I remember when the first Mario Party game came out.   My best friend and I badgered his father into driving us to the local Blockbuster to rent it for our weekend game-a-thon that we combined with Pepsi and Doritos.  Mario Party has come a long way since those days with more characters, more elaborate game boards, and hundreds of mini-games over the span of over 10 years.  Mario Party 9 was recently released and as I started to play I had the hope that it would carry on the tradition and give us a great party game for kids of all ages.

Mario Party 9 builds on the basic gameplay of previous titles (not counting MP8 and motion control mini-games).  What is new however is that this latest release has all of the characters travelling together throughout the stages instead of moving independently.  The game is broken down into party and solo game modes.  Each mode allows you to select your favourite character and adjust the game settings such as lowering the computer difficulty or adding a handicap so that each player starts with a selected number of mini stars to accommodate different skill levels.  The latter is a feature that can come in handy when playing with younger players as part of a family game night.  That being said, we played this title with our five year old who gave us a solid run for our money without adjusting any settings.  In party mode, there is also the option to select which stage you would like to play whereas in solo mode you work your way through each level as you progress through the game.

There are seven stages in total to play through: Toad Road, Boo’s Horror Castle, Magma Mine, Bob-omb Factory, Blooper Beach, Bowser Station, and DK’s Jungle Ruins (unlockable).  Every stage is uniquely designed with their own special characters, maps, and star placements.  In party mode, the ultimate goal of the game is to become the Superstar, which is achieved by collecting the most mini stars during gameplay.  In Solo mode you try to collect back as many stolen mini-stars as possible from Bowser.  Eventually you’ll have to beat Bowser in order to avoid having to play the level again. 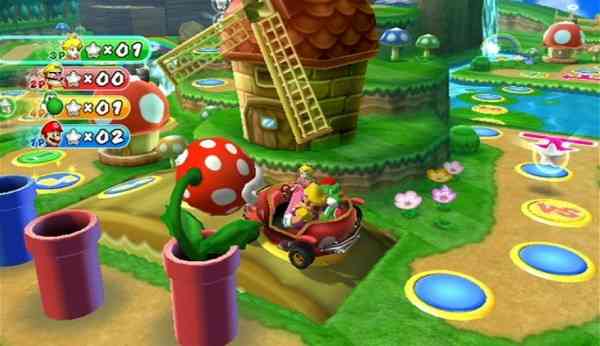 At the beginning of each stage you can take a few moments and learn about the level or you can just jump on in and play.  Play order is determined by a role of the dice and the character with the highest roll becomes the captain on the first turn.  Captain status rotates through all the players as each turn passes, giving everyone an opportunity to lead.  The roll of the dice determines the number of spaces travelled.  The standard is a 1-6 dice, but additional dice can be collected throughout the game by landing on a dice space (0-1, 1-2-3, 4-5-6, 1-10 or a slow dice) with the maximum number of special dice held in a hand being two.  If you selected to receive guide messages from Toad he will let you know how many spaces you need to avoid characters that can steal stars or how many spaces there are to a special item or mini stars, thus aiding in your decision of which dice to roll.

All characters travel together throughout the game board, with the captain rolling the dice to determine the number of spaces moved.  The player who is the captain will receive any mini stars or special items collected along the way and they may also face the effects of special spaces such as a Bowser space, lucky or unlucky space, or an event space which could either have positive or negative outcomes. Interestingly enough, there is a certain degree of strategy that comes with the captain position.  Depending on the standings and the dice roll, the captain can potentially set an opponent up to land on a space, such as a space with mini-ztars (negative stars), which will cause them to lose mini-stars.  They can also choose to land on a mini-game space in which they may be better at that mini-game then all others, which in turn will give them a slight advantage over the rest of the players.   Being the captain not only allows you to be the author of your own destiny, but the others players as well.

There are four categories of mini games: Free-for-All (all players compete independently), Bowser JR (two players join forces against Bowser Jr.), 1-vs.-Rivals (one player against the others), and lastly Boss Battle (all players fight collectively against a boss).  The mini-games are relatively straight forward and incorporate a variety of control options with the Wii Remote such as movement controls (e.g. the swinging of an axe), driving controls (Wii Remote is held horizontally using the directional pad and the 2 button), or simple point a click controls (holding the remote vertically and selecting items with the A button).  Each mini game provides a description of the controls as well as a practice mode so that you can get comfortable with the game.  The practice mode was very useful when playing with our five-year-old son as it allowed him a chance to understand the controls before moving on to the actual game where the results counted.  There is a fantastic variety of mini-games preventing too much repetition and keeping things exciting.  Though the games themselves are not overly complex some can prove quite challenging and do the trick of bringing out the competitive spirit of all players. 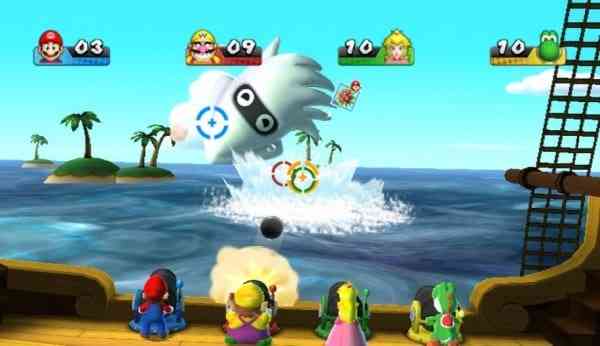 To complete a stage you will need to beat a boss battle towards the middle of the stage as well as a stage boss battle at the end.  Once the stage boss is defeated it is time to determine who collected the most mini-stars.  Should you opt to have the bonus star option turned on, bonus stars will be awarded to players based on set criteria such as the farthest spaces travelled or the most mini games won.  If it is a tight race at the end of the game the bonus mini stars may just tip the scales in someone’s favour to obtain the Superstar prize.

You are awarded Party Points at the end of a game that can be used in the Museum section to unlock a variety of items and special features.   You can purchase new vehicles for each stage (two new vehicles can be added that you can select from during gameplay), return stolen mini-stars to the night sky and view constellations, purchase sound clips, and even unlock a new stage to play.  To complete this well-rounded title, Mario Party 9 also features a mini-game section where you can select from a range of mini-games to play on their own.  You can also access the extras section to play extended versions of some of the in-game mini games including: Castle Clearout, Shell Soccer, Goomba Bowling and Perspective Mode.

Visually, it is quite surprising how much has not changed from the original Mario Party to this most recent instalment.  Sure the graphics are a lot smoother, refined, and fleshed out, but the basic design of the levels, characters, and the overall Mario theme has stayed fairly static.  To naysayers I say that this is not a negative thing as it keeps the familiar in the forefront and brings you into the Mario Universe, which plays on nostalgia quite well. 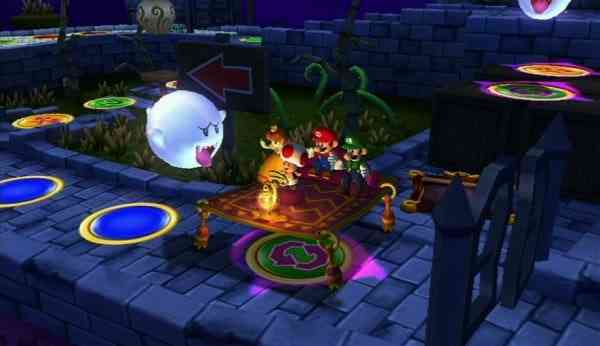 One thing that has improved through the times though is the game’s animations.  I noted that such things as the character scenes where Bowser floats around looking all menacing as he throws some Bowser spots into the mix, or when you are in a boss battle with enemies like Twhomp who walks around and squashes his prey whenever he can, all look very good.   As usual the colours are vivid and fit the overall theme, which is quite charming in the happier levels, such as Blooper Beach, or they can be quite menacing in levels like Boo’s Horror Castle or the Bob-Omb Factory.  Overall, the mantra of “If it ain’t broke, why fix it?” seems to be prevalent when it comes to the graphics of Mario Party 9, but it does look pretty good.

The sound of Mario yelling, “Wahooooo!” is a sure telltale sign that you are playing a Mario title, and other classic sound effects that mark the infamous franchise are spread out throughout the whole game.  Each character, from Mario to Wario, have their own distinct voice showcased throughout the game when encountering specific events like acquiring Mini-Stars and exclaiming “Ouch” when they get a bump, and they all have their own jump sound effect as well.  Each stage has its own unique background music, which is reminiscent of the musical style that fans have come to expect from Mario titles. Although the music is wonderfully composed, nothing stands out as remarkable or unique when it comes to bringing something new to the table.  Mini-game music, much like each stage’s music, keeps to the tried and true methods of previous Mario titles.

Mario Party fans and board game enthusiasts alike should rejoice as Nintendo has done it again.  Mario Party 9 has brought back what made Mario Party fun in its earlier days as they have combined the right amount of new mixed in with the old to make a well-rounded party title.  With the variety of new mini games and a twist to the original gameplay, with all players travelling together throughout the stages, Mario Party 9 has made good on promises of a fresh and exciting change of pace to this well-known franchise.