The words “Mario” and “Kart” are quite well known, especially when the two are put together.  A quick search of the interwebz indicates that the Nintendo’s Mario Kart franchise was first released in 1992 and since then it has graced so many of their home and handheld consoles that it’s rare to find anyone that has not seen or played the game.  Well it’s the Wii U’s turn to get its own version with Mario Kart 8.  I had the chance to preview the game at E3 last year and I was excited for what was to come.  We were lucky to get an early retail copy and after playing the game on my own, and with my kids, over the past few days I have to say that Mario Kart has never looked so good, and it plays just as well.

The premise of Mario Kart is simple; pick a franchise character and race against other franchise characters in an effort to win various championship cups or beat friends in some multiplayer fun.  Mario Kart 8 is kart racing refined and it should be given how long Nintendo has been putting out this series.  You can powerslide around corners with ease, and there is a sense of urgency in the higher classes (e.g. 150cc) where you need to plan your race lines with precision, from choosing the right branch in the road to taking a risk to find and use a shortcut.  You will also want to hit as many speed boosts as possible to keep you ahead of the pack too.  Racing with 11 other franchise characters is a blast.  Having that many foes to fend off while navigating one of the many tracks is truly enjoyable and it’s the power of the Wii U that allows for this mix of gameplay elements to form together to provide an pleasant racing experience.

New to Mario Kart is the element of anti-gravity, as you can now race on walls and upside down.  This adds a new twist as the tracks themselves take on new design features.  Not only that, but bumping and grinding with other racers is also quite different.  You have to time your bump of another racer perfectly as you may cause them to get a speed boost as you spin out of control while on a wall or hanging upside down looking at the ground.  It’s a neat new gameplay element and something that people should enjoy. 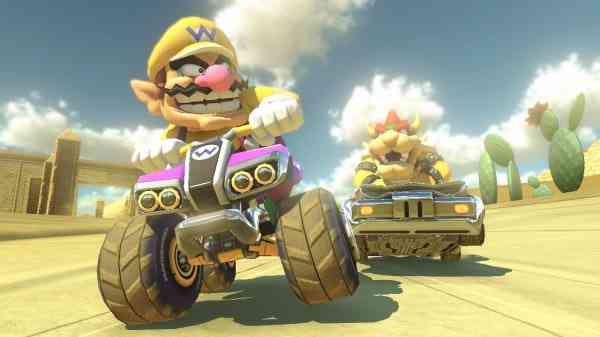 There are 30 playable characters in Mario Kart 8, including your own Mii.  The selection is not that bad, but in many ways I believe that there could have been more.  There are quite a few ‘baby’ versions of some of the existing characters, and there are the Koopalings this time around.  Personally I would have liked to have seen a few more other characters as this is one of the ‘premiere’ games for the Wii U in 2014, but in the end there are lots of loveable franchise characters available once everything is opened up and I am sure most will be happy.

One of the more addictive aspects of the game, apart from just racing, is the need to collect coins while on the track.  As you progressively collect more coins new karts and options (e.g. tires and parachutes/hang gliders) open up.  As I played I was fascinated to see how my kids got excited to see what would open next.  They were giddy with excitement and anticipation to look at the next kart that was opened, or the next set of original wheels (e.g. buttons!) that would we could put on a kart.  I was surprised that something so small was an added part of their enthusiasm to keep playing.

Of course what would a Mario Kart game be without an abundance of power-ups?  You’ll find the traditional green and red shells, bananas, speed mushrooms and power stars to name a few.  Of course the dreaded blue shell also makes a return.  There are also a few new power-ups too, including the piranha plant, boomerang, and horn.  The latter new power-up is important as it has the ability to blow up a blue shell before it hits you.  As me or my kids played there were more than a few times in the upper class races that we got bombarded by some untimely power-ups from the A.I, but this is what makes Mario Kart what it is.  You may get frustrated now and then with this aspect, but to tell you the truth I didn’t always find it as frustrating as in the past given there were still chances to maintain a lead, or claw back and get to the front again.

The bulk of the single player is the Grand Prix racing.  There are a total of 8 Grand Prix Cups (trophies) for you to battle for.  Each cup consists of a series of 4 races.  With that in mind, there are a total of 16 newly designed tracks and a total of 16 retro tracks based off of previous versions of Mario Kart.  There are also 50cc, 100cc and 150cc classes to race, the latter being the more difficult providing more than enough challenge for many gamers out there.  All in all there is a lot of grand prix racing to be done here, but that is not all, as you can also race in a time attack like mode as well as compete against ghosts of other players.  So as a single player game there is a lot of replay value. 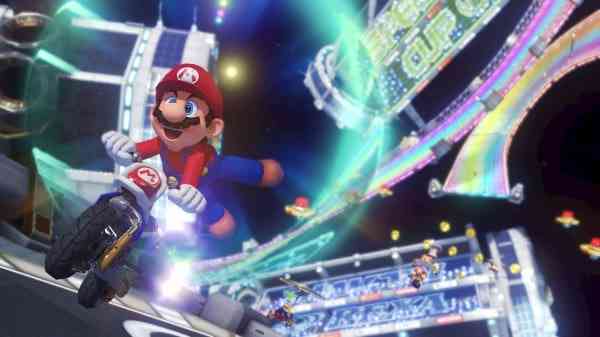 Mario Kart 8 also offers up a nice selection of multiplayer modes.  There is 2-player and 4-player split screen local play as well as online modes that allow you to race against up to 11 other people over the internet.  You can also have 2 players play online on the same Wii U at the same time.  There are online races and online tournaments with strangers and friends too.  I found that most of the multiplayer fun during my review time came in local multiplayer play.  Sitting down with my kids, or watching my kids play with friends in the same room, was a blast.  Playful banter amongst all heightened the gameplay and brought back some great memories of a time when we could only game with friends on the same console.   The only complaint I have here is that the GamePad screen should have been used as its own screen and the TV could have been used for other racers, especially in 2-player races.  There is also a neat highlight feature worth mentioning.  You can upload edited clips of your race highlights to directly to YouTube via the Mario Kart TV mode.  There is a simple editor and putting a highlight reel together and on YouTube is a simple task.

Although the online features seem a little more robust then other Wii U games, there are some issues with the implementation of such.  Of note is that communication with others is limited to the lobby and by text bubbles only.  There is also no way for you to directly invite any one on your Wii U’s friends list.  This is a huge knock for online play as getting an online game going with a group of friends takes pre-planning.  As well, not being able to chat during an online race itself is frustrating, especially when playing with people you know.  I found this a step backwards given how the Xbox One and PS4’s online infrastructure is implemented.

Generally speaking, I also have another complaint, and that is Mario Kart 8’s battle mode.  In the past this mode has been a great change of pace as you battle it out with other karts in specifically designed arenas trying to keep your balloons from being popped as you try to pop others.  In Mario Kart 8 you play this mode on tracks that you regularly race on.  Gone are great battle arenas and with it gone is the excitement that comes with battle mode.  I don’t know why the change, but regardless I think this is an area that should have remained the same as found in previous Mario Karts as it was a highlight in the past. 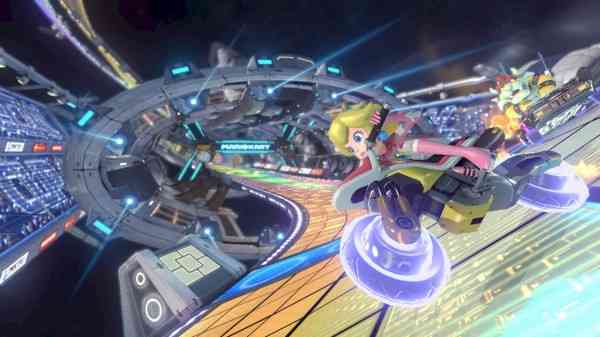 Visually Mario Kart 8 is a stunner, but I would expect no different from a first party game on the Wii U.  It’s vibrant and colourful and communicates the world of kart racing in the Nintendo universe quite well.  From the new tracks like Mario Kart Stadium, Twisted Mansion or Mount Wario to the retro inspired remakes of Moo Moo Meadows, Cheep Cheep Beach and Rainbow Road, they all look great.  There are lots of different surfaces to race on in all these tracks, from dry desert sand, raging water, icy mountain areas, to under water sections and brick platforms floating on lava.  Lighting and special effects are in full force in too.  You’ll want to watch your race highlights more than a few times as this will only further your appreciation for the game’s visuals.  From vehicle shocks compressing to sand or snow sticking on the treads of your tires you’ll miss these details as you race.  There is a lot of detail in each and every track, vehicle and character animation, and it really shows when you watch your race highlights.

Finally, as for the sound, what much is there to say?  The music sounds very familiar and you’ll not only recognize some memorable music of the past, but hear some great remixes and new music too.  Character wise there is the traditional sounds that come characters as they pull off power moves, face times of defeat, and those that just communicate happiness.  As for the sound effects, cartoony is the first word that comes to mind, but yet you’ll find more realistic environmental effects as well such as the sound of rushing water, jet planes taking off at an airport, or the wind blowing up the desert sand.  Overall the game’s audio is a great compliment to the visuals, and adds to the overall presentation package.

There is no doubt that Mario Kart 8 is a great game, plain and simple.  With the power of the Wii U at their disposal Nintendo has been able to create some really great looking tracks, add a lot more racers for you to compete against, and there is a fairly robust local and online multiplayer component for fans to enjoy.  But don’t get me wrong, there is also a bump or two that along the road to greatness as well.  At the end of the day if you have a Wii U you’d be crazy not to pick up this game.  If you’re still don’t own a Wii U Mario Kart 8 is yet another title to make you realize that Nintendo’s “next-gen” machine is capable of great games that the whole family can enjoy.

Next The Incredible Adventures of Van Helsing II (PC) Review – Borgovia: ROUND 2, One Hell of an Adventure
Previous Scram Kitty and his Buddy on Rails (Wii U eShop) Review – We Love Cats, Honest!