Himalaya Studios’ Mage’s Initiation: Reign of the Elements took ten years to make, but it’s finally out, five years after its successful Kickstarter. Inspired by Quest for Glory, one of the most seminal hybrid adventure/role-playing games released in the late 1980s, Mage’s Initiation is a modern throwback to a classic, half-forgotten genre.

In Mage’s Initiation, the player controls D’arc, a mage in a world where only a few special people are born with magic: everyone else is the Giftless. The mages control pretty much everything, and people are alternatively resentful or grateful for it. D’arc himself is having dreams of becoming a powerful mage, but first must complete his training by fulfilling three different tasks in a day.

I haven’t played the original Quest for Glory, so there’s a lot of nostalgia-driven material that is, unfortunately, completely lost on me. However, the classic fantasy atmosphere of all the NPCs and the environment was great—it made me feel like I was playing in an interactive version of those cheesy old high fantasy book covers, à la Wheel of Time. 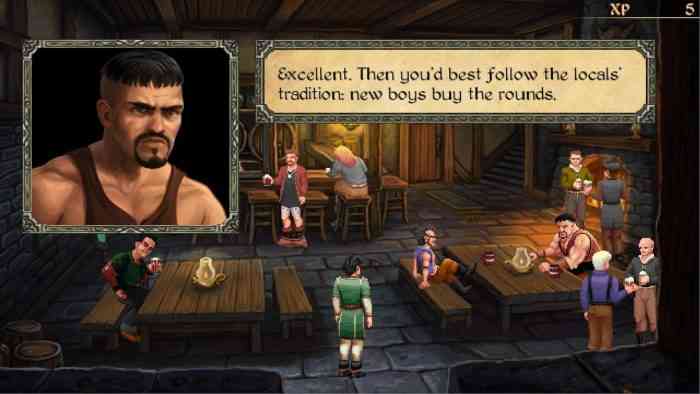 The point-and-click aspects of Mage’s Initiation worked as I expected, and D’arc’s narration was usually funny and likable as I navigated the world, solving puzzles that I often felt too stupid to get (that’s just me with every point-and-click adventure game, though, I promise).

While I enjoyed the parts of the story that relied on exploring the beautiful pixel art laid out throughout the game, the combat felt particularly lacking. There was a Conductor designed for different gems to go into to improve combat, but no matter what was going on, there was no getting around that every fight was D’arc, who has no short-range spells, running in circles away from close-range enemies as he fires (and often misses) his attacks. Sure, you can run away, but it often takes forever, and combat was rarely satisfying.

This was compounded by a frustrating experience I had early on. I, looking for planks, went into a forest that turned out to be a maze I wasn’t prepared to memorize, having had no idea that that’s what it is. I got hopelessly lose in a dark and depressing forest where most of the visuals were almost identical from one space to another. This would have been manageable, except that every thirty seconds or less, a goblin would spawn and attack me.

These fights usually weren’t hard, but they were tedious, as I either had to run away for an extended period of time or run in circles to kill the goblin. It took me an hour to find my way out, and it tainted my experience of the game even when I was back bothering the blacksmith about nailing some planks together.

I’m finding myself struggling to say more about the experience of playing Mage’s Initiation: it was fun, it was pretty, it was occasionally frustrating. It didn’t really grab me, and I think much of the humor and story relies on loyal fans of Quest for Glory picking up the title. That said, I still think the average person, especially if they like point-and-click adventure games, would find something of value in this celebration of old-school fantasy aesthetics. Mage’s Initiation might suffer from aiming itself at nostalgic fans of a bygone era of gaming, but when someone new stumbles on it, they’ll have themselves a good time…as long as they avoid forests.

Lost In Play Bringing the Nostalgia This Summer