Madden NFL 25 (Xbox One) Review – Trade in Your Current Gen Madden 25 Now, This is the Madden Game to Own!

When I reviewed Madden 25 for the Xbox 360 a few months ago, I admit I may have been a tad harsh. It is not that I didn’t enjoy the game, but I felt the development team didn’t do enough to push the franchise forward. I was frustrated with some of the freezing issues, the lackluster visuals, toned down pass leads and dammit Pete Carroll looked an elderly middle linebacker in a golf shirt! Simply put, it was little too much of the same old for me. Over the course of the past week, I had a chance to sink my teeth into the Xbox One version of Madden 25. All the game modes from the current gen Madden 25 make its way on the Xbox One version. So if you own the current gen Madden 25, why should you pick up the next gen version? Plain and simple, it’s better. The jump from Madden 25 on the Xbox 360 to the Xbox One is significant. It is much more significant than I anticipated. It is easily the biggest leap I have seen in the franchise for several years.

The first noticeable leap comes in the form of the visuals. Hands down, it is the best the stadiums and fans have ever looked. CenturyLink in Seattle for instance comes to life. The detail and even the backgrounds look amazing. The Hawks nest which is a seating area close to where my season tickets are located is perfectly detailed. It is truly a treat to watch how all the stadiums have been so perfectly designed and brought to life in the game. The fans have also received a massive upgrade as they have all been detailed to replicate what typical NFL fans will look like on game days. Some are wearing home jerseys, some are wearing away and some are just wearing winter coats and tuques. Bottom line, no two fans seem alike and for the first time in recent memory the fans now really feel like they are part of the game. Say goodbye to cardboard cut-out fans. 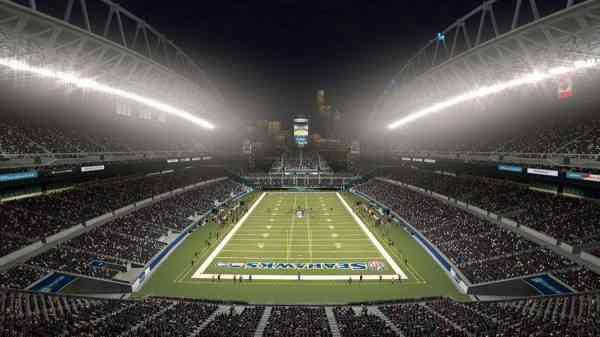 The improvements don’t stop with the just the venues and the spectators either. The players themselves, the improved lighting and even every little blade of grass have been rendered with better overall fidelity. The player’s skin looks more detailed and facial expressions appear much more life-like. RG3 and Kaepernick, for instance, look very close to their real-life counterpart. At least when it comes to their faces and how they usually wear their uniforms. Many of the player’s tattoos are noticeably missing and some of the NFL’ers don’t exactly look all that similar to their counterpart, but overall it is easily the best the players have looked in the franchise to date. And the good news is it can only get better from here.

The menus have also been given a new splash of paint and navigating in the menus is as smooth as ever. I am sure downloading the game to you Xbox One helps speed up the navigating. Regardless, I certainly enjoyed moving through those windows-like panels with blazing speed. Compared the Xbox 360 version it’s night and day. Madden 25 on the Xbox One loads quickly and being able to jump into a game in seconds is fantastic. This also applies with online gamers. I cannot count how many times I would fire up my Xbox 360 and it would take an eternity to get in an online game. The Madden 25 online experience is drastically faster and just a better experience when it comes to getting a game going.

Another noticeable change from the current gen to next gen comes in the form of the rushing attack. Now we all know the development team has focused on the running game this year but there are even some differences between the two consoles. For instances, quickly cutting and moving your running back takes a little more time on the Xbox One. You have to be more deliberate with your actions and stick to your running lanes. This Madden 25 game (more than any other Madden game) factors in your running backs speed, elusiveness, size, and momentum when running the ball. It is more realistic which makes cutting and avoiding defenders a little harder. Before you snap the ball you have to survey the field and plan your moves. Players like Brandon Jacobs and Mike Tolbert cannot cut on a dime and rush for 100-yards with ease. Frankly, they should not be able to do that because it doesn’t happen in real life. Likewise, you should not be able to rush for 300-yards per game like that certain guy does with Adrian Peterson in our 25-man online 360 league. This is not to say it cannot be done with the Xbox One Madden but it should be a little tougher and for me it was. 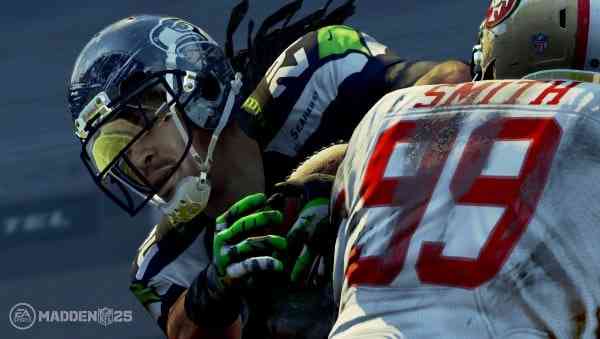 The blocking seems a little tighter on the Xbox One. Some of the blitzes I was able to pull off with ease on the 360 simply don’t work on the Xbox One. The offensive lineman seem smarter and are able to pick up blitzing linebackers or corner backs better than ever. I admit I have few dynamite blitzes I use in my current generation league. Well unfortunately they don’t work on the Xbox One which to me is not a bad thing as the lineman are reacting and adjusting on the fly like they would in a real game. I should also mention defensive lineman apply more pressure on the QB. Much more when compared to the 360 version. There were many instances I didn’t have much time in the pocket, so I had to make my reads and get rid of the ball fast. There were times I felt like I had all day in the pocket on the 360, but on the Xbox One if I didn’t get rid of the ball in less than 4-seconds, I was toast.

As far as the passing mechanics are concerned, I didn’t notice much of a difference. ‘Total Control Passing’ is back and you cannot lead your receivers to the inside or outside as much as you could in Madden 13. I liked the freedom I had last year when it comes to the passing game but I understand why the development team toned it down as Madden 13’s precision passing lead to some significant online exploits. So those current gen Madden 25 fans who enjoy running pass hungry offences should be able to pick up where they left off.

With that in mind, I found the defenses a little stronger on the Xbox One version. For instance, some of the corner routes and smarted routed out routes can easily burn man defences on current gen. I wasn’t having the same kind of success with the Xbox One Madden game. I am not certain if this is due to a more responsive defence or if it has something to do with the player’s inability to cut as quickly as they could on current gen. Whatever the case may be, things seem a little less predictable and certainly more challenging, which is a good thing right? It is that unpredictable element that the Madden franchise strives to achieve and I believe they certainly moved closer to that with Madden 25 on the Xbox One. 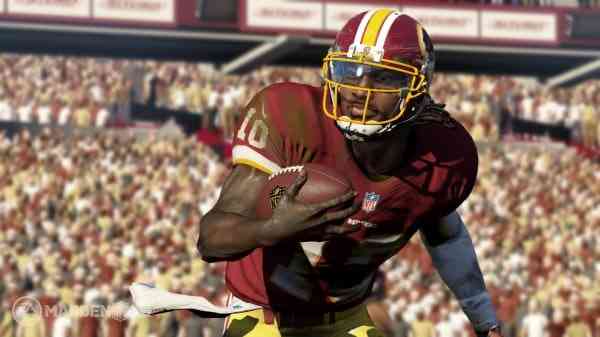 I think that just about covers it with this Madden game. If you want a more detailed review which examines all the new features that comes with Madden 25, you can read my Xbox 360 review HERE. On closing note I should mention you can transfer your existing MUT team from your 360 to your Xbox One. When you first fire up the game, you are given some basic instructions on how to do so. As for you Connected Career however you will need to start a new one on the Xbox One.

Next Mario Party: Island Tour (3DS) Review – Islands and Islands of Fun
Previous The Incredible Adventures of Van Helsing I – Complete Pack (PC) Review – A Whole Lot of Content, and a Few Fixes Too