Despite the fact the Xbox Live Arcade (XBLA) has some great titles, for one reason or another I have found it hard to find a good racing game. Fortunately Techland, developers of Call of Juarez and Dead Island, have stepped up to the challenge with “Mad Riders”.  They have made several other racing games in the past, but I am afraid I have yet to play any of them.  Regardless, Mad Riders comes along at a time I was craving for a good racer at an affordable price.  Well after some extended playtime, Mad Riders was not only mad fun but for 800 points you cannot go wrong.

I will cut right to the chase as the ‘meat and potatoes’ of the game is the “Tournament” mode.  This mode features eight different locations, each with a different theme (e.g. rain forest with Aztec-style temples, island jungles, etc.). Each area has five events where you earn up to three stars based on your performance. You can unlock more locations and “Elite” challenges by earning enough stars.  This system is simple but effective.  Not to mention it is very addicting as well as I found I just needed to have all the stars. 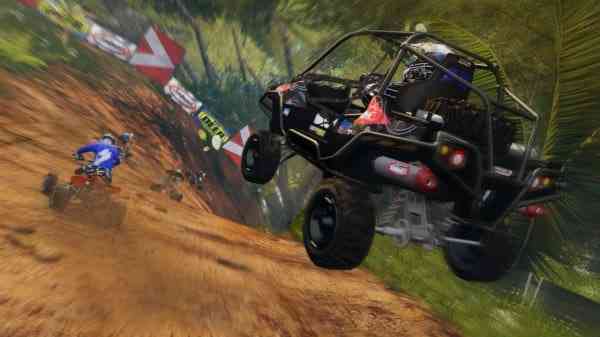 Events vary from standard races against other CPU-controlled players, to beat-the-clock challenges. There are also “stunt races”, where the goal is to perform risky moves to gain more points than your opposition. Another race type puts you in a large “arena” and has you going from one checkpoint to another. This last mode was my least favourite because the computer-controlled opponents seemed to have an advantage by knowing where the next checkpoint would be before you did.

After playing through the first few locations I was really impressed with the sense of speed the game provided.  At times it almost felt too fast as I found myself hitting walls that crept up too quickly. As you win races and perform stunts, you earn Experience Points and gain levels.  I just loved the way the game steadily rewards you with new content. By the time I reached the third location, I had unlocked several new skins for my rider and up to four new bikes! In addition, each bike can be custom-coloured, part-by-part, which was a nice touch. Rider skins come in a wide variety, from colourful racing suits, to full costumes like a mummy or a cap-wearing gorilla.

There really isn’t that much I can complain about the game, but it’s not perfect. When making huge jumps, bumping into other riders can send you flying out of control and out of bounds. Also, there is no map of the track to tell you where you are and what is coming up, or where the other drivers are. The only indication of where the other drivers are is in the bottom of the screen, showing how many seconds away the next racer is. You need to also watch where you are landing after a jump.  There were a few times I thought I was coming down on part of the track just to get a message popping up saying I was out of bounds.

Visually speaking, the game is very nice to look at. Colours are vibrant, with objects having a slight cell-shaded to look to them. There was very little “pop in” of distant objects that I could see. The ATVs and riders look great and react well with your surroundings. 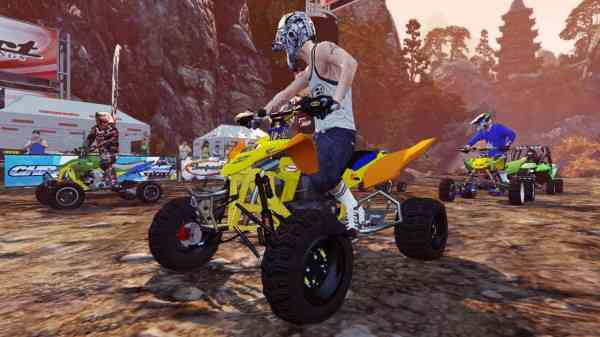 In terms of the audio department the game is a headbanger’s delight. As you sail through the tracks you are treated to some great tunes that fit the theme well.  Let’s just say if they sold the soundtrack I would buy it. The sound effects are well-balanced and fit well from the sound of the engines to the crashing of the bikes. There is an announcer that chimes in now and then when you execute certain stunt moves. You’re going to be hearing “Sidewinder!” often.

When you consider all the content you get for 800 Microsoft points, Mad Riders is about as good as it gets on XBLA. Mad Riders features hours of enjoyable, fast and addictive gameplay.  It will inevitably leave you itching for your next race.  The online multiplayer, and more locations added via DLC in future, should keep the lasting appeal quite high.  At the end of the day, you really cannot go wrong. 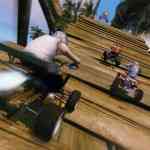 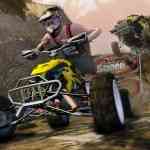 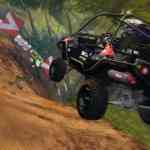 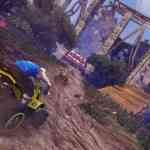 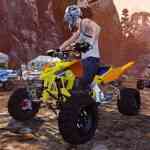 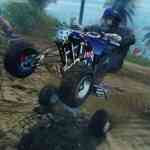