To say that I have been in the market for a new keyboard for my PC would be an understatement.  Every time I look down at my ‘el cheapo’ keyboard I become disgusted with myself as that nasty collection of crumbs, cat hair and other unidentified food particles screams get “rid of me dammit”.  Despite my disgust, I have been loyal to old ‘el cheapo’ as frankly buying a new keyboard has never been a priority for me. I have to admit, I don’t do a lot of PC gaming so while I do enjoy having a decent mouse, a high end gaming keyboard was something I just assumed would never give any kind of advantage while gaming.  Boy was I wrong.  Over the past couple of weeks I had a chance to give the Mad Catz S.T.R.I.K.E.7 Professional Gaming Keyboard spin and I have to say my opinion on gaming keyboards has taken a dramatic shift as the S.T.R.I.K.E.7 is the most dynamic and incredible keyboard I have ever had a chance to play with.

Granted, I do not have extensive experience with gaming specific keyboards so you do have to take this review with some grain of salt.  Sure I play the odd PC game here and there but I am by no means one of those guys who will log in 60-hours a week PC gaming.  That said, over the past week I have scoured the internet for other similar keyboards and after some research it the S.T.R.I.K.E.7 seems to be the best bang for the buck.  Sure the $300 price tag will leave many gasping but after you see what this thing is all about you will be impressed as it is easily one of the more unique gaming keyboards I have ever had a chance to play. 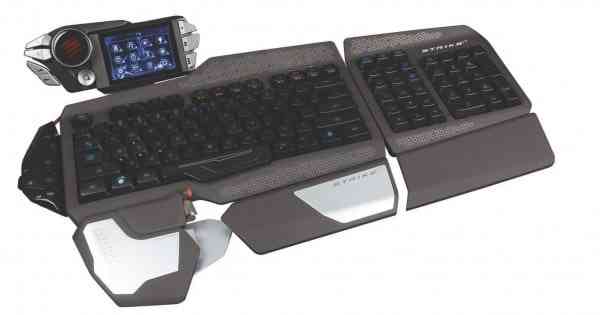 The packaging, unboxing and subsequent set up of the keyboard was fairly straight forward.  I didn’t quite hook up the main keyboard and the 5 modules in the order I was supposed to which lead to some issues when I tried to download the latest S.T.R.I.K.E.7 software on cyborggaming.com.  Yet once I eventually hooked up the five modular pieces, cables and AC plug as they were intended to go everything was up and running in no time.  All in all, hooking up the keyboard was fairly easy and took less than 20-minutes.

One thing that really caught my attention before I get into the ‘nitty gritty’ details of the keyboard is the professional quality of the box and all its contents.  The box and the packaging look great and nothing looks cheap about it at all.  Mad Catz was once thought of as a cheap third party company who manufactured cheap plastic gaming accessories.  Well clearly Mad Catz has moved away from that direction and they now publish fantastic quality products and the S.T.R.I.K.E.7 is no exception. Everything you need is included in the box and the handy dandy quick set up guide is extremely helpful.  There is also a more detailed instruction manual included which is always nice.  Bottom line the packaging and all its contents screams high end.

The main keyboard itself is also very slick looking.  The braided cables are of high quality and the palm and wrist rests have a smooth rubberized texture.  The function script has a piano black finish and the metal chassis is also very impressive.  The keyboard itself is fairly heavy but is built in such a manner so that it does not move around much on your desk or gaming set up.  The metal and rubber keyboard stands are also of high quality.  Even the accessory box with the 2 sets of arrow keys, a unique Alan key, screws and w/a/s/d keys is of terrific quality for those that know gaming keys.  The Alan key is worth mentioning as even something as simple as an Alan key has the Cyborg branding and a unique handle.  Not one detail was overlooked in the development of this keyboard.  Heck even the 2 USB high speed ports is a nice little touch.  I should note you can avoid using the AC plug if you want and connect the main keyboard to the PC on its own.  You just need to use a standard mini USB to USB cable and it will work.  This being said, the backlighting will default to red and is not adjustable in this configuration.  And yes, for those curious, the S.T.R.I.K.E.7 does support Windows 8. 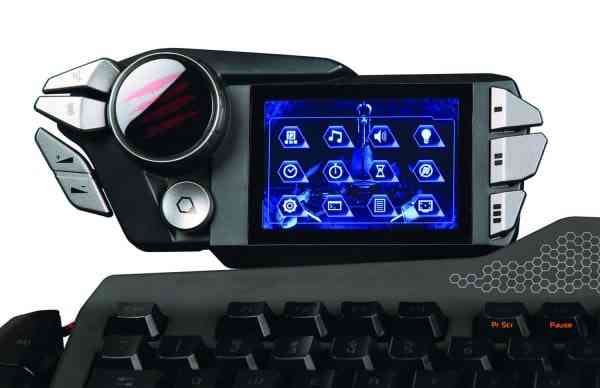 Now I have yet to mention the keyboards biggest selling feature and that is the V.E.N.O.M. touchscreen which deserves a section all by itself.  To say that this little touchscreen is impressive would be an understatement.  Not only does the screen look incredibly slick with the Mad Catz logo, volume and speaker mute button controls on the left side, macro buttons on the right side and of course the screen itself looks kick ass.  The touchscreen is truly the core of the S.T.R.I.K.E.7 keyboard and includes a glut of quick access functions that any hardcore gamer requires.  On the screen you have the program specific volume control, custom macro button layout, quick launch of programs/games/apps, a journal for making game specific notes, teamspeak, backlighting adjustment, a clock, timer, window key locking and media controls.  Selecting the different apps is all accomplished with the touch screen.  The icons are somewhat small making for screen does not always respond the way you want it to.  I anticipate a firmware update down the road because at times the volume control did not respond as it should.  Despite this, the screen does respond as it should and well it is pretty darn cool.

Instead of examining all the features of the touchscreen I will just zero in on a few of my favorites.  For starters, I love the backlight and brightness options.  Being able to change the backlight of the keyboard is fantastic.  I was also impressed that the lights also change on not only the numberpad, but also the function script is backlit as well.  There are a number of colours to choose from which makes gaming in the dark a pleasure.  The quick launch of programs is also another fantastic feature and one that will be embraced by those hardcore PC gamers.  What this allows you to do is call up a visual layout of programs, folders or even websites which will load with a quick tap of the appropriate button on the screen. The pre-designed icons are provided for most leading programs; however, users can import or create their own images.  The volume control is another great addition to the touch screen in that it allows you to control mic volume, in game volume and even the volume for such things as communicating with others in Skype. 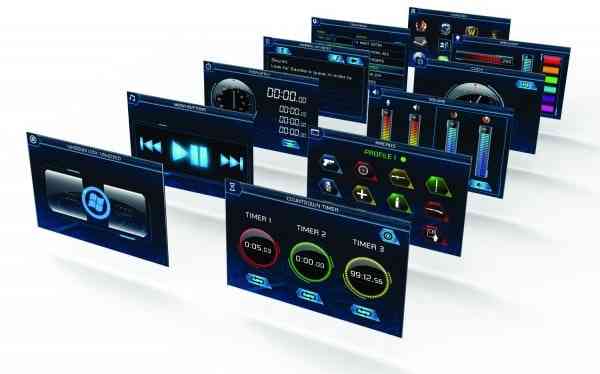 Much like other gaming keyboards, the S.T.R.I.K.E.7 provides gamers with macro buttons that can be programmed to carry out a variety of keyboard presses.  The difference with the S.T.R.I.K.E.7 however is that you do not have to remember what has been programmed where.  The Macro App on the V.E.N.O.M. touchscreen allows you to assign a different icon to each macro command displayed on the touchscreen, serving as a visual reminder to what effect the macro will have when launched in game. Pretty cool stuff indeed

As I mentioned the entire keyboard package has been built with the 5 modular pieces.  You can attach the touchscreen to the numberpad if you want or detach the numberpad all together to allow for more room for those with restricted desk space or for those like myself who operate on a tiny keyboard tray.  Needless to say, there are plenty of configurations and the quick assembly guide on the gives you a visual of all the different layouts at your disposal.  The wrist rest and the palm rest are also detachable.  The palm rest is particularly noteworthy as there is an action button and metal thumb wheel on the actual palm rest. The keys on the numberpad have different heights as well.  The arrow keys are slightly higher than the corresponding keys above them which can be helpful in terms of limiting the amount of times you accidently hit other keys.

Overall, the Mad Catz S.T.R.I.K.E.7 Professional Gaming Keyboard is about as good as it gets in terms of a rock solid gaming keyboard for your PC.  It comes in with a hefty price tag; however, the S.T.R.I.K.E.7 is a long term investment and one you will not be disappointed with.  The V.E.N.O.M touchscreen alone is worth the price of admission as it allows you to tinker with so many different options, volume controls, and even the backlighting on your keyboard to name a few.  If you are in the market for a high end gaming keyboard then look no further as the S.T.R.I.K.E.7 is for you.