It’s hard to hate and love a game at the same time. Lovely Planet teeters on the brink of being annoyingly repetitive, while joyfully addictive. This bizarre, glee-injected shooter will have you smiling from the initial blast of colour and upbeat tempo, but the novelty soon wears thin. Joy turns into frustration, and frustration turns into an inevitable rage quit. Prepare to play a game that’s easy to pick up but arduous to master.

Lovely Planet is a minimalist speed run FPS that demands fast twitch reflexes and memorization of the events in front of you. There’s no story and you only get one weapon, that’s it. Controls are easy to learn with just shoot and jump buttons, but it’s how accurately you’ll shoot and jump that will determine your success. Each level is an obstacle course filled with angry red squares shooting at you, moving red blobs or giant apples that rain from the sky. Earn a total of 3 stars based on your performance: 1 Star – kill all the baddies, 2 Stars – Beat the required level time, 3 Stars – 100 percent accuracy (you can’t even miss once).

Here’s where things get slippery; so many factors in the course will cause you to restart. If you die, an apple falls on the ground, you don’t kill every enemy, shoot a neutral square or fall off the course — go back to start. At first you do simple runs getting the hang of running and gunning, things seem pretty laid back and fun, but as the game progresses the levels become increasingly difficult and you need to rely on learning the flow of the map to successfully navigate it. Lovely Planet is unforgiving and some areas will expect a perfectly executed run to pass. The rinse and repeat method is tolerable for a bit, but after a while it really begins to wear your patience. The design becomes an annoyance rather than a joy and you end up losing all will to continue, not just because of the ramped up difficulty but because there’s not enough substance to motivate you.

“The world is lifeless and bland, worst of all the enemies look like they were made on a basic paint program.”

I’ll come right out of the gate and say the graphics in Lovely Planet are abysmal. The world is lifeless and bland, worst of all the enemies look like they were made on a basic paint program. Understandably, this is a simplistic shooter but when an enemy is just a red blob it feels lazy. There could have been some creative direction here; give the red blob a face, make the red blob into a creature, but to just say “shoot this red mass and this square” — I really can’t give any points for originality or concept. 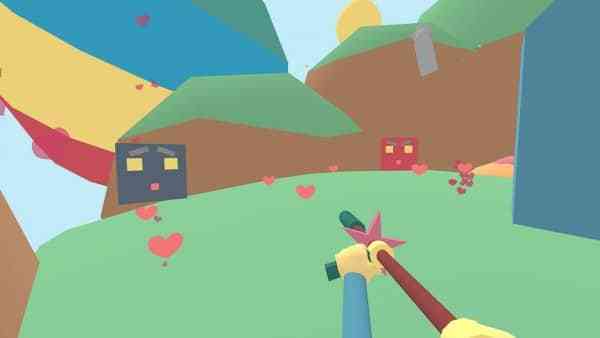 As the name suggests, the music is lovely, with jazzy trance-inducing melodies and the occasional ‘yay’ – I guess this is the part where i’m supposed to feel all warm and fuzzy inside. The soundtrack does do a good job of energizing you, complimenting the joyous fast-paced nature of the levels. I often found myself humming the tune of some of the songs and had to snap myself out of it. Beyond that it’s just simple sound effects. It is important however, to listen for the sound of an apple launching because it won’t always be in your immediate line of sight.

“While the graphics and enemies are less than desirable, the music releases an inner childlike sense of happiness that keeps you coming back for more punishment.”

For what it is, Lovely Planet is a decent speed run shooter that’s easy to pick up, with an art style channeling Katamari Damacy. While the graphics and enemies are less than desirable, the music releases an inner childlike sense of happiness that keeps you coming back for more punishment. The game play is downright addictive and you’ll feel like an acrobatic hot-shot when you master the art of the run and gun. If you’re looking for a quick fix, timed trial based shooter that will eat up a few hours, Lovely Planet will not disappoint — and hey, you might even catch yourself in a smile while playing too. 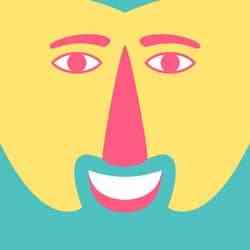