I’ll admit it; I’m a fan of the LittleBigPlanet (LBP) series. It’s adorable, quirky, and can be the simplest or most complex game you want it to be. Heavily based on user creations, LBP is a game that connects people all over the world by allowing the opportunity to share or experience various ideas brought to life. It’s my family’s go-to game for nonstop laughter and fun. The difference this time around is that Sumo Digital is taking Media Molecules role as the developers for the game. This was concerning to me as Media Molecule worked on past LBP games and the delightful Tearaway (which I also reviewed). Nevertheless, I went in with a fresh and clear outlook and was ready for Stephen Fry’s cheeky narrating to reunite me with Sackboy and also meet his new pals.

This time around, the story (named Adventure mode) takes place in Bunkum where the previously sealed away Titans have been released and use the new antagonist, Newton, as their puppet to put an end to creativity. It’s up to Sackboy to awaken the three original heroes – Oddsock, Toggle, and Swoop – who sealed the Titans away before to make a return. 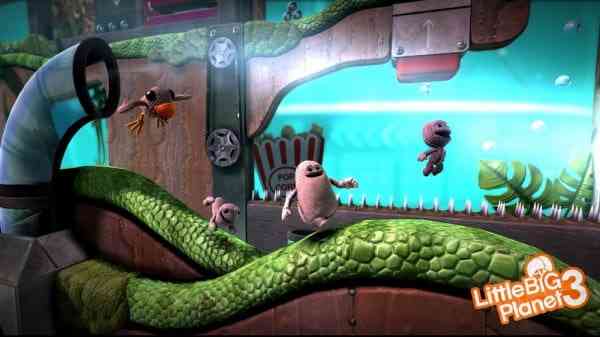 First, we have the dog or horse-like character called Oddsock who can jump off and slide on walls. Second, we have Toggle who can change, or more precisely, toggle between two polar-opposite forms. Imagine a big sack of potatoes, now put two button eyes on it, and finish it off with some arms and legs – you have just pieced together Toggle’s first form. This form is where Toggle can use its hefty weight to break things or bring things to the ground so when it toggles into its second form, gets flung up due to the disappearance of the hefty weight. For Toggle’s second form, imagine a tiny hacky sack, add some button eyes, and finish it off again with some arms and legs – now you got Toggles final and second form. This is where Toggle can squeeze through small passages no other character can go through. Lastly, we have the straightforward bird character named Swoop who can carry items with its talons and yes, fly. The characters, like Sackboy, are quirky, adorable, and simply just loveable. The way they look and the abilities they have are just perfect and is a wonderful addition to the game.

LBP3’s story mode, unlike previous instalments, isn’t presented in a linear fashion but instead utilizes hub-like levels to access other linked levels. In addition, a tool called the Organizatron acts as a quest guide and mapper for you to see what quests are available or completed and what level-link to access them from. It’s a nice little change from the completely linear LBP games in the past. Unfortunately, Adventure mode only contains a prologue planet and three additional planets each containing around eleven levels. Within these eleven levels, only about 4 of them are directly related to the story. The rest are just sub-levels or mini games that are not mandatory for you to complete as it does not affect the story. This makes the story extremely short and has you yearning for more. Even more upsetting, the new characters are only playable on their specific planet and aren’t capable of attempting levels in other planets or even venturing out together to aid one another. The only time is at the final boss, a community level, or in your own pod. Regardless, the levels presented in Adventure mode utilize the new features offered in LBP3 in a way that is interactive and made me awe over.

Co-op continues to be amazing in LBP3 either locally or online with some minor exceptions. Unlike LBP2, cutscenes focus exclusively on player one and does not include other players present in Adventure mode. Also, x4 player activities in levels are absent or otherwise rare to find. Activities of x2 players are scattered around, but don’t have the same challenging aspects that require you to actually think and work with your partner. These are just small differences compared to LBP2 that aren’t at all a major problem. You could say it’s just my little pet peeve. 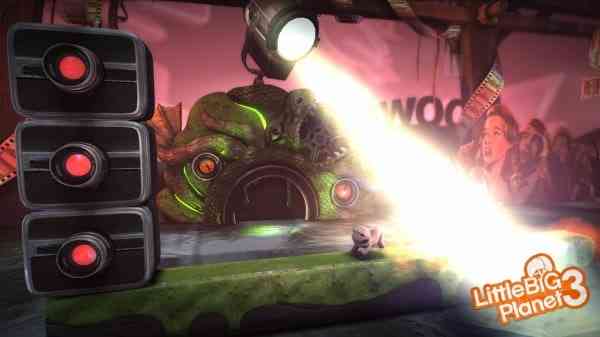 Creator mode and Community mode are exactly like LBP2 just expanded. The series is at its pinnacle of creativity with these two modes. Instead of the original three layers, LBP3 has sixteen layers for you to work with and play on allowing levels to have more depth and complexity, various new creative tools lets you create stuff previously difficult to create such as top-down view games, new power-ups in sackboy’s sackpocket are available to obtain abilities making progression through levels have much more variety, and lastly LBP3 is fully backwards compatible meaning costumes, levels, etc. from previous instalments are playable and usable in LBP3. It’s all of the old jam-packed with the new.

Presentation through voice and visuals are the best they can be. The voice work is engaging and perfectly gives life to each character in their own special way. Meanwhile, in 1080P you can clearly distinguish between each material on Sackboy and his pals making everything stand-out and pop just like they are actually in front of you.

While playing through LBP3, I did encounter some nasty bugs and glitches in numerous areas of the game that included falling through the floor, character models going whack, not being able to progress through Adventure mode, game crashing, and even corrupting my save file. I definitely can’t say I was happy with them, but the amount of laughs and fun I had in the span of my playtime versus the frustration is incomparable.

Sumo Digital has done a great job on LBP3 by bringing back the old in addition to their new content. Meanwhile, some small details and charm are missing that fans of the series might pick up on. The numerous bugs and glitches were not pleasant at all and quite evident, but I am confident future updates will eliminate the issues.  Presentation of the story isn’t the best the series has done, but instead lies in the hands of the community with their creations. Regardless, they’ve made the endless amount of fun and creativity even more endless. The laughs and feelings of awe that LBP3 will cause are inescapable and honestly, is something you don’t want to escape.

Next Super Smash Bros. Review – Do You Even Smash Bro?
Previous Defenders of Time Review – Another Tower Defence Game, But It’s Addictive and Pretty