Lamplight City, the new game by Grundislav Games, takes place in a steampunk world where steam and mechanical aids are what propels the Industrial Revolution. This mystery point-and-click adventure story delights in the world it’s created and promised from its trailer a challenging story, attractive art, and a deep world to get lost in.

Detectives Bill Leger and Miles Fordham are investigating a flower shop burglary in the city of New Bretagne when things go wrong, someone gets shot, and now Miles has the voice of a disembodied spirit nagging him at all hours, wreaking havoc with his personal life and compelling him to quit the force and take to a soporific as a sleeping aid. Miles is still getting cases through a contact at the police station, and so he’s solving cases as a private investigator, while the voice in his head thinks he should get back to the original case of the flower shop burglary. That’s pretty much the plot. Oh, but wait—there’s also a main subplot of oppression and how different groups deal with it, and how machines are replacing unskilled labor and what that does to the blue collar workers in New Bretagne. 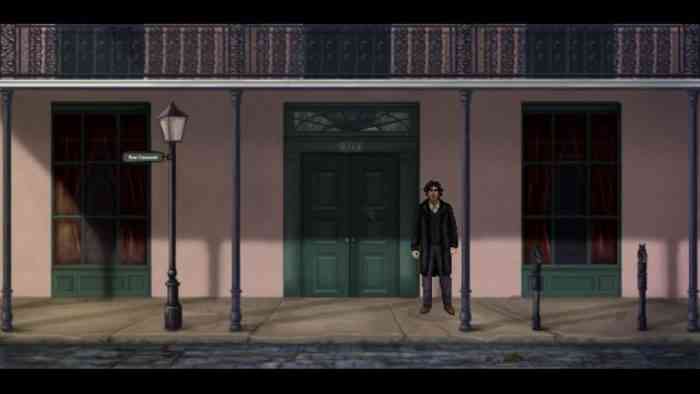 I’ll be honest, Lamplight City is a pretty cool game. You explore the steampunk, Victorian-era world around you as you solve cases, and the world they’ve built is fascinating to explore, especially because you’re Miles, a white man in an interracial marriage who’s deeply invested in the social progress of the city he lives in. Some of the world-building does fall flat after a basic examination, though. For example, New Bretagne is clearly designed to be Victorian England with some nods to New York, but Britain and France are both clearly referenced, and there’s a supporting character with a French accent. New Bretagne is on a separate continent called Vespuccia (I believe), but there’s…still Europe?

While I thoroughly enjoyed the portions of the game that tackled homophobia, racism, and classism, I think the game would have done better to have set the game in a steampunk version of the real world, as I didn’t know what the cultural and social context of this game was. If you want me to think your game has original world-building, you gotta put some work into making the world a little more than a reskin of Victorian England/Gilded Age New York, and Lamplight City never fully came into its own.

I was willing to overlook this in favor of the story, though. One of the absolute coolest things about this detective game? Lamplight City lets you make the wrong decision. I finished the first case wondering if I had made the right choice in my suspect, and by the third I knew I had, because your choices early on can make a major difference in the cases you solve later in the game. This was both a blessing and a curse: while I appreciate the realism and think it added to the game, the mistake I made early on made it impossible to find the truth in my third case, and one blunder at the door of an opium den forced me to declare another case unsolvable. The game could use a little more leniency, or at least a little more flexibility in what happens other than forcing you to just give up the ghost and abandon the case. I did have some varying difficulty with the controls, as well—sometimes the items I needed to click on were so small that, even after I’d triple-checked the whole map, I was stuck because I just didn’t see that corner of a bookmark in a book that had different dialogue for when I clicked on it separately. If I could hit tab (or any other button) and highlight all the interactive items in a room, that would easily solve the entire problem.

One of the elements that made Lamplight City so fun was the fully voiced, interactive characters, many of whom were impressive and memorable the way old British detective dramas are, where the priority is the story. Just because said character’s only going to be around for one case doesn’t mean they shouldn’t get the full development of a main character, and Lamplight City brought that in spades. It was satisfying when some earlier characters had late-game cameos, and the main cast of characters themselves did a great job of carrying the story, even if there were a few hit-and-miss voice performances throughout. I felt similarly about the art—usually it was great, sometimes it was unsettling, but I almost always had a good sense of who the person was. The graphics are basic, with sprites and art dominating conversations between characters, but I got used to it pretty fast and it didn’t bother me as I explored Lamplight City.

Lamplight City is the rare detective game where the mysteries are challenging to solve and satisfying to do so. While the world-building often doesn’t stand up if you peel back the initial layers and there are frustrating elements to the way cases stack against each other, I thoroughly enjoyed exploring the world of New Bretagne and the mysteries inside of it. The game handled sensitive topics with real care and integrated them seamlessly into the story of Miles Fordham. I’ll probably hop back into it with a second playthrough in an attempt to redeem myself after putting innocent people in prison and, of course, for the less moral reason of wanting to know the truth of the matter. What more can you ask for from a detective game?

When The Past Around Review – Cozy and Compelling