It is often said that imitation is the sincerest form of flattery. What isn’t said quite so often is that the imitator proved to be better than the original. There’s no question that LA Cops took much of its inspiration from the wildly popular Hotline Miami. A top down, isometric twin stick shooter it has all the trappings that made Hotline Miami popular but none if its charm (hrmm, that might be the wrong word to describe Hotline) and despite wearing that inspiration on its sleeve falls remarkably flat.

Set in the era of buddy cop TV shows and perfectly acceptable sexism LA Cops admittedly has all the style of the 70’s down but none of the humour that made Starsky and Hutch worth watching. That doesn’t mean it doesn’t have jokes but the sad fact is none of them are very funny. I chuckled here and there, and I’ll give developer Modern Dream credit for really sticking to the 70’s cop tropes, but the overtly sexist ‘women belong in the kitchen’ attitude was played then and is even more played now. Any semblance of story in the game is told through short cut scenes but any relationship established between characters starts and finishes in each one and never gives you a reason to pair anyone up specifically.

At the beginning of each level you choose two ‘buddy cops’ from six playable characters but apart from filling the race/sex quota none of them stand out from each other when it comes to playability. Chet Kowalski is your bad ass with a short fuse, Jo Murphy as the lady who smiles her way through the constant insults (well she’d smile if she had a face), Borland the token Samuel L. Jackson (his is the wallet that says BAD MOTHERFUCKER) and so on and so forth with the remaining officers all filling a required trope. Of course they’re all overseen by the tough talking Chief Mahoney who all but hates every officer under his command. Once you pick your pair you get one of the aforementioned cut scenes of mostly forgettable dialogue and you’re off to catch some perps. 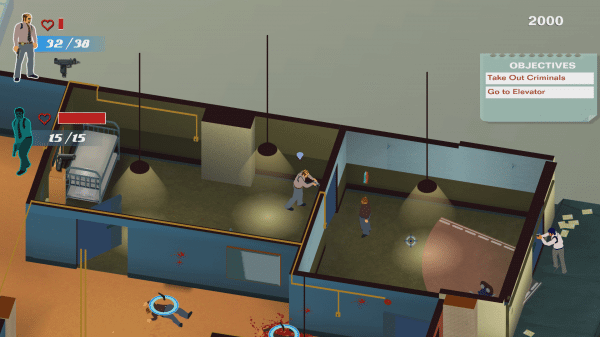 The game itself consists of eight levels (with replayability provided by increasing the difficulty) and a few bonus levels. Each level essentially plays out the same by having you navigate through an environment to complete an objective. Differences from one level to the next are nothing more than a larger environment with higher numbers of enemies to mow through. You’ll start outside a building and have to work your way through said building either arresting or shooting the bad guys as you go. Cuffing the bad guys will get you more points at the end of the level but ‘shoot to kill’ is almost always the easier option. By ordering your AI partner to move to specific places or bust in through opposite doors you can try to ambush enemies in tandem but that rarely ever works like you planned it to. Trying to work with your partner is the equivalent of playing Trivial Pursuit with a toddler… impossible. I found that I often left my partner where he stood so when I died charging the enemy I could count on him as a second life. With any luck I’d be able to grab a first aid kit, revive my former self and continue on my merry way.

The difficulty also spiked due to poor level design and unpredictable enemy patterns that proved to be infuriating at times. Even though you have the ability to turn the camera to see your environment at different angles you quite often can’t see far enough ahead of yourself to know if you’re walking into an ambush or not. At times when you see a solo gunman patrolling a room you can pop in and take him out without trouble yet at other times, with the same gunman in the same room, that single shot will draw six or seven murderous sons of bitches to descend upon you from out of nowhere. Of course if you could count on your AI partner to help you out it might be a bit better but as I mentioned above it’s more likely that he’ll charge in just to get taken out before even drawing his weapon. Even more questioning to me is the inability to have a friend take over said AI character in some co-op fun which is strangely absent from the game. 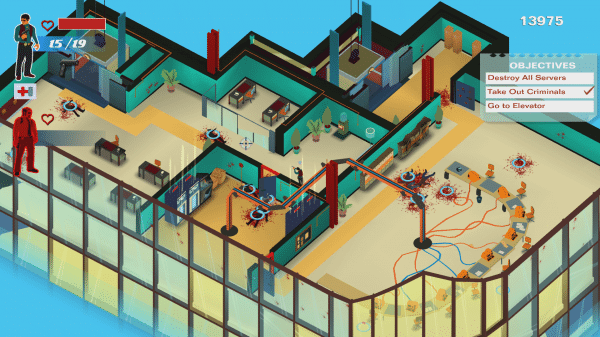 At the end of the level you’ll get a breakdown of your attempt and be assigned a score based on how well you did. Apart from leaderboards there isn’t much more to it than that. You’ll also get experience points that you can assign to a cop of your choice but it’ll take forever for these experience points to add up to much. You’ll have to play levels over and over and over for there to be any impact in your cop’s abilities to survive the ridiculous situations he’s placed in. I’m no Nostradamus but I don’t see many people lasting that long into the game.

The one thing that LA Cops does have going for it is the unique minimalist presentation. It takes a bit to get used to the faceless characters (and their atrocious voice acting) but I genuinely enjoyed the art style. If anything it was a refreshing change from the usual 8-bit/16-bit styling that a lot of these indie games are known for these days. It’s not enough to save the game from how much the rest of it sucks but it’s a bright light in an otherwise dreary offering.

If you have $15 burning a hole in your pocket there are plenty of better ways to spend it than wasting it on LA Cops. You might dig the groovy aesthetic for a short while but inevitably you’ll walk away either bored or frustrated. Maybe just keep in mind you can get the original Hotline Miami for even less and have a lot more fun.

*** Reviewed on Xbox One, code provided by publisher ***