Kirby and the Rainbow Curse Review – Strung Along on Another Adventure

It’s become abundantly clear over recent years that Nintendo isn’t afraid to experiment with how we play Kirby games. Many entries in previous years have flipped tradition, done away with typical platforming, and given us something new entirely. The newest game in its line is Kirby and the Rainbow Curse. Instead of running, jumping, and stealing powers as you normally would with Kirby, you instead roll along colorful rainbow lines drawn on the gamepad. This game echoes many features seen in Kirby’s Canvas Curse back on DS, only now in HD on your home console.

Kirby sits stationary until you draw a line in front of him, which will send him rolling along in the direction you drew. Kirby will latch onto the line and follow along it in any direction, only falling off if he hits the end. Many lines can be drawn on screen at a time to manipulate Kirby’s movement, but you’ll also have to be careful! In the upper left side of your screen there is a sort of “Ink meter” which will deplete as you draw. It refills over time, but can run out very quickly if you aren’t careful. As Kirby rolls, you can draw loop-de-loops to have Kirby speed up, or tap him to dash attack into enemies. Throughout every level you will find stars to be picked up. Picking up one-hundred of these will power Kirby up granting him use of something called “Star Dash”. Star Dash is a powerful strike that plows through stone blocks and enemies alike. 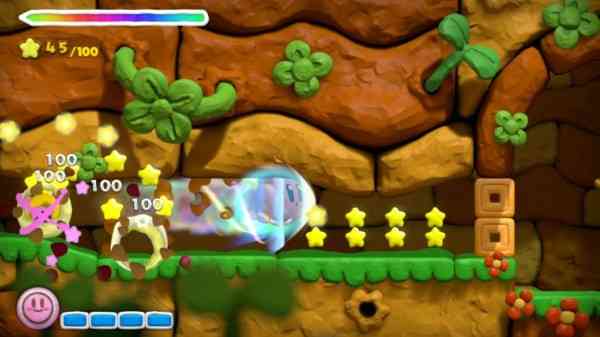 As fun as it is, Rainbow Curse isn’t exactly all….well…rainbows. It’s best to describe as a game that’s easy to learn, but hard to master. What Rainbow Curse gains in creativity, it lacks in precision. The line drawing mechanic is fun, but is a little clunky and can lead to a lot of mistakes. Many times I missed collectables in levels because Kirby latched onto the wrong line, or I ran out of Ink. All of this can be cured by what I’m sure is simple practice, but as somebody who absolutely loves his platformers, this game just seems to fall flat. Gameplay doesn’t ever get deeper than what is offered right from the start, so I never felt a desire to really improve my game, or in some cases even go back to playing it. In some ways, it’s good that this title is a bit shorter than other Kirby titles. If it were any longer, I would surely have gotten bored before the end.

Kirby and the Rainbow Curse is now the fourth WiiU title with Amiibo functionality. Unlike Super Smash Bros. or Hyrule Warriors, the Amiibo that can be used in game are limited; but it’s unsurprising who can be used. Amiibo for Kirby, King Dedede, and Meta Knight can all be used in game and each provide a different benefit. When the Kirby Amiibo is tapped onto your gamepad it grants you unlimited use of your Star Dash power. King Dedede’s Amiibo provides Kirby with additional health and a rocking hat. Personally I found this power up to be particularly helpful during boss encounters. And lastly, Meta Knight’s Amiibo allows Kirby to strike with greater power when using his standard dash attacks. You’ll also get to wear Meta Knight’s mask which is a reward unto itself. That guy is pretty bad-ass. It should be noted that each Amiibo can only be used once per day, and that its power only lasts until you either beat the level or die. Unlimited use of these powers would quickly make the game too easy.

Aside from its relatively short story mode, Rainbow Curse also offers a challenge mode. These challenges have you solve a string of four short puzzles each with a ten second timer. The goal of each puzzle is to collect the treasure, totaling at four chests per challenge. These challenges, while relatively simple in design, get very challenging very fast and require a certain level of mastery when it comes to manipulating Kirby and his rainbow lines. Treasure is actually a pretty big part of Rainbow Curse. While the treasure chests in challenge mode are strictly “decorative”, the ones you pick up during your adventure unlock cool collectables such as trophies and music. Trophies can be viewed in a gallery, each one with its own name and description. 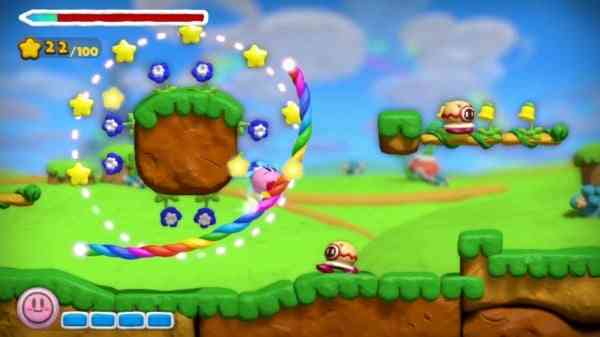 New controls aren’t the only thing that Nintendo is creative with when it comes to our adorable pink friend. Kirby and the Rainbow Curse has a fresh new take on Kirby’s visuals, this time taking him into a world made entirely of clay. New art styles work really well for Kirby because his design is so simple. Before having played Rainbow Curse I was pretty apprehensive about how it would turn out. I said the same thing before playing Epic Yarn too, and I was wrong both times. HAL has done an incredible job of actually making you feel like you are watching a world of clay unfold before your eyes, and Kirby bounces, squishes, and moves as if he was made of the stuff too. Unfortunately due to the nature of the game, you’ll mostly be unable to enjoy Rainbow Curse on your TV. It seems a shame that so much hard work went into making the game look great, only to have the player locked onto the gamepad, which despite its virtues doesn’t look nearly as good. Second through fourth players will get to watch the big screen though…silver linings right?

Since Kirby’s debut into the video game world back on the NES, once thing has remained as a constant; it’s surprisingly rocking music. Many, if not all, Kirby games have an array of both cheerful and heavy rock style music which has always worked really well to both compliment and contrast the games bright and cutesy appearance. As is the pattern with all of predecessors, Rainbow Curse starts itself off with happier, brighter music and quickly escalates into more serious (yet equally catchy) music by the time you make it to the first boss. The game also features a music studio alongside its other collectables. This studio has music from literally every past Kirby title, including the ever toe-tapping theme for King Dedede.

Charming is probably the best word to describe Kirby and the Rainbow Curse. It’s cute, and fun for what it is, but is nowhere near the best Kirby title. This is the sort of game that I would play between other games when I need a change of pace. It’s hard to argue that it wasn’t designed that way though. At a retail price of $45, Nintendo knew that this was a shorter game intended to fill out the WiiU’s roster. It certainly isn’t awful, but what strengths it does have only really appeal to the Kirby faithful, or less serious gamers.

***This game was, of course, reviewed on the Wii U with a code suppled by the publisher***

Next Republique Remastered Review – The Game Watch Dogs Could Have Been
Previous Decay: The Mare Review – It’s No Slenderman But You’ll Still Streak Your Shorts