Developed by Press Play and best known for their hit Max: The Curse of The Brotherhood, Kalimba quietly made an appearance on the Xbox One store on December 17th without much fanfare. Previously known as Project Totem, this puzzle platformer game offers players a fresh new take on the traditional platformer. With head scratching puzzles to solve, twitchy and challenging gameplay, and a difficulty level that rivals some of the best in the genre, Kalimba will initially be discouraging but it is a game that should definitely have your attention.

The holy shaman of the island of Kalimba is overcome by an evil spirit, who destroys the islands sacred totem into pieces. In order to bring peace to her island, she needs to rebuild it, by possessing totem pieces and leading them through a harrowing journey across 24-stages and 3 different worlds.

In the single player campaign, you control two different coloured pieces of the totem, and play through a series of rather standard platforming stages, filled with moving platforms, pits of black lava, trampolines, etc. The levels and backgrounds are nothing spectacular but how you traverse through these levels is what makes Kalimba so incredibly fun to play. The two totem pieces are controlled by the same input, and the same analog stick, meaning that they move and jump at the very same time. Think of the cherry power ups in Super Mario 3D World, and you’ll get the idea. The totems usually follow a separate path, and you’ll need to move both pieces over different obstacles. It can be very challenging as you need to move strategically so that one of the pieces doesn’t fall to an untimely death.

The totems can also stack on top of each other giving the player access to some otherwise unreachable areas in the level. There is a heavy emphasis on the double jump, as you reach collectibles and platforms at great heights. As the game progresses, one of the totem pieces with the help of special power ups has an anti-gravity ability leading to some of the most ridiculously challenging moments in the game. I thought this particular mechanic was used a bit too often, even in boss battles and it grew extremely tiresome at some points.

Add to the mix of deftly maneuvering two totem pieces over separate paths are colourful hazards scattered throughout the level, and only the totem piece matching that colour can pass through. Walking or jumping through the wrong colour will mean certain death to the totem piece. Kalimba also features a swapping mechanic. A quick hit of the X button switches a totems position. This is necessary as quite often in the midst of falling, jumping, or walking through the colour you need hit X so the totem stacked on top of you isn’t harmed. 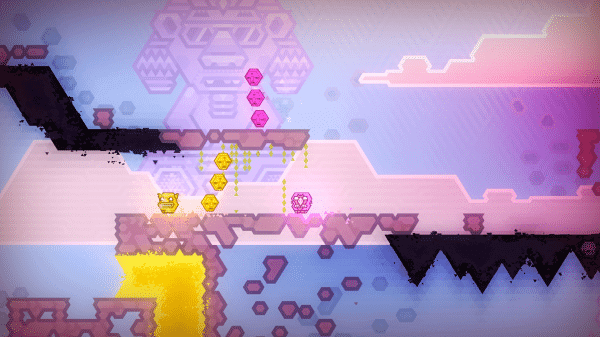 Kalimba is one of the most challenging platformers I’ve played in sometime, growing increasingly difficult as the totem pole rises. Using all of these mechanics to reach the end of the level is very puzzling, and will no doubt leave your head spinning, but it’s extremely rewarding once you figure it out. There are 70 gems found within each level, and collecting them all will award you with a shiny, elaborately detailed golden piece to add to the totem pole. That is, if you have little to no deaths, a feat that is sometimes nearly impossible. Completing the level with numerous deaths will result in losing those treasured gems, leaving the player with a dull, uncarved wood log. This, along with hidden challenge levels, friend leaderboards offer much replay value, because really, seeing an awful looking piece of wood in the middle of your beautiful totem is enough to bring you back to play the level again.

The 2D graphics are simple yet beautiful, filled with bold and bright colours and ancient tribal imagery, and seemingly everything is made up of triangles. The totems themselves are quite detailed, and the panicked look on their face when in peril is one of my favourite parts of the game. The soundtrack, while rather unforgettable, was charming and upbeat, and well suited for the game..

At first, I questioned why there was no online multiplayer, but after playing just one round alongside my partner, I could easily see why. Local co-op is the only way multiplayer could possibly work with Kalimba. With a fair bit of teamwork and communication involved, there is no way this game you could play this game with a stranger. With levels created specifically for co-op, it’s much of the same gameplay, and you’ll encounter many of the same type of puzzles and obstacles, except there are now four totem pieces to control, two for you and two for your partner. Instead of the double jump, you’ll now have access to the quadruple jump, which as you can imagine, leads to some incredibly frustrating moments as you have to time things just right! I advise to play with someone you love at your own risk! Your friends, family, significant other will get to bear witness to your controller throwing rage as you repeatedly find yourself inadvertently jumping into a pit when you thought your partner was going to jump at the same time as you. I may or may not have come close to breaking up with my boyfriend after a couple rounds of co-op. While EXTREMELY frustrating, it was also quite fun, and despite dying repeatedly, our errors were almost always followed by fits of laughter (and a whole lot of swearing!)

If you’re looking for a difficult yet incredibly fun platformer, look no further. While some of the game mechanics will leave you somewhat weary, overcoming the puzzles is very rewarding, especially when doing so with a friend. Kalimba offers a fresh new take on the traditional platformer, one that will cause both fits of rage and laughter. Priced at a mere $9.99, Kalimba is an experience that should not be missed.

Next JUJU Review – A ‘Mario-Donkey Kong-Sonic’ Clone That’s Fun but Fails to Stand Out
Previous The Witcher Adventure Game Review – Digital or Board Game Version, This is a Great Game