JackQuest: The Tale of the Sword Review

There are games that are fun and exciting, be it gameplay, story or some sort of interesting mechanic to keep you engaged throughout its run. Then there are those games that, for whatever reason, just fail to sink its hooks into players. Usually one can point to a few key areas that aren’t up to snuff that kill the enjoyment. Occasionally, though, it’s not any one thing that’s particularly bad, but rather a lack of anything to pull you in. Unfortunately, JackQuest: The Tale of the Sword is one such game that while technically proficient, offers little in terms of keeping players interested.

Let’s start with the story. The main character Jack goes for a walk in the woods with his love Nara. While out on their jaunt, she is kidnapped by the orc Korg…cue Jack leaping into an underground chamber to rescue her. While this might not be the most enthralling story in gaming, it’s perfectly fine for an action platformer.

The sort of okay-ness of the story permeates into just about every other area of the game as well, though. As a mix of action platforming and a maze, the game world is okay, but not very interesting. It’s also not very long of a journey either. Being pretty leisurely in my approach I was still able to finish in about two hours. Now, if one was in a hurry and had made at least one run before I don’t see any reason why the game couldn’t be completed in thirty minutes. It should be noted though, that even though it took me two hours the first time through I found it extremely difficult to stay engaged with the game for more than twenty minutes at a time. There just isn’t anything remarkable about it to turn things into a “must keep playing” affair. In other words, there is no hook. 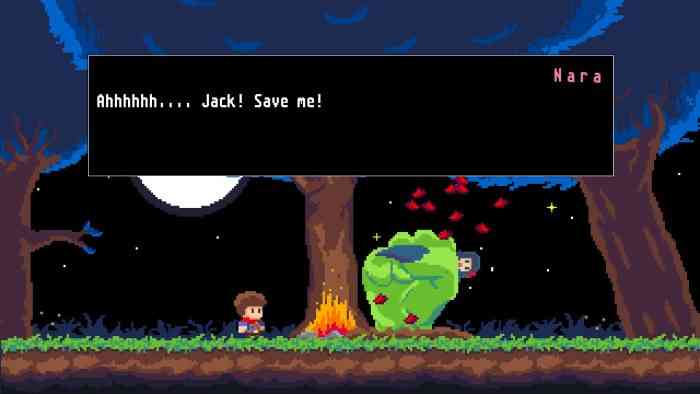 Even the combat is ho hum. Sure, you use a giant sword, but you do so in about the most mundane way possible. What about the exploration aspect? Again, eh. Look, it’s fine, but it’s not an attention grabber either. It’s so non-attention grabbing that apparently, I finished the game without even finding two major items. There is the sword, which isn’t optional, along with the double jump and being able to hold one’s breath underwater without drowning. There is also some sort of dash and a bow. If I did have the bow and I think I might have, it was never explained how to change the weapon. Since I was able to manage just fine without the dash, I can’t image that it was entirely worth seeking out either.

There really isn’t a whole lot here to dissect. On the plus side, the game does look quite good. The negative, besides the brevity, is one that I couldn’t quite pin down the main culprit. The main character seems to have a lot of weight to him and as such controlling falls and landings can be a little dicier than they need to be. Not sure if it’s some inertia built-in or a little bit of play in the controls, but personally I would prefer much more exact control over the character in this type of game.

To wrap up, there just isn’t a whole lot to say here other than it’s all just a little meh. Sure, there are some big giant bosses to battle here and there, but they certainly aren’t challenging. There are relatively few things that are firmly something I dislike. By the same token, however, there isn’t really anything that stands out to me as something I really enjoyed about it. While JackQuest may be technically proficient it just doesn’t really move the needle in any one direction. It’s the gaming equivalent of what you had for breakfast last Tuesday. You’re pretty sure you ate something, but you certainly don’t remember what it was.