Doom VFR Review – A Trip to Hell Worth Taking

Growing up I never played many first-person shooters but I had an idea of what they involved: over-the-top gore and non-stop action. Realism could take a hike; FPS titles were about blowing everything up and coming out unscathed. When I entered the world of the FPS, I thought I must have been wrong. Call of Duty is slow and methodical, realistic, sometimes to a fault. Battlefield is much the same. And the true focus of these games is on multiplayer, something I’m not crazy about. Then Doom VFR came along and showed me my initial instinct wasn’t wrong, per se. It was just a bit misguided. There are first-person shooters, and then there is Doom. Doom VFR is a loving VR homage to old-school Doom, emphasizing fast movement and bigger and badder guns. It’s loud, it’s intense, and it’s over far too soon. But while it’s here, it leaves quite an impression.

Doom VFR takes place shortly after last year’s Doom reboot. You play as Dr. Peters, the last survivor of the demon outbreak, though you don’t survive for long. In a preview of the game’s not-so-subtle mentality, you are ripped to shreds by a demon in the opening scene. You awake to find your consciousness transferred to a cybernetic body. Soon you realize your only option is to close a portal to Hell, and you do that by fetching various components to fix different pieces of equipment. Then you succeed and the game is over, accompanied by an ending that wouldn’t have looked out of place in a classic NES game. Look, there’s not much of a story here. It doesn’t matter. The story is a means to an end, an excuse to move from one demon-slaying arena to the next.

Of course, movement is the one area that will take a little getting used to. You have several control options on PlayStation VR. There’s the trusty DualShock 4, as well as a pair of PlayStation Move controllers. There’s a third option, too, for players lucky enough to snag a PSVR Aim controller (which simulates rifle with conveniently placed joysticks). I am not one of those lucky players, so I can’t comment on how it handles.

“Doom VFR is a fantastic translation of the Doom series to virtual reality.”

Each control scheme comes with its advantages and disadvantages. Before you play, think about what sort of experience you want to have. If you can’t handle full, free movement in a VR game, the Move controllers will serve you well. The left Move controller’s trigger allows you to teleport around the world, and in a pinch, you can make short, quick dashes in one of four directions. This isn’t easy to pull off. The buttons on the Move controllers are laid out in a square, not a diamond like on the DualShock, meaning you’ll forever struggle to remember which button dashes forward and which dashes right. If you have the stomach for it, you can’t beat the DualShock 4 with full motion turned on. You aim with your head, and the downside here is that your guns appear to be attached to your face, moving in a really unnatural way that can be distracting at first. You’ll get over it quickly. You’ll still have access to teleportation and quick dashing, but with the addition of free movement and strafing. In a game as fast-paced as Doom VFR, the more you move, the better your chances for survival.

Running alone won’t keep you alive, though. Fortunately, Doom VFR provides you with a decent selection of powerful guns. You start out equipped with a pistol sporting infinite ammo, so you’re never left in a lurch, but you’ll want to switch to almost anything else ASAP. Shotguns, assault rifles, and grenade launchers each handle uniquely and have their own upgradable secondary fire method, which can be unlocked at various weapon upgrade stations. Likewise, you power up your own character by finding character upgrade stations — you can increase your health, weapon capacity, and the duration that time slows down as you set up a teleport move. 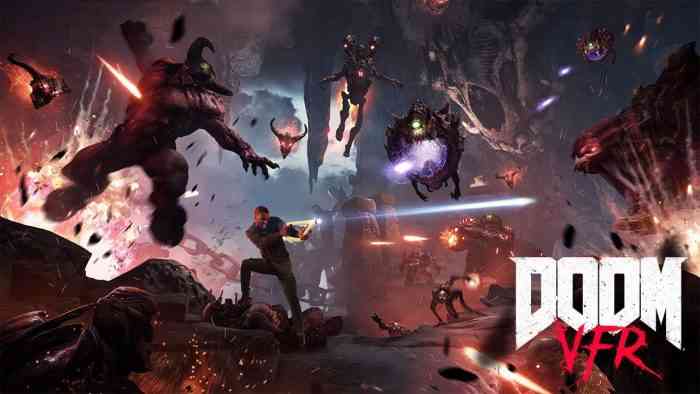 Speaking of teleporting; wear an enemy down enough with raw firepower and they’ll begin to flash. This is your cue to teleport into them, leading to Doom VFR’s version of the glory kill, the telefrag. This move isn’t nearly as over-the-top as Doom’s melee dispatches, but demons do explode in a satisfying spray of gore and guts. Plus, telefragging gets you more health pickups, so it’s worth making the effort. The game did occasionally freak out on me when I attempted to telefrag, dropping me either in front of or behind the enemy when I was clearly aiming right at it, which is a minor frustration, but nothing game-breaking.

I never got the sense that any particular weapon was best-suited for use against any particular demon (though of course the Gauss Cannon and the grenade launcher turn most things to goop in one or two shots). I usually let the game choose my weapon for me — when you run out of ammo, it switches you to another gun automatically, preventing any lull in the action. There’s no reloading here, either. Id seems to really want to emphasize the non-stop action.

“The story is a means to an end, an excuse to move from one demon-slaying arena to the next.”

Well, non-stop to a point, at least. There are a handful of instances where the action grinds to a halt for a mini-game, usually involving hacking a computer terminal. These mini-games are fine. They are easy. They are boring. I’m not entirely sure why they exist, except as a way to slow the action down, which is the complete antithesis of the game’s reason for being.

Likewise, the environments are a bit on the dull side, but exploring the station on Mars and the depths of Hell in VR turns what would otherwise be a fairly rote trek through stereotypical environments into something more. That’s the power of VR. It gives a weight, a sense of reality, to every locale. The PSVR can’t render graphics at the level of detail a souped-up gaming rig could, but the game still looks pretty good. You’ll get up close and personal with a lot of different demons, get a face-full of their ooze and blood, glimpse their glistening skin, stare into their terrifying open maws. It’s very raw, thrilling. The music does its part to match the aesthetic, blaring out appropriately hardcore rock and synth tracks.

Doom VFR is a fantastic translation of the Doom series to virtual reality. Yes, it’s a bit on the short side — I finished in about three hours — but the fun of leaping around arenas pursued by horrific demons makes it worth revisiting. If this game had told a compelling story, it would rank pretty high on my list of the best games of 2017, but the lackluster tale left me feeling let down. Still, if you know what you’re in for, it’s a bloody good time. 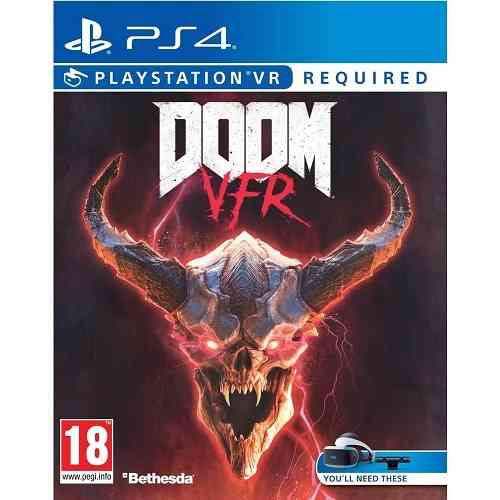