Green Hell VR demonstrates a new category of VR gaming outside of horror, racing, and walking simulators. One genre that has surprised me as a good one for VR is the survival game.

Pancake (meaning non-VR) versions of that genre focus on the minutiae of crafting as the main hook. VR ups the immersion ante, as it brings immediacy to the environment of survival games. Especially when said environment is hostile. In Green Hell, ‘hostility’ means a terrifying Amazonian Rainforest.

Depicting realistic vegetation in a game, be it pancake or VR, remains a big technical and hardware challenge. It takes a beefy gaming PC with a top-end video card and lots of RAM to do so. Players of the fifteen-year-old Crysis game know how much that game still pushes modern-day PCs. So the demand on PCs is even higher when it comes to VR games. To bring the game to the wireless Meta 2 headset required some sacrifices.

Mostly, the translation by Incuvo S.A. taking over for the PC developer, Creepy Jar, is successful. While they scaled back on textures, lighting, and shadows, the scale, oppressiveness, and the danger of the PC version is all there.

Green Hell incorporates several gameplay mechanics to deepen the survival experience. The requisite survival mechanics are there: crafting, energy, and health. Added to that are a story mode and a sanity factor. Both add to the tension and give an endgame beyond just trying to survive as long as you can.

On the survival level, they strand you in a rainforest – where you must focus on searching for food, water, and shelter. You need to learn how to gather materials for building fires and shelter. Once you’ve mastered these basic skills, you can venture further out in search of a way to escape the rainforest. 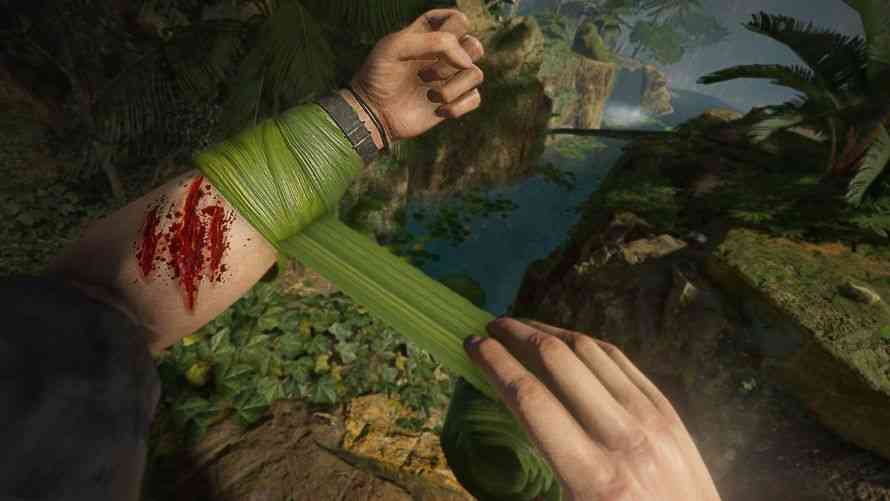 Of course, the environment is not friendly, and danger comes in many forms. Not only will you have to fight off the expected predators, such as leopards, jaguars, and rattlesnakes, but you have to worry about drinking unclean river water. If the top of the food chain predators don’t get you, infections or disease could.

Another immersion benefit from playing in VR is the level of physical exertion involved. You have to mimic the actions of chopping wood, banging rocks together to make weapons, and constructing shelters. Taken singly, none of them are difficult, but as a collective, all these actions drain you. Even moving through the rainforest hacking through foliage proves to be tiring and a little frustrating. Just like it would in a real-world situation.

Welcome to the Jungle

Dense environments are a boon for 3D audio positioning too. You will hear the cries, roars, chirps, rustle of foliage, and the gurgling of water all around you. The sudden stirring of creatures or the crashing sounds of something moving through the foliage put your head on a swivel. Of course, being in a rainforest, the sound of rain falling and dripping around you is also very immersive.

The game offers the expected suite of VR options and you can choose to walk or teleport. For inventory, the game has adopted the backpack approach used by other VR games such as Saints and Sinners. This makes handling and storing inventory items very intuitive. Another borrowed element is the notebook. It contains tips and quest items and a map of the area. You also have a smartwatch that keeps track of your vitals. 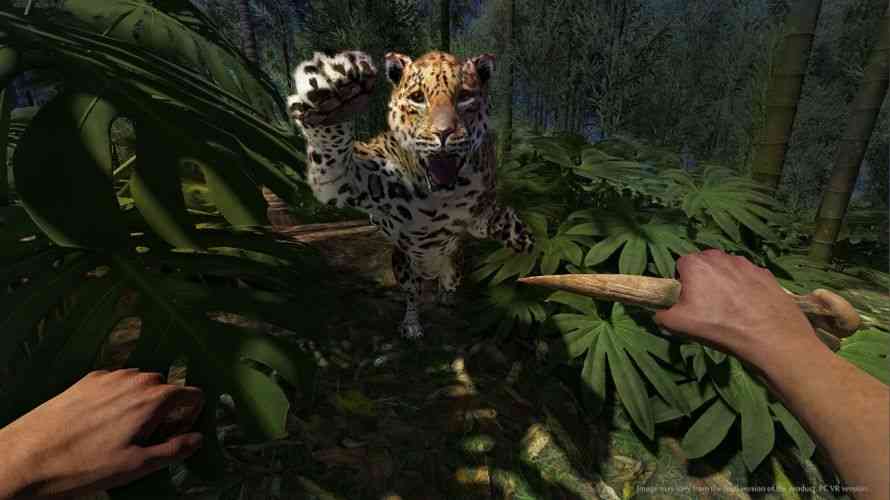 Weapons handling, be it spears or axes or knives, also feels good. Each has a proper sense of weight and inertia. You will have to apply the proper force to throw a spear or swing an axe to chop wood. The graphics and physics are excellent. This includes the wrapping of bandages to handle wounds or pulling leeches off of you. The swimming mechanic is solid too, as you use your hands to stroke through the water.

For those that prefer a story-driven game, this is also available. In it, you and your wife, Mia, become separated. You play Jake, an anthropologist who must find Mia and a way to escape. For those of you who don’t want to be stressed out by the survival aspects of the game, fear not. There is also a tourist mode. As the name implies, this mode turns off all the nitty gritty aspects of the game and you can just stroll around and soak in the environment.

In Danger There Lies Beauty

No matter what mode you play the game in, there is a real joy in just soaking in the environment. You can watch colorful butterflies flitting around, take in gorgeous sunrises and sunsets, watch the rushing water of a waterfall, pick up beautiful flowers, or pick up small colorful frogs. As with most dangerous environments, there is a lot of beauty to take in as well.

Overall, this is a solid VR survival game that only suffers in a few areas because of the technical limitations of the headset. There are only a few annoyances, the main one being the character constantly moaning about being thirsty or tired or hungry. You end up being more motivated to address the issue just to shut the character up. It’s a small thing, but small things have a way of growing into something bigger.

VR Rainforest is Worth Experiencing

If you are into survival games, then Green Hell VR is definitely worth your time. Nature lovers will also find something in this game to experience and enjoy.