GORN Review – Kill or Be Killed In This Brutal Brawler

In order to fully enjoy GORN, you must leave your violence inhibition at the door. This is a VR fighter that allows you to punch heads into mush, lob off limbs, and kill in more ways than you can imagine. GORN will gross you out plenty, but also make you laugh a ton which is a testament to the strength of this laser-focused experience developers Free Lives have crafted. So grab a drink, stretch, pick up a weapon (or two), and be prepared to unleash your inner gladiator.

GORN wastes no time setting up a story or motivation for why you should participate in its bloody carnage fight. After all, as a gladiator, things aren’t exactly complicated – it is simply kill or be killed. Instead, it immediately drops you into a series of arena fights. These fights serve more as sandboxes of destruction, providing tools to experiment with and plenty of meatheads to conduct those experiments on. You start with a basic sword, which gets the job done and does exactly what you expect. The fun is in seeing what new weapons are available next. GORN lets you live out your wildest action movie fantasies with nun-chuks, throwing knives, and even retractable Wolverine claws – all of which can be duel-wielded. For a melee game, the variety is simply unmatched. My favorite is the lobster claws, capable of picking up enemies and tearing up them apart from limb to limb. Not all weapons are unique – there are half a dozen of two-handed weapons alone, which don’t vary much in terms of function – but the sheer number of options is glee-inducing.

Are You Not Entertained?

The first time a foe came crawling after me, having lost both his legs, I was horrified. Doubly so when I saw an eye-ball pop out of someone’s head. Enemy combatants will stop at nothing to take your life, even after suffering multiple dismemberments. If they lose the weapon hand, they’ll simply come after you with the other fist. This level of gore is arguably nauseating, but GORN is able to sidestep moral dilemmas with its black humour. Weapons look like they’re made out of inflatable plastic, sagging and bending upon contact. The enemies – roided-out hunks of muscle mass – mumble incoherently and prance around with arms flailing as if drunk. There are also plenty of wonky ragdoll physics too, with bodies soaring through the air if hit hard enough. You can’t help but giggle at the absurdity of it all, even when you’re holding some poor guy’s beating heart in hand. That being said, GORN’s physics can be hit-or-miss. 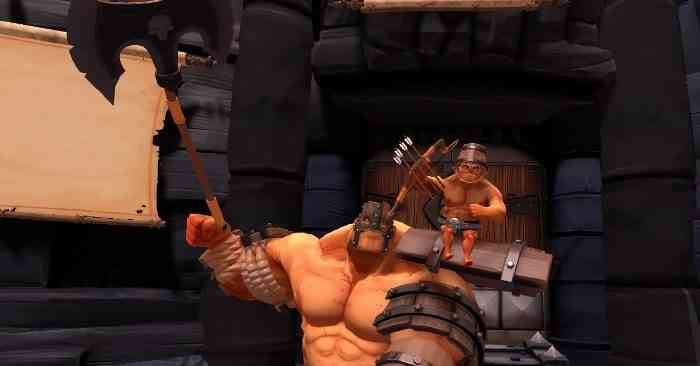 Sometimes what should be a killing blow ends up bouncing right off. An overhead slice with a greatsword may simply knock someone over, instead of bisecting them as you’d envision. Other times, a weak slash can take a head clean off. This inconsistency makes for serendipitous moments when things work out in your favour, but can also frustrate. Conversely, the same goes for damage inflicted to the player. I’ve shrugged off hits that I thought would surely end me, but I’ve also died from a single blow. The lack of health indicators makes it even more difficult to anticipate whether the next hit might kill you. Unfortunately, repetition does kick in. Little alters from level to level; you face more enemies and they have more armor. Once all the weapons are unlocked, there’s not much to do besides replay the same levels again. The unique boss fights are a welcomed change of pace, requiring you to stop and consider your approach for once, especially the giant crab, but these encounters are few. The bonus modes — local multiplayer and create-your-own-battle — slightly extend the fun, but aren’t memorable enough to hold attention for long.

It’s worth mentioning that the default locomotion scheme may not be for everyone. You move around by dragging the environment, which works well for a strategy game, but not for GORN’s fast-paced action. Such locomotion is too cumbersome to allow for quick dodges and repositioning. It’s even more awkward when you’re trying to move while holding a two-handed weapon – like paddling a canoe on land. Of all the VR games I’ve played, I have never felt motion sickness like I have with GORN. After the first two fights, I had to take the headset off and sit down. While it’s not made explicit in-game, GORN thankfully has smooth locomotion and snap-turning, both of which can be enabled in the options menu. 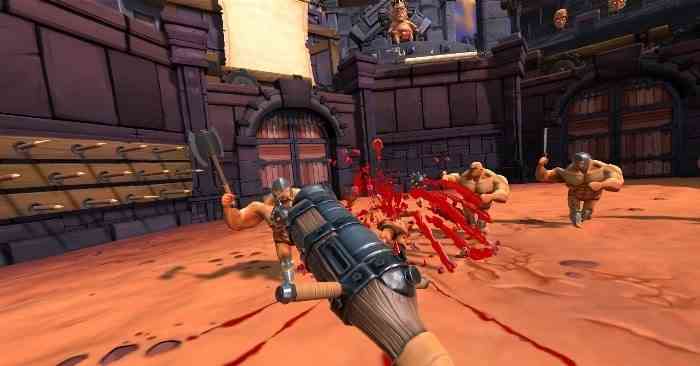 Every component of GORN, from the huge assortment of weaponry to the strange physics, comes together to deliver exactly what is promised: bloody, melee carnage. It’s a no-frills experience that doesn’t concern itself with anything extraneous, like moral questions or a narrative. For some, that’s more than enough. For others, GORN is at least worth checking out, if just to see first-hand how gross dislocated eyeballs are. It’s pretty gross. 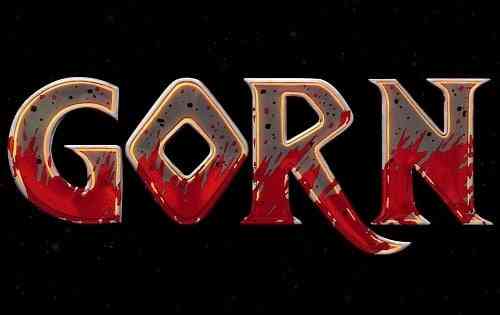 Warhammer Age of Sigmar: Tempestfall VR Review – Tempestfall Stuck In A Teapot?
Next Stranger Things 3: The Game Review – Leave This One in the Upside Down
Previous Horace Review – More Than Just Nostalgia