This brings us to our thumbless, tentacle-limbed hero, you, the offspring of Cthulhu. You are also an unpaid intern at Godly Corp, a move of classic pantheic nepotism that rivals the ancient Greeks. As the child of Papa Cthulhu, you are required to perform very important planet-maintaining tasks to ensure survival of one world or another while fighting off those who would try and destroy your work.  All of this is required while having only a tentacle. It could be worse, though. You could be playing as Azathoth’s nephew. Imagine having to do that when your whole body is a tube sock with teeth.

It Will Make You Smile

Throughout your tenure as Godly Corp’s newest acquisition, you are guided through a series of tasks by a computerized voice that taunts you throughout. The role of the voice is not unlike the taunts of GLADoS from the Portal Series. The voice is peppered with the same dry irony of its likely inspiration. The humor in the story is unexpectedly sharp. The paperwork you fill out for the position and the forms between levels are worth a read for some chuckle-worthy easter eggs.  Of course, Tentacles are never not funny, but the vocal jokes and visual gags are the right flavor of dry for the office-with-tentacles environment. There are some cute touches, like the framed photograph of Hide the Pain Harold on the desk and the clever “Employee of the Month” plaque with Cthulhu showcased. 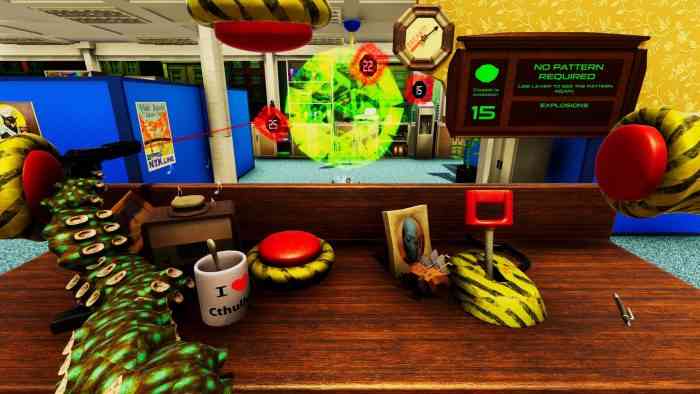 Godly Corp is only single-player at this time. It is comprised of 20 levels that can be played on three different levels of difficulty; easy, normal, and hard. The play is pretty standard for puzzle games in which you have to resolve the puzzle task within the time allotted and your score is based on a number of factors. Most of the time, in this series, the factors are number of times the task is completed, the accuracy of the tasks, and how many items are left on your desk when you are done.

Once you have successfully completed a level, regardless of score, you can go back and replay it to try and beat your personal best or to complete achievements. The game does have achievements. They are actually fun to try to aim for, which you can do very easily through multiple replays of any level you like at any time after you’ve unlocked them.

The puzzles seem like they would be easy enough. You have to manage the temperatures of a planet, control an infestation, or construct a planet from IKEA parts. All the while, you have to deal with some sort of distraction in the form of an invading species, the lack of gravity in outer space, or a monster to scare off, to name a few. The controls that manage the tentacle as it flops, twists, and is, well, flaccid are hard to manage and it takes a few times each level to really figure out what you’re doing.

Godly Corp is played mostly on the mouse to control the tentacle and the WASD key to, so fortunately, the controls themselves aren’t terribly complicated. A standard mouse with a scroll wheel does the job. Figuring out the right angle to use to wrap the tentacle around various devices like a joystick or a pump sprayer was hard to get used to. Eventually, though, I caught on and had an OK time straight up to Level 7 where I wanted to rip my soul from my body and feed it directly to the Great Old Ones.

The graphics remind me of my younger days, sitting in front of the TV and watching music videos from 80s and 90s. They are kind of choppy and weird and look a bit thrown together, which gave me a really bad first impression. As Godly Corp progresses, the actual design of the tentacle and its surroundings appeared intentionally offbeat and a bit of a throwback to cutthroat office environments of recent history. The graphics began to grow on me a bit, but I still wish they were a bit more sleek. It is nice that you can change the color of the Tentacle and customize your office palette a bit.

This Wasn’t In The Brochure

While this is nitpicky, the actual Icon for the game is pixelated and unreadable. Some of the presskit items look so stunning, but there is a bit of a disconnect between the brand of the promotional materials and the brand of the game itself. The banners and promo items across the web offer. What I do like about the actual promo banner is the fact that it uses Copperplate font, a font almost as egregious as comic sans, in a way that churns images of Cindy, the office admin, setting up the annual summer fundraiser. In a good way. 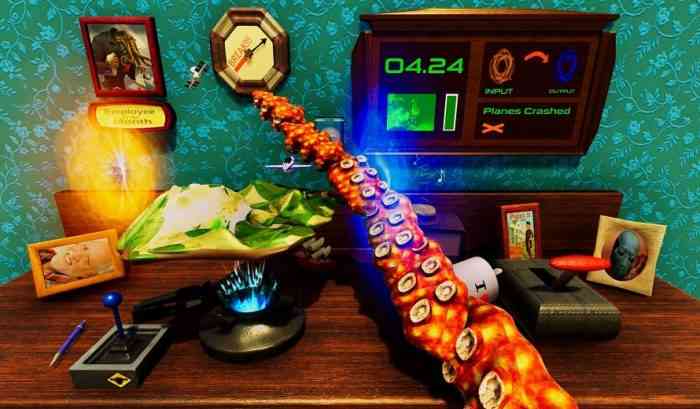 The music, though, is perfectly on-brand. The first impression, out of the box, on my screen, rapid music set the perfect tone of typical office-based entertainment. It brewed the feelings of a busy workday starting after that first rush of a caffeine high. Throughout your tenure at Godly Corp, you are offered up canned music that thematically works and a radio you can change the station on to provide news updates for Florida disaster weather and crooner sounds.

On its surface, and deep down, Godly Corp delivers exactly what you want. It’s a focused puzzle game that allows you to turn off your issues for a while and just bathe in satire directed toward H.P. Lovecraft. It reminds you of the torture of your office job and allows you to blow off some steam. While you type away at your work or talk away at your customers, it’s not hard to fantasize that you are a tentacle-adorned, nepotized, Cthulhu-spawn destroying eggs and roasting cities. If your desk job is destroying your soul, this game might be some solid therapy for you.

All in all, Godly Corp is weirdly compelling. As TR8 Torus Studios’ inaugural effort, it was difficult to step into it with any expectations, but maybe having none was the way to go. A few elements are surprisingly charming, and for those who are Lovecraft fans, they’ll find a fun, brief little home in this time-management puzzler. It isn’t the epic adventure into R’lyeh that we all want, but it’s certainly a fair and distracting peek.