When you dive into video games, you sometimes crave an experience that will make you really think. Something that challenges your ability to plan ahead and ask yourself: How will this move affect me later on? Like a chess match but with both players acting at the same time, real time strategy games are a delicate race to marshal forces, collect resources and position yourself before your opponent.  There have been many great examples of this in the past, ranging from Command and Conquer to the ever popular Starcraft series from Blizzard. Now there’s a new kid on the block called Gemini Wars, out now for Steam on PC. So does this new kid fit in? Or will he be outcasted from the get go.  Read on to find out.

After a brief cinematic explains how different factions of the human race are at war over planets and resources in space, you are presented with a few modes of play. I suggest beginning with the tutorials to learn how things work, because not all RTS games are the same. There are two tutorial modes, a regular and advanced mode. Normal mode gives you the basics of operating the game cameras, and how to build ships and bases that you will need later on. The advanced mode introduces jump gates and other skills that will come much later in the game. The tutorials are simple, to the point, and easy to understand – which is a plus. 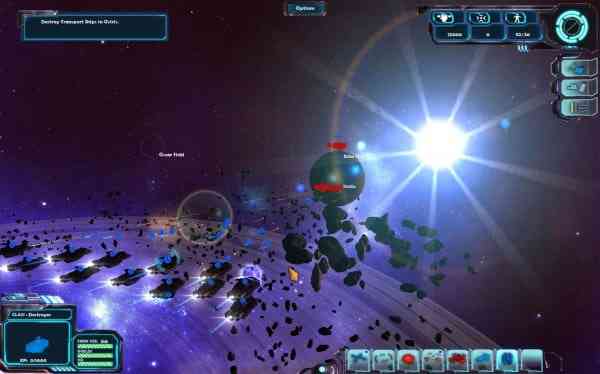 After learning the basics, you are ready to dive into the game itself. The single player campaign is the best place to start, which boasts a storyline spanning sixteen missions long that slowly ramp up in difficulty; however, at the briefing of each stage, you are given the option to adjust the difficulty between easy, medium and hard.

Gameplay is nothing that hasn’t been seen in many other RTS games before it. You have a construction ship orbiting a planet that starts with a set amount of resources in the form of crystals. The ship’s purpose is to build a mining facility in the nearest asteroid field to collect more crystals, which are automatically added to your bank over time. Once you have enough crystals you will need to construct a military station (unless you have one already, as is the case in some missions.) Once your station is finished you can start building a small assortment of ships to defend and attack with. I liked that the ships you build can gain experience points when they destroy enemies. After gaining enough experience, the ships can level up (up to three times) for more firepower and defense. For more complex ships and equipment you will need to build a research station.  It should be noted that you can only have one of each station type per planet, so it might be wise to build more than one construction ship depending on the region you are in, since some levels have more than one planet.

Controlling the ships is fairly simple, drag a box around a group to select them all, then click where you want them to go on the screen. You can even assign a group of ships a shortcut key, so you can quickly control them as a single unit without having to manually select them all again. For some strange reason, when directing my mob of ships, one or two units would occasionally reverse course and attempt to return where they came from, usually if they came into contact with an asteroid. It’s like they got confused and couldn’t determine how to get around the object, so they just gave up and decided to return to their original point of origin.

Unfortunately, this brings us to the part of the game that really kills it for me: the speed at which your ships move. They move so slowly going from one point to another that I often had time to grab a drink, get something to eat, start my laundry and prepare my taxes.  Well, maybe I’m exaggerating a bit on that last one, but the first mission alone had me waiting far too long for my fleet to intercept the enemy. There are shortcuts that activate your hyperdrive on your ships for  quick movement from planet to planet, or battle to battle, but if you want to get to a point somewhere else that doesn’t have these shortcuts, you’d be advised to have a book handy because you may be waiting a while. I spent time looking for some sort of  fast forward option, common in most other RTS games, but there was none to be found. I even checked out game forums just to be sure I wasn’t missing it and I was right. Who builds a RTS game in this day and age without this option? 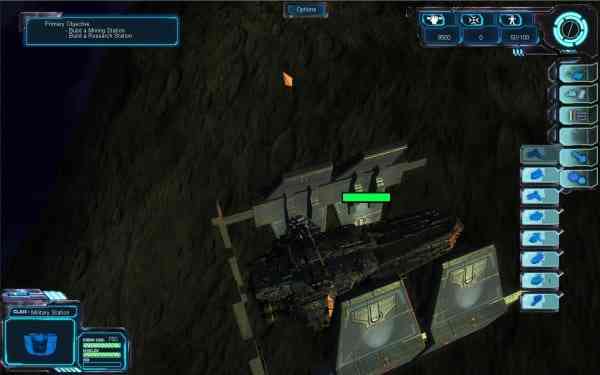 Even during some early missions I experienced a lot of waiting for something to happen. In the top right of the screen you will see a current objective status of what you need to do or look out for. I found myself watching the cycle clock slowly tick down to the next event in the mission without anything left for me to do. I can understand having a lot of time to work with when I have to manage a huge fleet, but in the early levels when you only have a few ships they could give me something else to do, or provide the aforementioned option to advance time. There’s little else more boring than sitting and watching ships slowly spawn while a clock ticks down.

If you want to avoid the storyline altogether, there is the skirmish option, which lets you choose how you want your custom match to play out.  Here you can set the number of planets, the amount of crystals you start with, the number of AI controlled factions on the map and the number of asteroid fields you can mine from. Your goal is the basic “wipe them out before they wipe you out” scenario.

Multiplayer allows you to battle human opponents online with a different set of options to choose from. You are given eight different maps with predetermined game preferences like number of planets, asteroid fields and map size.

For the social media junkies, the game menu supplies you with direct links to Twitter, Facebook, YouTube and IndieDB.com websites that have the developer on it, and more information about the game itself.

The overall look of the game unfortunately ranges from boring to downright disturbing. The game’s controls are displayed on the screen in a clear, functional manner, and the game maps definitely look like a space map but have little to write home about. I would have liked to have seen the ships be a bit more creative in design. You do have the option to watch space battles close up in a 3D rendered view of the action, but that gets old real fast. Once you’ve seen one space battle in the game, you’ve seen them all. 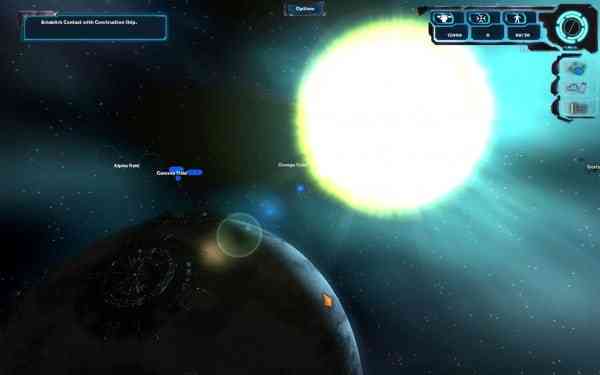 What really disturbed me is the way the human models look, especially the one you see at the beginning of each stage in the mission briefing. He looks like a deformed version of Data from Star Trek: The Next Generation. The rest of the humans you encounter are smaller windowed versions which still look like something out of the early 90’s. I may have nightmares for a while after seeing these ‘people’.

Music in the game can be quite dramatic in form, and I really liked certain portions of it, but in general there aren’t enough good parts. Most of the time when not much is happening, the music sets this mellow spacey tune, which you will hear a lot of because it loops over and over. The Battle music has the same problem of being too short and repetitive. If you are in a protracted battle, get ready to hear it again and again. Voice acting is well done but comes nowhere close to being in sync with the lips of the human characters, which makes them look even more disturbing.

As much as I love playing a good RTS game, this isn’t one of them. Too many things hold it back from being enjoyable and standing out in a crowd. Maybe if the developers address the problems I experienced in the game this title just might be passable, but right now I have to blow this one out an airlock and walk away.