I’ve always been a big fan of the strategy genre and have always loved throwing my life away on a good 4X game. But in the past little while, I found it harder to find a truly great one. I could play to my heart’s content on other 4X-ers I’ve reviewed, but I always had to overlook some serious bugs in order to enjoy dominating the universe. So it was with some trepidation that I took on this review, thinking that I didn’t really want to have to tough out another rough around the edges exercise in galactic domination. What I got from Galactic Civilizations III, however, was a well made, well balanced and a hugely fun game where my only thoughts were on domination, not the bugs I had to deal with.

The follow up to the popular Galactic Civilizations II: Dread Lords, Stardock brings the series to Steam with a shiny new version that is a real delight to play. It brings all the staples of a good 4X to the table that will have you pondering the best strategy for domination. You have multiple races to choose from, each with their own religious, economic or military tendencies that all factor in to how their races can spread across the stars. There’s also a Create Race option, which is just fantastic. It’s not overly in depth, but you can create a people who are as likeable, malevolent or aggressive in whatever image you like. I made the Transformers, both Autobot and Decepticon, tailored them to how they’re beliefs would fit into the game and went about crushing empires beneath Optimus Prime/ Megatron’s heel.

You obviously can also choose how your galaxy will look as well. From how many asteroids and anomalies there will be, to how many habitable planets and stars there are, to how many other races and resources there will be. I played on the ‘review recommended’ settings a couple of times (which was small galaxy, tight clusters) and it was a real race to colonize and find allies as everyone scrambles to gobble up worlds and resources. After a couple of dalliances into this, I decided to make an Asgardian race (because of course) and expand the map to a bigger size with more habitable worlds. That tacked on a minimum of 8 hours to my match. The bigger the map gets, the harder it is to roll across the galaxy as your ships have a limited distance they can reach from your home base. The bigger the map, the more ’empty’ space there is between empires and the longer it is going to take to not only reach them, but to ultimately dominate/ conquer them. This made for some serious gaming time that resulted in a couple of sleepless nights, a brief sleep and then as many turns as I could get in before work.

In the game, your choices as you colonize reflect your ideology as either Benevolent, Pragmatic or Malevolent. These give you points that help get you unlockables that will grant you bonus rewards such as constructors or boosts to your economy or ship production etc. The worlds that you can colonize all have varying boosts as you might expect and they also come with a level that will dictate how many resource tiles the world contains. The tech tree is also quite in-depth. I never really branched out past the basic version, but you can upgrade pretty much everything. Weapons, resources, diplomacy, economy, travel speed, the list is quite lengthy and each of them have several tiers. Most of them have specializations that can result in different ways of development each time you play.

“This made for some serious gaming time that resulted in a couple of sleepless nights, a brief sleep and then as many turns as I could get in before work.”

Along with being able to tailor your race, you can also tailor build your fleet. No matter how diplomatic you are or how economically powerful you become, going to war is an inevitability. If you find the ships that you research to be bland, well, build your own. The ship design is intricate as you can choose hulls, shield and weapon types and what engine to put in. It’s here that I realized I probably should have researched some of the reduced sizes for these things. If you have those, your newly designed ship can pack way more of a wallop since it can fit a lot more in its hulls. Your space stations are also going to need your research time as they are both your resources collectors as well your deep space territory expanders. So, researching mining as well as defense is going to be crucial when your dropping a base deep in enemy territory to push their borders back and steal their resources.

The other thing about GalCivIII is that it looks good! The cut scenes (that I saw) were crisp and looked much better than I expected. As well, the space battles also looked very nice. Whereas other games will cheap out since most people push ‘quick battle’ anyway, this one did not. If you so choose to watch the battle, you won’t be disappointed! It can just take a little bit when the fleets get bigger. 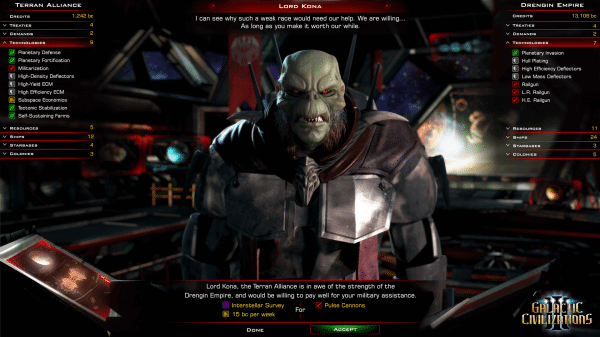 There were some drawbacks, of course. The diplomacy in the game is pretty solid, but there were times that it could have been better. Like when I was locked in a hardcore war with a rival and my ally was in one on the other side of his borders and he simply decided that we were at war. We were allies at war together, trading, giving each other resources, tech and credits and then he declared war without warning. I am also a big fan of crushing my opponents beneath my heel of military might, so I tended to fight a lot. While the wars were really drawn out, once you got to the large carriers, they were almost overpowered. With proper research and the right shipyard placement, you can build half a dozen large cruisers and run amok across the galaxy. Obviously, it’s not THAT simple, but it’s not far off. It made the drawn out wars seem even more drawn out when I crushed their fleets in 3 turns and it takes my invading ships 8 turns to reach a single planet.

I also had an issue with organizing my fleets since the tutorial wasn’t clear on it at all as well as having an issue with how to best tailor my worlds to maximize their boosts since they were also difficult to understand. I say ‘had’ because they patched that while I was reviewing it and fixed these problems almost entirely. I also thought the alien AI wasn’t exactly brilliant, but the day one patch is supposed to be coming with more fixes, AI included, so hopefully some tweaks will make them more intuitive.

“With very few drawbacks and some very interesting game modes still coming, this game is going to be a life suck.”

So here’s the addendum paragraph. There’s a multiplayer mode that comes with this game that makes me absolutely giddy to think about. However, I couldn’t play it since there isn’t really a bunch of matches going on since it’s pre-release. There’s also a campaign mode that I’m very intrigued by but that won’t be available until launch day. So, while I have confidence that these modes will be equally as good, I cannot back that up at this point.

Overall, fans of the 4X genre are absolutely going to want to pick up Galactic Civilizations III. It’s in-depth, addictive, time consuming and a helluva lot of fun. Whether you want to be a money maker, a military genius or a peacekeeper, you can do it. With very few drawbacks and some very interesting game modes still coming, this game is going to be a life suck. Whether it be campaign, multiplayer or simply an ‘insane’ size map and all the races including the ones you create, you will really enjoy throwing whole days away on galactic domination.