There have been quite a few games lately that could be described as more of an experience than anything else, and Ether One certainly joins them. Primarily an exploration game, players are presented with puzzles along the way which can be ignored for the most part if you wish. Dive into Jean Thompson’s memories and try to put back all the pieces of her dementia-addled mind, moving through four of her most memorable locations.

You work for the Ether Institute of Telepathic Medicine, a company able to portray memories as 3D worlds for you to explore and potentially fix. It’s an interesting concept, and White Paper Games has done a great job of making these worlds feel ominous even though it’s not a horror game. The feeling is more unsettling than anything else, making you feel like something is never right. This feeds back perfectly to the concept that you’re not in a healthy mind. If you’ve interacted with anyone that suffered from Dementia or Alzheimer’s, it’s easy to see how well the developers have portrayed it. It’s like you’re wandering aimlessly, seeking the answers and steps to mundane questions or tasks like how to make a cup of coffee or what item needed to be ordered for the upcoming festival.

Ether One features a great inventory and hub system to incorporate this as well. With the press of a button, you end up back in the hub with four shelves to place various items. You can only carry one thing at a time, reinforcing the inability to constantly multitask. Many items can be picked up throughout your stroll down memory lane, but you’ll never need all of them. By the end of the game, you end up with an assortment of seemingly random odds and ends like multiple fuses or leaflets that you never need again. As you progress, this collection of potential junk grows and grows, with older puzzles quickly forgotten if you didn’t write down key pieces of information.

“White Paper Games has done a great job of making these worlds feel ominous even though it’s not a horror game.”

That was actually one of the best parts about the game: the need to write notes. I know that may seem tedious but it’s a reminder of what things used to be like. There weren’t strategy guides everywhere, let alone videos, so you’d have to write everything down. Sometimes the booklets would even have a notes or codes section. Really though, it adds a lot to the dementia issue. Notes and instructions everywhere, for seemingly random and simple things. It adds a physicality to the virtual world you’re exploring, and if someone took a look at your notes they would likely have no idea what you’re writing about.

Now, all these things are great and all but we were actually prevented from finishing our playthrough. The PS4 build crashed on entering the third area, Pinwheel <>, and wasn’t fixed by restarting the entire game. Both times we got there, as soon as it would try to load into the zone it would crash. A little investigating has led to the conclusion that a lot of other people are experiencing a multitude of bugs, and it’s really disappointing. Ether One really does have a lot going for it without all these issues, but if you can’t complete the game then what’s the point? There’s been a patch for Europe, but so far nothing for North America. 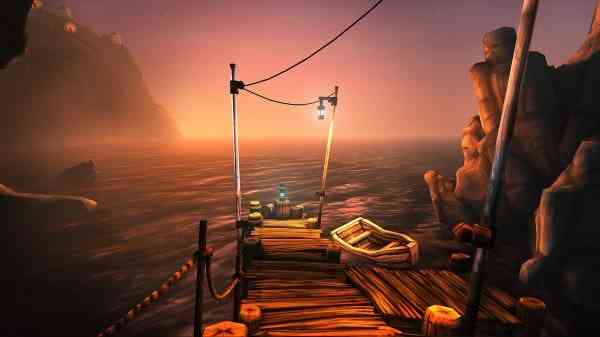 Aside from the buggy state of the current build, I have to say that the artwork and style of Ether One is gorgeous. The environment art is gorgeous and feels like a story book, while the soft lighting is nearly perfect in many areas. They’re not shown frequently but the particle effects are nicely done too, particularly when collecting the ribbons that you need to progress. It’s too bad viewing the second half of the game was limited to videos and screenshots, as a good portion of the fun was just exploring and looking at all the art.

Ether One is currently free if you have PS+, so there’s no point in not getting it. The developers are working on patches, so hopefully within a week or two it’ll be much more stable in North America. It’s too bad, a lot of companies are struggling with launches and it seems that issues keep being shipped due to time limits or simply not being found. Because of this, Ether One loses at least ten points and it probably should be more, but there’s something about it that’s just so charming and original. So in the meantime, give it a download if you like exploration and puzzles but maybe wait until there’s an update before you give it a shot.