This one was like a roller coaster for me. Or a Katy Perry song. I was hot and then I was cold. I’d go through a period where I was an absolute yes, and then I’d realize I was an actual no. It’s a bit difficult to decide how I felt about Fort Triumph overall. At the end of the day though, I think it has the most to do with who the game was made for. What I’m trying to say is, I’m sure there is a target audience for Fort Triumph, but I am not it.

So, if you are just arriving to Fort Triumph, it is a tactical fantasy RPG, one-part XCOM and one-part Heroes of Might and Magic. And if you think that in general, it is unfair to compare games to more famous games, or that specifically, I invoke XCOM too much, well, you are probably right. But Fort Triumph makes that comparison right on the store page! By and large, that comparison is fair. You move your party across an overworld map, build up and manage your titular fort, and command your guys in grid-based tactical fights and goblins and whatnot.

The thing is, those other games (XCOM, Heroes of Might and Magic, you can throw Final Fantasy Tactics into that too) are complex. I know this because, I have played them many, many times. I am a tactics nut. I may even be a tactics snob, which is a “me problem”. My measure of complexity is how different the game can play through multiple playthroughs. In Final Fantasy Tactics, the story never changes, but the job system means there are hundreds of ways to design characters and parties, and that every game involves different strategy games. 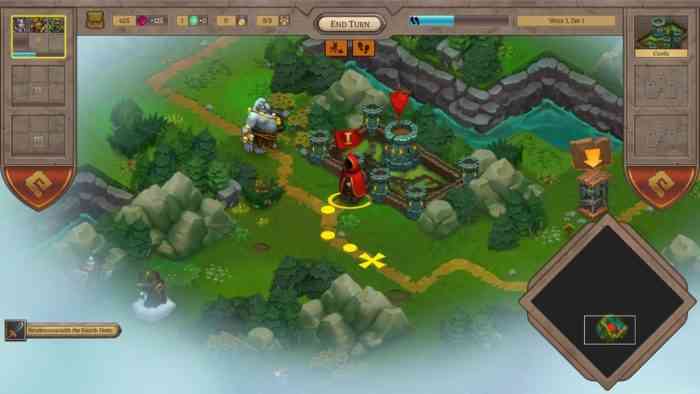 I restarted the beginnings of Fort Triumph a few times, and this was not the case. The characters don’t have a lot of range for growth, and the fort building system turned out the same way each time. As someone who obsesses over that sort of decision making, Fort Triumph couldn’t hold my attention for long. But that’s not to say that there is no innovation.

Where Fort Triumph feels good is in how the player interacts with the environment. Every hero has a move that can move stuff around. The fighter has a powerful kick. The wizard has a wind spell. The archer has a grappling hook. They can use these abilities to say, pull one bad guy into another, or kick a tree over so it falls on multiple enemies, stunning them. It’s a neat trick, and surprisingly versatile. It got to the point where I was relying on it, just to see what I could pull off even if it wasn’t the most efficient way to fight.

I don’t mind a somewhat simplistic tactical RPG if I get into the story or the world. And this is one of the places where I fear Fort Triumph may not be the game for me. It’s got jokes. It’s very funny™ is what I’m saying. I’m not friends with any thirteen-year-olds who love Deadpool, but if I was, I might recommend this game to them. It’s fast, light, and easy. The game seems somewhat aware of fantasy tropes and isn’t quite deconstructing them so much as acknowledging them as they whoosh by.

This kind of writing can be nails on a chalkboard if it is done wrong, and Fort Triumph never gets quite that bad. That makes me think that people who enjoy this kind of lightheartedness will be really charmed. But I had trouble engaging with the flat story. No one really wanted anything, it was just a bunch of fantasy archetypes going through the motions and then wryly observing how they were going through the motions.

So who should be playing Fort Triumph? Young folks, I’d say. The sense of humour and simplicity make it sort of a slog for veterans of the genre. But the flexibility of the terrain system and the breeziness of the writing make me think this would be a great way to introduce someone to this style of game. They can work their way up to those more complicated experiences. For now, they get to live in a world where everything is simple, and magical wind can blow your problems away.