During my time with Floor Kids, all I kept asking myself was, “Why aren’t there more breakdancing games out there?” It just seemed odd that more didn’t exist; but then again, perhaps it’s fitting considering its a subculture that is niche, underground, and not necessarily mainstream enough for mass appeal. But Floor Kids is just so darn approachable that all I want to see going forward is more games like it. Developed by Hololabs and produced by MERJ Media, Floor Kids is a joyful jam of combo-stacking gameplay, slick sketch-artist visuals, and head-bobbing hip-hop beats. It sounds like a mouthful but Floor Kids is a laid back and fun music rhythm game that is hiding a deep and competitive layer that is hard to put down.

Floor Kids oozes style above all and that’s immediately apparent with its infectious and simple hand-drawn graphics by artist and creator JonJon. Coupled with some truly mesmerizing animation, Floor Kids is a game you’ll want to show off to friends and family. It sounds fantastic as well, boasting an original hip-hop soundtrack from DJ/producer Kid Koala that will be stuck in your head for days. But while its presentation is certainly a talking piece, its Floor Kids’ addictive breakdance battles that really elevate it above other music games.

Busting out moves is as simple as tapping the face buttons in time with the beat but it’s the combination of button modifiers and stick movements that make Floor Kids so much fun to play. At any given time, you can swap between four different dance styles: top rock, down rock, power, and freeze. Top rock is the easiest of the bunch which involves dancing while on your feet; down rock is all about getting down on your hands and knees; power moves are based on famous spin moves; and lastly are the freeze moves that rile up the crowd with by balancing that can rack up your score in no time. Each battle is approximately two minutes long, and effectively switching between each style and its assortment of moves adds to your combo meter, which gradually grows the more you can wow your audience. 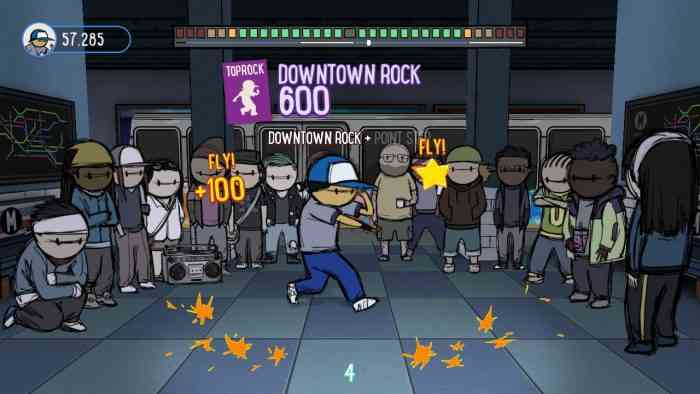 There’s a diverse set of b-boys and b-girls to choose from and each has their own distinct move set that sets them apart from one another. They may all control the same, but it’s their unique dance styles and move chains that make it fun to experiment with them all. Pulling off every move during a dance battle will only get you so far, and attempting to get all five stars in every venue will require a few more advanced tactics. You’re graded on a number of different factors that, when pulled off, can skyrocket your overall score. It took me some time to get used to throwing in hops, holds, and poses, all of which are useful in boosting your grade at the end. The biggest one, however, is your dance flow, which grades on how well you transition one move to the next. This is, by far, the most challenging (but still rewarding) aspect of Floor Kids that pushed me to get better.

You see, each b-boy and b-girl have various move chains that transition into one another to make for truly incredible moves and lovely animation. During dance battles, you’re given a hint to what the next move is above your head but remembering the name and corresponding button prompt can be tricky. Only by paying attention and memorizing the moves will you earn top marks. Thankfully, there’s an in-game breakdown of each character’s move set and combos to study before entering the next level. Of course, Floor Kids is also about freestyle improvisation so you’re free to mix and match moves however you please, but if you’re the type of person that chases high scores, you’re going to want to get good with specific characters fast. 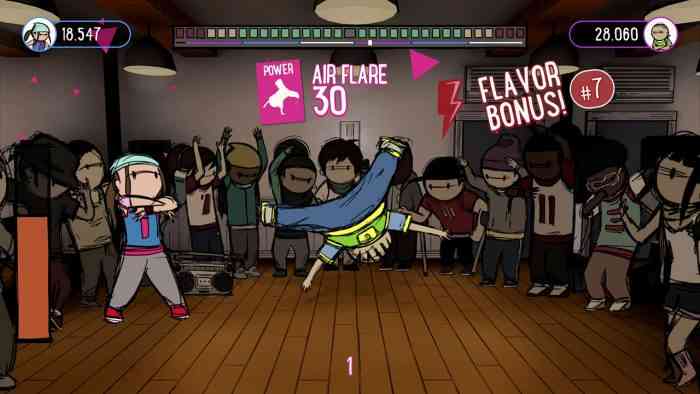 Floor Kids isn’t afraid to break up the pace either. Each song has a chorus section that stops the action in favour of a short QTE sequence. These involve pressing buttons in time with the beat. It can be a bit tricky getting the timing right (especially in the last few levels) but once you get the hang of them, they serve as a nice palette cleanser. They’re also a great way to boost your score at the end if you haven’t had the smoothest dance routine.

While Floor Kids had me glued to my Switch longer than I care to admit, I still wish there were a bit more to do. Outside of the single-player — which doesn’t take that long to wrap up — a multiplayer mode is included that feels just like a proper dance battle. Instead of split-screen play, players will take turns going back and forth on the same track. Despite taking a rather old-school approach to multiplayer, I had fun with it cheering and booing my friends at all the right times. Pulling off a sweet power move at the finish that just barely edges out your friend’s score is a great bragging moment that I soon won’t forget.

Floor Kids is a welcome addition to the Switch library. It happens to be one of the freshest gaming experiences I’ve had in a while thanks to its superb visuals, funky soundtrack, and fun-to-play mechanics. At its most basic, Floor Kids is a fun music rhythm game that’s easy to grasp. But if you dig deeper, it transforms into a more complex and challenging one that will take you by surprise. Floor Kids is something new, different, and original — and that should be reason enough to give this one a try.