There was a bit of an uproar in the game industry last year. Harmonix, well known for their popular rhythm games, announced their partnership with Disney Interactive, promising a wonderful experience for music fanatics and Mickey Mouse fans alike. Together, they have developed Fantasia: Music Evolved, taking elements from hits like Rock Band and Dance Central, and adding the magic of Fantasia and Fantasia 2000, creating a game that is quite unique.

In my opinion, a rhythm game such as this really doesn’t need a plot, yet Harmonix chose to add a story to it. Disney fans take note…the game is very, VERY loosely based on the classic films, with only the mysterious wizard Yen Sid and the apprentice hat making an appearance. Along side a young lady named Scout, you are tasked with ridding the world from a great evil, The Noise, who is wreaking havoc in the universe with an awful sound. Realm by realm you discover music, magic, and hidden secrets to aid you in your quest. While it has the makings of a wonderful Disney adventure, I found the campaign to be extremely boring. And to top it off, you need to play through it to unlock songs. To quote my daughter, “Can’t we just skip all this crap and play??” Add dreadfully long loading screens, combined with the campaign, and you have some elements that somewhat take away from the experience. 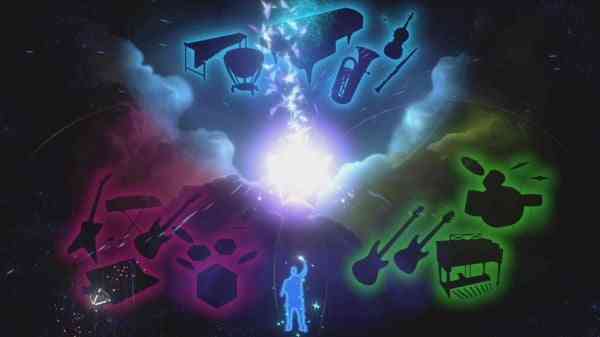 True to other rhythm games, the goal is to dance or play an instrument to the beat on screen, but rather than strumming or striking a pose your instrument is your hand, sweeping and punching your hand to the queues on screen in various directions. You can orchestrate the song as it is, or remix by switching instruments mid-song, with a simple punch and sweep when the icon appears. Successfully doing so gives you points, upwards of 12x, which allows you to unlock other instrument remixes to further progress the game. There is also a bit of customizing of the music in the way of composition spells, special magic found hidden with each realm, that allows you to add some very cool effects and allows you to mix and record your own track, adding a nice personal touch to each song.

Never have I felt so elegant playing a video game! My body swayed to the music, my arms sweeping the queues with flourish and grand gestures, and I insist that “jazz hands” are a must! I REALLY got into conducting, and thought I truly looked and felt like a real maestro, although I’m sure my daughter would tell you I looked pretty funny, waving my arms around. I was pleased that the Kinect was very accurate tracking my movements, and quite thankful that I was able to play in my small living room. A large area is not required to play, but a low ceiling may be a problem, especially if you’re an enthusiastic player like me!

However, even with all of the remixes and spells and things to unlock, the gameplay does grow a bit tiresome after awhile. Pretending to conduct a grand symphony is fun, but it does lose its appeal very quickly. There is also a very steep learning curve, which I’m afraid some may dismiss as being way too complicated (much like my daughter and her friend did). There is no difficulty level, and while there is no failure like in Rock Band, there is now way to dial things up or down if it gets too tough or too easy. I know of some little ones who will no doubt find themselves overwhelmed and frustrated, and some rhythm game fans that will want an added challenge. And oddly enough, there is no leaderboard. That’s one of my favourite things in Dance Central and Rock Band, knowing you beat your friends score at the end of a song, but sadly that’s no where to be found in Fantasia: Music Evolved. 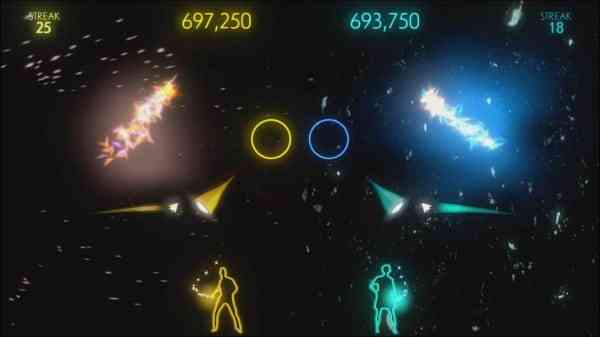 The song list is quite small, only 30 or so tracks to choose from, although each have 2 remixes that make it sound like an entirely different track. I thought the variety of classical and contemporary music was a just the right mix, exquisite symphonies from Bach, Liszt and Tchaikovsky, to rocking out to modern-ish hits from The White Stripes, Imagine Dragons and Lorde. I was a bit disappointed that despite being a Disney game, there really aren’t any Disney songs on the list. I think it would have been pretty cool to play through one or two fan favourites. As mentioned previously, the songs are unlocked in the campaign, but it you want to play without getting any achievements, there is a party mode available. You can also download specific music packs on Xbox Live Marketplace. These include new songs as well as “remix packs” of tracks already found in the game. Overall there will be more music to enjoy, but at a cost.

The campaign’s saving grace perhaps would be the wonderful and magical worlds to explore, with the help of a magical sphere called the Muse. These realms are filled with beautiful colourful backgrounds and environments that contain wondrous creatures, which makes playing through the story somewhat bearable. Each realm is filled with magical secrets to uncover, songs to unlock, and composition spells to reveal. It’s quite delightful to interact with the environment, moving your hands along a group of mushrooms or a school of fish to reveal beautiful tones and melodies.

I really wanted to adore Fantasia: Music Evolved, but I have a bit of a struggle recommending this as a family game. With the difficulty and steep learning curve, children will likely struggle, but they will likely enjoy the colourful backgrounds, and it’s only fun to play for 10 minutes here, 20 minutes there. The core gameplay is great fun; it’s just that getting to it can be somewhat of a huge drag. Having the songs locked in a boring campaign and the inclusion of long loading screens really took a lot of the fun away. That being said, the environments are quite beautiful, it works quite well with the Kinect, offers a unique experience for music game fans and waving your hands in the air to music is actually really rewarding! While there is much room for improvement, Fantasia: Music Evolved is still fun, and despite the issues I had with the game I still consider it one of the better games to play on the Kinect.