Over the years I have played my fair share of side scrolling shooters and shmups. Developers are always looking for new ideas to gain some attention in an already busy market. An unexpected entry into the shoot-em-up genre is Harmonix, who recently released the ambitious side-scroller, The City Sleeps.. Yes, the same Harmonix that brought us Rock Band, Amplitude, and Frequency. So does The City Sleeps rock out, or does it put you into a deep sleep?

You play as Poe, a “dream exorcist” of sorts that enters bad dreams of the people in the city, and helps drive them away. The basic gameplay is set up as a twin-stick shooter. The left analog stick moves Poe around, while the right stick is used to aim and shoot. She also has a melee attack if enemies get too close, but I never really used it much, because it seemed I just ended up taking damage. Poe can dash around too, which did come in handy, although not as useful as you might think when there was a lot of action on the screen – you’re likely to just dash into taking damage.

Poe has a few extra skills to aid her. She has a special attack that covers pretty much all the screen in the form of a giant sword-like arm that you can swing up and down with the one analog stick. This special move is available when its power fills up from attacking enemies. It did come in handy especially against the bosses or huge mobs. Another thing Poe will have to assist her are “ghosts”. These little orb-like spirits (which are equipped between levels) follow her and can be sent to possess objects which – depending on the type of ghost used – can heal Poe or fight enemies for you. Certain objects will have different shapes the ghosts can go into. Some shapes will assist Poe when she is in range or fire out bullets at enemies or randomly spew out health pelts. It’s a cool idea, but I found trying to select the objects for the ghosts to be very touchy and if the action is really hectic, it got even more annoying to deal with.

There are three main levels in the game, and five stages per level right now. Each have their own themes and music, but one thing kept nagging at me as I played. When I play a shooter I always look for some sort of feedback. That sense of feeling the impact of my bullets and superweapons. I don’t feel that in this game. Everything feels muted and detached, and way too mellow. Sure, the action and that shmup feeling is there, especially during the boss battles, but the game feels like it’s missing something. 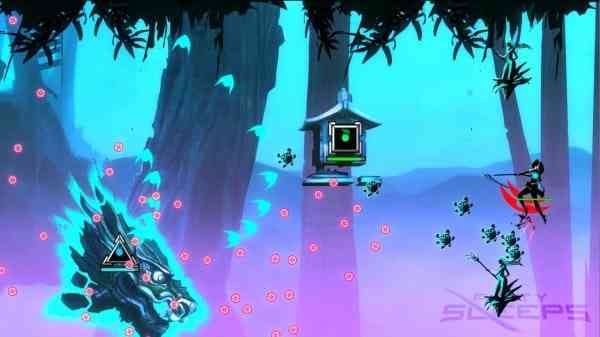 Graphically the game looks nice and clean with an art style I did enjoy. Colours with a beautiful neon palette and black silhouette style characters really work well. That also goes for the backgrounds of the levels which pull off that dream state look. Characters and Poe herself are designed perfectly and everything works from a designers perspective.

The music in my opinion is the real star of this game, and coming from a company that excels in music games, you won’t be disappointed. The developers did a great job with the trancy techno feel of everything. I just wish the rest of the audio was on the same level as the soundtrack. The “Jukebox” feature, where as you play and complete levels you can unlock music from the game and listen to it from the starting menu, is nice. As far as the rest of the audio goes its pretty sparse. You and the enemies on screen make little to no noise at all during combat, and bullet impact noise is non-existent too. Maybe that is what is missing from this game.

In the end I hate to say it, but I’ve never been so bored with a shooter before. With Harmonix behind the wheel I had high hopes for A City Sleeps, but the outcome was just so disappointing. If the game gave me a bit more punch and feedback they might have had something special. Unfortunately, although a good soundtrack can elevate a good game, it can’t be relied upon to back up mediocre gameplay. 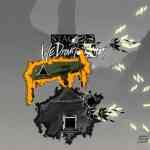 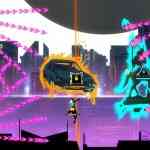 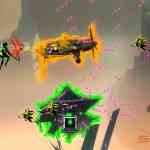 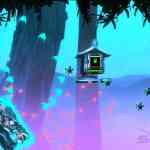 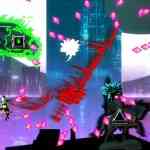 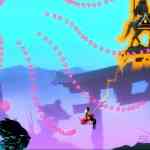