Independent PC games lack the resources to dazzle with the glamour of a Triple A title. Conversely, they allow for more focused story telling and in execution resemble a book written by one person. Within such confines where financial considerations are minimized the storytelling possibilities are endless. Within this smaller niche of games, another spectrum of content exists. The philosophical game. A point driven home by Epanalepsis.

From the get go the title of this game is undoubtedly going to turn away prospective players. It is about as opaque as one can get. If you are like me, this is the first time I have run across this word. Within the game there are three separate chapters, covering three separate time periods, and with three different protagonists. The word separate is repeated deliberately because the theme of the game runs counter to how the story unfolds.

Cameron Kunzelman has crafted a game that is not about characters but about ideas. It explores subjects such as fate versus destiny. How you react to the manner in which the concepts are explored will be dependent on what you value in a game. For myself, independent games excel when they create characters and conflicts that pull you in on an emotional level. Epanalepsis works purely as an intellectual exercise. It is less a game and more of an essay or lecture.

“Explorations of this type of thematic material, for me, work better when emotional connections are established – think of Fringe and the relationships between Walter and Peter and Olivia.”

If that is what interests then Kunzelman has crafted the game for you. If you are a gamer there is little to experience here. Interactivity is minimal as is the puzzle solving. Alternative choices in the game – in keeping with the theme – make no difference to the ultimate outcome.

Explorations of this type of thematic material, for me, work better when emotional connections are established – think of Fringe and the relationships between Walter and Peter and Olivia. Journeys may be elliptical but they have markers represented by the characters that partake of them; who being finite have a start and an end. It is what happens on the journey between those markers that matters. That is my perspective and why Epanalepsis is not my type of game. 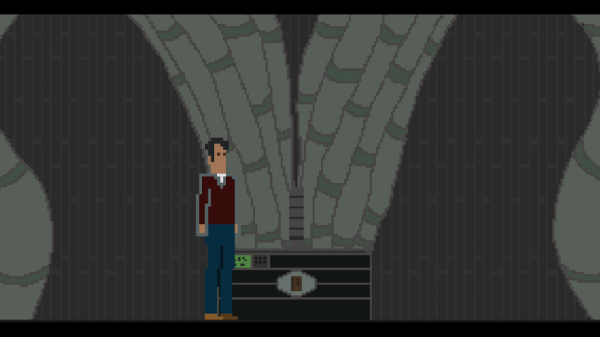 Of special note for the game is the score. It is the most engaging aspect of the game. It must also be noted that the game suffers from some technical gaffes that cause text to run off the screen. Plus there are typos too.

Kunzelman’s passion in producing this type of game is to be admired. It is just not the type of gaming experience that appeals to me. I admire the concept but am underwhelmed by the execution. Your entertainment mileage will vary.