Roguelikes are going through something of a renaissance. It’s a tricky thing though- to truly work, a Roguelike needs meticulous balancing and a sense of forward progress. That makes indie Roguelikes all the more impressive. A small dev team with limited resources for playtesting has an added challenge to get the formula right. Unfortunately, that’s where Enlightenment falters. That’s a shame because it’s clear it was put together by some creative folks with some great ideas.

Enlightenment is a hybrid Roguelike/twin-stick shooter (like The Binding of Isaac or Enter the Gungeon). That means you will die often, but each death is a learning experience that may potentially unlock new bonuses and new challenges as you make your way through the haunted facility. You’ll collect guns and gadgets and mow down hordes of zombies and weirder foes as you delve into the mystery of the Ark.

The levels in Enlightenment are procedurally generated, and that’s one of the things that makes the game feel so ambitious. Sure, everything from Minecraft to No Man’s Sky to Civilization works off of procedural level generation, but none of those games really immerse themselves in a story. Even similar twin-stick shooters that do feature a story have the characters going through the same plot over and over, maybe unlocking different endings.

In Enlightenment, a mysterious apocalypse has wiped out most of the Earth. It started with an asteroid, but after some moron started messing around with the shards of irradiated rock, a cult formed called the Scientific Church of Enlightenment. These guys combine a heavy Lovecraft vibe with Umbrella Corporation mad science and a pinch of Satanic death cult shenanigans. It’s a bonkers mash-up of tones, and it comes together to feel truly unique. Every time you go through the Ark, you sort of piece together more about the Church and the apocalypse. It’s a neat idea.

It’s the basic mechanics that feel less inspired. A combination of clunkiness and bugs make the basic running and shooting feel less than ideal. The game feels hard, as a Roguelike should, but most of the challenge comes from sheer numbers. The horde of melee enemies can be taken out from a distance, but the staggering zombies soak up bullets like they’re made of steel. Plus every so often you find yourself clipping through the semi-3D environment to impossible places. I actually got stuck in the tutorial and had to skip ahead to the main game (through a series of unintuitive menus). 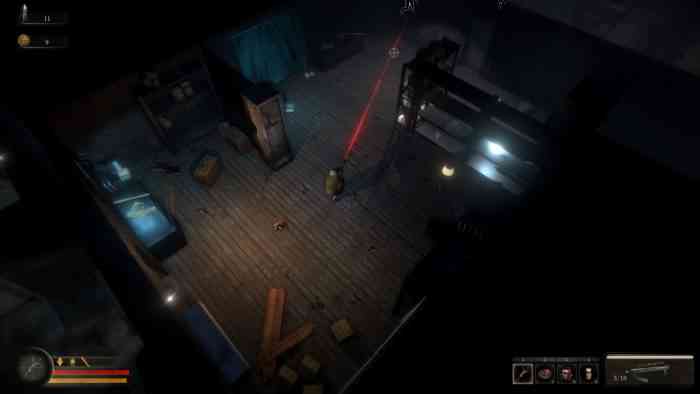 When you die (and you will, a lot), you go back to a central camp of sorts and barter your experiences for new weapons and buffs to help you along the way. It’s a smart conceit for the usual Roguelike progression system. It’s a shame most of the gear did little to make me feel like I was capable of facing down the horrors of the Ark.

A microcosm of the varied quality can be found in the graphics and sound design. It’s not a bad looking game by any means- lord knows I’ve gotten addicted to some truly ugly games. The style of the game is almost as strange as the tone of the story. Again that’s not a bad thing. The simple aesthetic borrows heavily from rad 90s horror schlock, but with the quality of an uber-refined PS2-era game. The technology has come a long way since them, but the small dev team contented themselves with graphics that could rival something from the era of Grand Theft Auto: San Andreas. It’s sort of funny to think of how much the tech changes. As with the gameplay, small graphical bugs and hiccups remind you that you’re playing an ambitious indie. Couple that with the ludicrously poor localization, and you have something of an ambitious mess.

So die-hards of the genre will find some neat new ideas. Twin-stick and Roguelike fans are always questing after new items, and Enlightenment is weird enough to be unique. It tries to tell a story while pushing you to grind for cash and experience to get loot, all so you can plunge back into its unforgiving dungeons and die again. If you’re looking for a challenging diversion, Enlightenment could be the absorbing game you need. If you’re looking for something more relaxing or polished, you’re more likely to encounter horror than wonder in the Ark.