Being a MMO buff, it’s been quite some time since I’ve found a free to play MMO that’s caught my attention for the long term.  While millions play the standard big budget blockbuster MMORPG’s that are based on a pay per month structure, there is a large audience that enjoys playing the casual MMO’s that don’t cost you anything out of your pocket to play.  While these free to play games have been around for years, I’ve never found one that I stuck with for an extended amount of time comparatively to the larger scale MMO’s available.  Our Editor-in-Chief assigned me a review for a new MMO and I have to say that I was a bit excited, and so began the journey of installing Elsword Online, a 2.5D fantasy MMORPG sidescrolling platformer beat-em-up.  Yep, that is quite a mix of genres indeed.  If you’ve ever played Grand Chase or Dungeon Fighter though, you’ll feel right at home.

When you first log onto Elsword Online you’ll need to choose from one of the five available characters, each of which plays very differently from the rest.  You have Elsword, a close combat swordsman; Aisha, who uses magic to attack multiple enemies; Rena, who is the ranged character type; Eve, who uses magic and buffs; and finally Raven, who is the lightning quick melee attack type.  As you progress through your character’s levels you get to choose your branching class type at level 15 and then again at 35, and both styles vary quite differently and play almost like a different class from each other.  With your character in tow, you start picking up quests to complete, gain new items and money, and play with friends to complete the harder dungeons together.

Where Elsword Online excels is the ease of combat.  There is no need to have multiple hotbars with multiple rows and binds to press; you essentially only have two to five buttons that you will use at any time throughout the game.  If you have a gamepad you can even map the buttons to your favourite controller, which feels much more appropriate given the beat-em-up genre and button-mashing feel of the game.  The Z key is your quick and light attack while X key is a slow but heavy damage attack.  You have a combo system that can be chained into multiple hits and numerous different combinations.  From these combos you can even pepper in special attacks that use varying amounts of mana (which refills in time and through landing attacks on enemies) for massive damage.  As you level up you can choose skills in your desired tree to customize how you want your character to perform and control.  It’s definitely an effective but yet simple enough control scheme for anyone to enjoy. 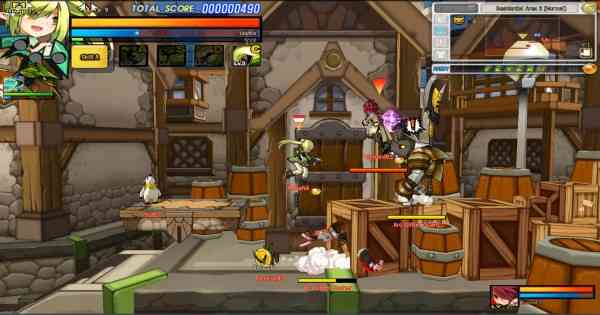 Up to three friends can go explore the game’s many dungeons and fight cooperatively with you to reach the ultimate end of each dungeon.  Killing mobs will net you coins and items, and as you complete dungeons and quests you’re rewarded with XP, more coins, and loot that is based on how well you play (you see a breakdown of your play and a rank at the end of each dungeon).  Like almost every other MMO, you are generally tasked with killing X amount of enemies to get item Y so you can go to place Z.  While in town you can form your group and each dungeon is essentially the same in structure, as you have to kill every enemy in each section before passing onto the next room and eventually finding the last area where you face the somewhat stereotypical boss at the end.  The dungeons are infinitely much more entertaining with a group of friends than they are solo, and it is definitely recommended that you bring along some friends if you’re going to try and tackle the hard or very hard versions of each dungeon.

Like almost every other MMO, Elsword Online has many features to keep you playing as long as possible, such as questing, searching for better loot, crafting, enhancing your gear, player shops, and PvP as well.  While many of the free to play games advertise that they are free, generally you will need to eventually spend real cash to either progress or bypass many hours of wasted time.  Elsword Online is no different, as there is a cash shop where you spend real cash (credit card, paypal, surveys) in exchange for K-Ching coins.  These K-Ching coins allow you to buy in-game items like pets, costumes, XP bonuses, inventory expansions, and many other unique items.  Luckily there’s no high end items that are ‘needed’ to progress, so it’s not pay-to-win like some other games can end up being.  You can choose to ‘rent’ items for a lower K-Ching amount or spend a little more for the right to own it permanently.  I’m all for cosmetic items and anything that doesn’t give a paying player to great of an advantage over a non-paying player, and as I played I didn’t really see any overpowered pay items that are ‘required’, which is a good thing. 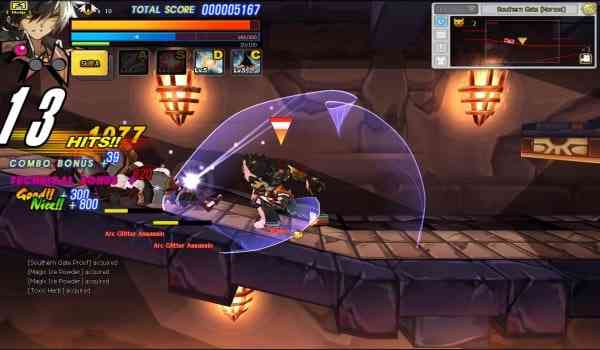 Graphically I was impressed with Elsword Online, it has that Asian manga artwork look to it.  Everything is hand drawn, and the colors are vibrant and pop off the screen.  Using your special skills makes it seem like a cell out of a comic and you don’t need a powerful machine at all to enjoy the game, which I think is good given that those PC users out there who are ‘causal’ gamers with non-gaming machines can enjoy it just like any diehard gamer out there.  The same goes for the sound of Elsword Online as well, as it is done very well and has that Asian style MMO feel to it.  Surprisingly, there is voice acting included in this game which is almost unheard of for a free-to-play game, and it’s all in the games native language, so no terrible dubbing which usually happens when a game gets ported overseas.

It would be unfair to judge Elsword Online against the bigger “pay to play” MMOs, so I’m only categorizing it against other free to play games like Grand Chase and others.  For me personally, I found that the art style, cooperative dungeons, gamepad support, in-game video recording, and the class branching are definite positives for this game. Where I grew tired though was that it didn’t seem distinct enough from other games in the same genre that are already available and it becomes very repetitive almost right from the beginning.

For a casual player that wants something to play on and off, Elsword Online is a decent choice, but those wanting to get into it hardcore will have from the repetition, as well as the built in stamina system that only allows you to play for a certain amount of time each day before having to log off and letting it reset the next day.  That being said, if you are a manga and anime fan looking for a free to play game and you enjoy mindless and fast paced button mashing, you’ll definitely enjoy yourself once you get past the steep learning curve and I don’t doubt that you will probably make a few friends in this fantasy world to go dungeon hunting with.