Stay a while and listen! Classic words every fan of the Diablo franchise has heard. It has been 12-years Diablo 3 has been in the making. If you have played through the other two Diablo games or if this is your first go with the dungeon crawler that revolutionized the gaming industry you will be in for a treat.  My first go around with the franchise started when I first fired up Diablo 2. I logged endless hours slaying monsters, exploring dungeons, killing the three Prime Evils and of course the infamous Cow level “don’t kill the cow… king…” ahh the memories. It feels like only yesterday I was running around with my Amazon slaughtering all that stood before me and collecting the riches that followed. Come with me as I lunge back into the world of Sanctuary to see what Diablo 3 has in store.

The game begins with a blue meteor falling through the Tristram cathedral. The town of Tristram has been front and center of all three games in the series. The story began when Diablo possessed the first king Leoric. The hero defeated Diablo by driving Diablo’s soul stone into his forehead essentially absorbing his essence. Upon arriving back to the town of Tristram the hero lost control of the power he absorbed and started to unleash hell on earth. Once free, Diablo started to free his brothers, Mephisto and Baal. After these three terrors were defeated there was finally peace on Sanctuary. It is up to the player to figure out what the blue meteor is and stop whatever monsters and demons are unleashed. 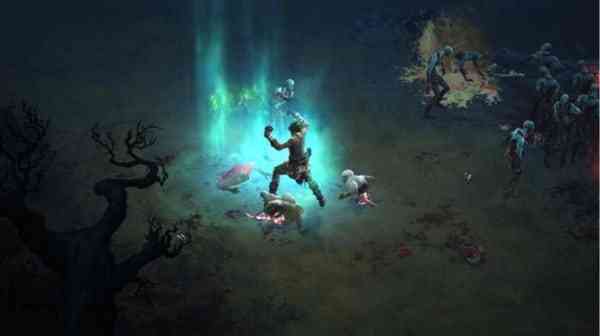 In Diablo 3, the player is able to pick and play through the game as 5 different characters: Barbarian, Monk, Demon Hunter, Witch Doctor and Wizard. These character’s all have different looks, abilities and features. To start, the player must select a character. From that point the character design is very basic. I have to admit, the lack of character customization in regards to facial features, body type and accessories is disappointing. In the end, the gear covers all of your selections and the camera is locked in a top down view so it is very tough to view these features in game. At level 10, a player now has the option of making their character a hardcore character. Hardcore mode gives the player the added challenge of having your character killed off permanently, but the reward for playing hardcore is the loot is even rarer and it provides a player with some bragging rights.

The game play in Diablo 3 is fairly simple. Point and click to where you want to move. Your attacks are bound to Left and Right mouse buttons as well as 1, 2,3,4,5 with Q being the macro for potions. There is an option to change key bindings if this does not work for you. Anyone familiar with the series will have no issues navigating and slaying with ease. For players that are new to the series the controls are easy to learn and even easier to master. Loot pick up is also easy.  All you do is click the name bar when the item drops on the ground or in the case of gold and health orbs all you do is run over them to collect them. The game has removed mana potions and health potions are on a 1-minute cool down. This is great for those players who go through full rejuvenation potions like candy. The only character in the game to use mana is the Witch Doctor. Wizards use arcane power, Barbarians build rage, Monks use spirit and Demon Hunters are very unique. They have a split orb, one for hatred and one for discipline. All these sources of power regenerate automatically and regeneration can be enhanced by gear as well as runes on abilities.

This game can be played solo or up to 3 friends.  This number is down from Diablo 2 where it was able to support 8 players at a time. Diablo 3 is only accessible with an online connection through Battle.net. As you add more players to the game a classic message comes up “Another champion has joined the game and the minions of hell grow stronger.” Not only do enemies get harder but, more rare monsters are in the world, and this is where the game shines. The great part about the loot distribution system is every player gets their own loot and gold drops. What that means is you do not have to worry about having some random person pick up that set item or rare item you have been waiting for. If it drops for you then it is yours. The game also offers an in game trading option. If by chance your Demon Hunter ends up with a two-handed sword but your Barbarian ends up with a couple Crossbows you can always trade weapons. 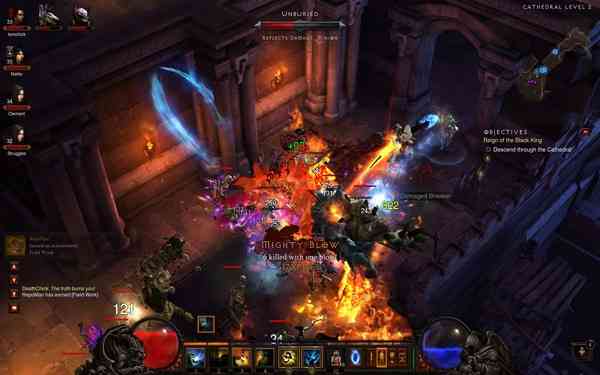 Building your characters abilities and powers has never been easier. In Diablo 2 and in most RPGs they require you to put points into different stats. Diablo 2 never let you change those stats once a point was inputted.  Diablo 3 does this all for you and gives you options. At certain levels you unlock more abilities and powers. On top of those abilities you unlock runes. These runes can alter what a spell or ability does. This means you can have two of the same characters in the room, using the same abilities but with different rune powers. Meaning the attacks can look and do different things. Someone may like a character to be more defensive, or to be more of a healer type, these runes allow for that. This allows for literally thousands of different combinations at your choosing while running around the world. Eliminating the need to visit someone to change or spend hard earned gold to fix wasted talent points!

If you are looking for an intelligent, responsive AI, this is an area where the game lacks a bit.  This being said, the game does a great job producing massive amounts of monsters. The AI enemies can be extremely easy to more challenging depending on the game difficulty and how many you are fighting at once. Some enemies have auras that can affect an entire group. Things like teleportation, electricity, fear and faster movement are just some of the things you can expect. Some cool things you can expect when fighting the AI or exploring dungeons is monsters actually crawling up from holes or scaling walls. They do not just magically appear but rather you can actually see them move. The environment around you is destructible thanks to the implementation of the Havok engine. You are even able to gain bonus XP by using parts of the world to kill monsters. Nothing like dropping a chandelier on a pack of unsuspecting zombies! Another great feature that has been brought back is traps. Open a chest only to see it light on fire or have a fireball blazing out at you. Diablo 3 has plenty more surprises for traps; however, you will have to experience them for yourself to truly appreciate them.

If using items you find in the world is not your thing that is not a big deal. Fortunately, you can craft items from the town. Currently, there are two merchants. One is a Blacksmith and the other is a Jeweler. The Blacksmith allows you to craft armor and weapons. The Jeweler will socket items, remove gems and upgrade the quality of gems you find in the world. Both of these vendors can be upgraded.

Another addition to the game is amalgamating your stash among all of your characters. In Diablo 2 players would create “Mules”.  They are level 1 character’s designed to hold all the loot that is found. Diablo 3 has changed that. The stash where you can store armor, weapons, gems and gold is now shared.  If you start a new character, that character not only gets access to your first character’s gold but it gets access to this stash. This makes it easier to keep lower level items that would be useful for a second character. The alternate character’s also have access to your artisan skills. This means you only have to level them once. This is a great feature for lazy players like me who do not want to level trades every single time. 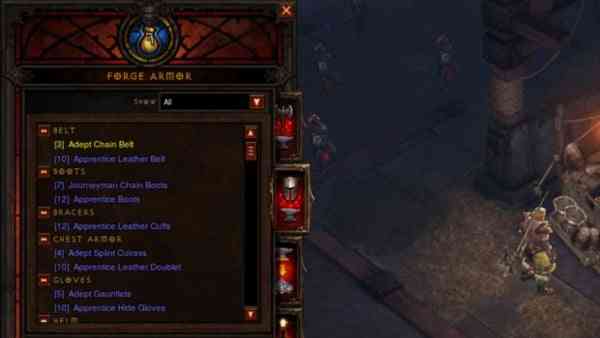 Once you have gone through the game and collected all different kinds of items, you can then make your way to the auction house. Here you can buy or sell items using in game gold.   You can also sell or buy items with real money using what is called the Battle.net balance. You have an account, much like PayPal but strictly for Battle.net. You can use this money to buy games and other merchandise directly from the Blizzard store.

Visually, this game looks stunning even while running it on low settings. Leaving the world dark and mysterious and not knowing what lurks around the corner adds to the suspense of the game. During daytime the grass, trees and water look great. Blizzard has done a great job of really immersing the player into the world with the games visuals. The character models are highly detailed. As you obtain or craft gear it changes the overall look of your character. Eventually dyeing the color of your gear is possible but until then, the game makes up for that by making sure your character does not look like it is in a clown suit.

The sounds and music in this game is top notch. The music instantly feels familiar and fills you with nostalgia. The games soundtrack manages to suck you into the world. Monsters moving, attacking and dying sounds are very crisp and clear.  Even the ambient noises are well done. The sound in this game does a great job of bringing the player into the world and adding more to the mystery of the game.

Granted, Diablo 3 launch day did not go quite as planned and was a bit of a fiasco. Server issues and connectivity problems plagued all 3 regions. I am sure Blizzard will, or may have already by the time this review is posted, resolved the issues; however, considering how long I have waited to play the game the last thing I wanted to do was stop playing because of server problems. In the end however, Diablo 3 is a great addition to the series.  The storyline is well-written and captivating. The game looks and sounds absolutely amazing and the countless hours players can spend exploring, collecting and achievement unlocking is endless.  While the lack of character customization and reduction in the amount of players you can have in a room is a bit of a let-down; the reality is Diablo pushes the series forward in the right direction.  I cannot wait to see you all in the world of Sanctuary!