Earthfall Review – Alien Shooter That Struggles to Find Its Identity

Earthfall is a co-op first-person shooter that pits you and your friends against hordes of aliens in an attempt to escape unscathed. It takes its influence from games like Left 4 Dead, however when I saw the trailer I thought it could be something a bit more like Extinction from Call of Duty: Ghosts as you face off against different aliens, trying to escape the nightmare. Unfortunately, for as fun as Earthfall looks, it has a lot of faults that make it a lot less appealing to play.

Earthfall is a story you’ve heard a thousand times before. You play as one of four available characters in a co-op adventure to survive in a world that’s been invaded by aliens after a huge meteor strike. It’s up to you to lead the resistance against these extraterrestrial foes. You’ll progress through ten different levels, all of which are extremely linear as you make your way from point A to point B all while fending off the swarms of aliens. Along the way you’ll have to complete a few objectives, and you can’t move on until you’ve finished them. While these don’t normally take too long, you’re certainly more vulnerable to attacks when you’re trying to complete them. For the most part the aliens that attack are easily killed with a couple rounds of ammo, however there are three stronger aliens that take teamwork and a bit more strategic planning to get rid of. From the aliens that run at you and blow up, leaving a cloud of poison gas, to the ones that will whisk one of your teammates away, you should be on guard for anything. Well, only kind of, as this isn’t nearly as ominous as it sounds, and these come out at ‘randomly’ generated times that become more than easy to predict. With that said, the difficulty you play on makes a huge difference on how hard these encounters will be, and more often times that not, if you’re cornered when these big bads appear, you will die.

Though there are two game modes available, online co-op and solo, both take you through the same campaign. While in co-op you get to play with friends, solo teams you up with three bots. Even on the best skill setting, these bots remain completely useless. Not only do they just kill the aliens, without helping complete the objectives, but they don’t react in a way a skillful player might. In fact, often they just stand in one place getting mauled by aliens, taking way more damage than you’d expect. Even though it’s a co-op adventure, you’d better be prepared to do everything as if you’re playing by yourself.

Alien Killing Is Where It’s At

Unfortunately, there’s nothing in the story that really grabs your attention and there’s nothing that motivates you to keep playing. If you play it as an alien-killing shooter, mowing down the enemy wave after wave, it’s plenty fun, but throw in the linear storyline of each and every level and it gets old really fast. Holospark should have taken advantage of where it’s really fun mowing down aliens with turrets, and weapons scattered throughout the map. Not only would an endless alien killing game mode add the replayability Earthfall is missing, but it would give players that fun factor that just isn’t there otherwise.

While the controls are simple and are similar to most other first-person shooters, Earthfall can’t seem to find its place in the FPS genre comfortably. The overall gameplay mechanics are lacking because even something as simple as aiming down sights with a reticle, shooting your weapons, and running around the maps are poorly done. When you ADS, the reticle fades, making it completely useless, the guns lack any sort of punch, and there’s no way to change your sensitivity, which is a must for any first-person shooter. Moving from side to side and shooting both feel like they’re in slow motion, and that’s frustrating when you have aliens running at you at full speed. Part of what makes any FPS a good one is having the fluidity of movement in every aspect of the game, and as such, Earthfall feels like a bumbling mess in this department. Holospark needs to tighten and enhance these controls making them feel a whole lot more natural, and a lot less robotic. In fact, Holospark should take the same approach with the entire game as they did with the way everything sounds. The guns all sound pretty great, shotguns, machine guns, and turrets all have their own unique noises, and the music is upbeat and engaging. And to all the success of the sound, the graphics are subpar, with drab environments. There’s nothing throughout the ten levels of the game that really stand out amongst the overwhelmingly boring landscapes that vary only in their weather patterns.

The most frustrating thing about Earthfall is that it squanders its potential at every turn. From subpar graphics and gameplay mechanics to a story that’s been told a thousand times before, and a complete lack of game variety this alien shooter could have been a lot more fun. Earthfall is at its best when you play with three other friends taking nothing seriously and just killing a bunch of aliens. If you stay at the same objective, aliens will keep spawning, so you can make your own little endless wave mode. Bottom line, there’s a decent foundation here that just isn’t well executed, and that’s disappointing. As it stands right now, Earthfall isn’t exactly worth it’s $29.99 USD price tag, though if Holospark tightens up the areas that bring the whole game down, it might be worth revisiting later on. 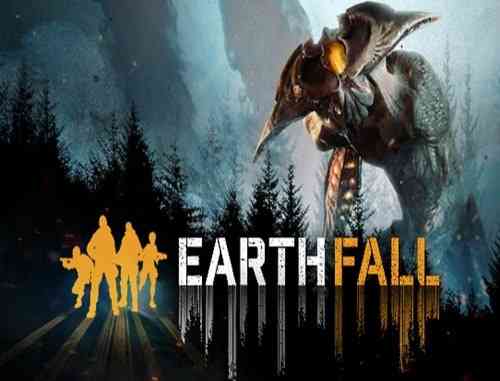