Earth Defense Force 2025 is a direct follow up to EDF 2017 and is also, apparently, the fourth in the series. The basic story is that there are giant insects invading (trust me, you get told A LOT that they’re giant insects) and it’s the same thing as 8 years ago. If you didn’t know that the last game was set in 2017, don’t worry, they let you know about every 1-2 minutes it was 8 years ago. Then, to top it all off, the Ravagers (apparently an alien race that has invaded before) have also come back with timing too good to just be coincidence. Again, if you miss that the first time, they’ll let you know again real soon. Your job, as a member of Earth Defense Forces, is to repel the invaders at all costs. They don’t actually say ‘all costs’ but the wanton destruction and collateral damage you leave behind kind of gives that impression.

What to say about EDF 2025. Well, have you ever watched Starship Troopers and thought ‘I’d really like to play this as a game, but have poor dubbing for dialogue and repeat the mission where Michael Ironside gets eaten over and over again’? Then this game is for you! Cause that’s the game in a nutshell; there are 85 (eighty ****ing five!!) missions that require you to run around and blow up aliens and giant insects alternately (or at the same time every now and then) in stages that all look suspiciously the same while people yell into their radios about giant insects from eight years ago. 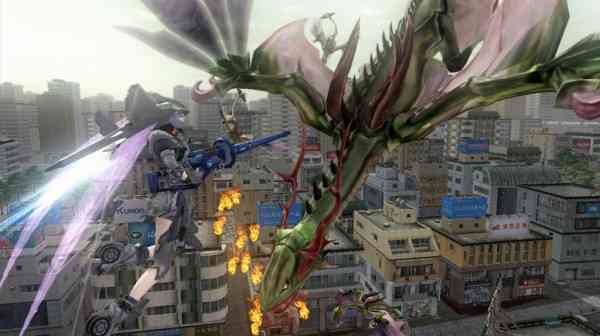 The best part about that, is in the first dozen-ish missions, you’re killing giants ants and spiders while the ‘media’ or ‘top scientist’ tell you about the alien invasion that’s taking place… somewhere else. That’s right, as ‘Major 6’ or ‘Major 12’ (they really dug deep on character names) scream about ‘fighting giant insects’ you are also treated to the radio play of War of the Worlds. Then, when the aliens finally do show up, they actually look like the walkers from War of the Worlds without a single shred of shame!

As you go through these missions, you have four classes to choose from; there’s the Ranger, the Air Raider, the Fencer and the Wing Diver. The Ranger is a Ranger, the Air Raider paints targets for air strikes or vehicle back up (tanks and the like) and the Fencer is heavily armoured and packs a variety of RPG’s for maximum explosive power. Now, forget about all the other ones because there’s the Wing Diver. The all female fighting unit (obviously not wearing pants with lots of cleavage showing, because how else do you enter a war zone?) is so insanely overpowered with her variety of laser weapons that you never need to switch up your player.

I’ve been pretty harsh thus far, so I’ll give credit where credit is due. There is single player and co-op for offline play, and let me tell you, co-op is awesome! When you play with a friend you get to make fun of the almost ‘so bad it’s good’ dialogue, the repeated maps and scenarios but most importantly, you get to have fun blowing the living crap out of giant ants, aliens and the cities you’ve sworn to protect! My friend and I had some laughs and some genuine fun playing this… for about 10 missions. Because no matter how much fun you’re having, there’s only so much you can tolerate before it becomes obnoxious. 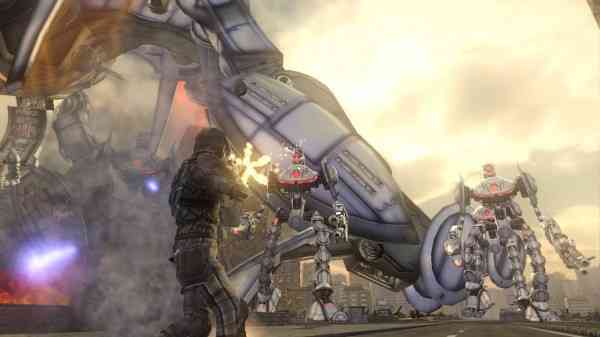 As for the online modes, basically the online co-op is the exact same as the offline co-op, except you can get two other people flying around the map who can resurrect you when you accidentally shoot a chain link fence and kill yourself. As for the online versus, it’s just you and another guy flying/running about a large map until you can eventually find the other one (which can be difficult) and blow them to kingdom come with minimal satisfaction.

Now, EDF 2025 has a reputation as a B-grade game, so that’s supposed to excuse the shoddy graphics, the frame rate drop off and sound problems throughout. But just like B-movies, saying that is just a cop out. I know very few people have the triple A game budget, but don’t use that as an excuse to be lazy. The music is also just dreadful. Ripped from the ‘80’s and slapped haphazardly into this game, it was quite evident as it grated into your mind, making sure you took notice that they were trying real hard to make the music cheesy. This goes hand in hand with the dialogue that is ever present through each mission. Think old school kung fu movie dubbing and your right on the money. 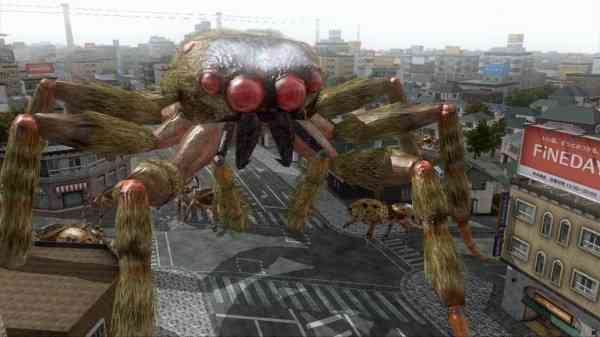 Overall, I see what Earth Defense Force 2025 is going for and it’s somewhat headed in the right direction. Some people will get a real kick out of this one and there is some fun to be had from the frenetic slaughter of massive amounts of enemies in co-op mode, but all the fun is leeched out of it in just a few missions. Add in redundant game play (on and offline), a completely joyless single player experience, an unbalanced class system, poor graphics, dated music and over the top attempts to put it into the ‘so bad it’s good’ category overwhelmingly outweigh the few positives EDF 2025 offers.

Next 1954: Alcatraz (PC) Review – A Highly Stylized Escape Attempt That Falls Just a Bit Short
Previous Tritton Kama Stereo Headset Review – An Affordable Alternative to the Piece of String Included with your PS4