Dynasty Warriors: Gundam Reborn is the fourth instalment in the crossover between Dynasty Warriors and the Gundam Series. If you’re unfamiliar with the Gundam series, it’s basically about giant mech-robots called “mobile suits” that are piloted by humans and the various battles they partake in. Not only does the Gundam series span several arcs and seasons throughout anime, but also manga as well. Having watched a couple of episodes from various Gundam timelines and being exposed to the beat ‘em up genre of the Dynasty Warriors series, I was ready to mash some buttons and admire all the different mobile suits I would be able to pilot.

In Gundam Reborn, the Official and Ultimate modes allow you to enter the battlefield and pilot a mobile suit. Official mode is where you play through the main events of six different Gundam arcs including the first Gundam, Zeta Gundam, Char’s Counterattack, Gundam SEED, and lastly Gundam SEED Destiny. Each arc has its share of dramatic CGI cutscenes and snapshots from the actual anime. Although you get a glimpse of what each Gundam arc is about when playing Official mode, knowing the whole story in detail is definitely left to the respective anime and manga. Only important events are clearly explained and played out through 2D stills accompanied a by dialogue box. Tidbits of information linking each important event are quickly sped through though, or are even non-existent. 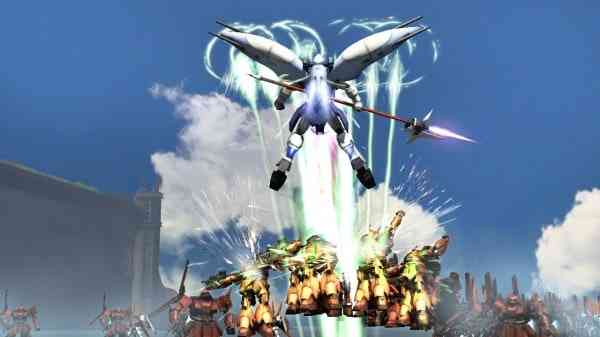 In Ultimate mode, a separate story is introduced that includes crossovers from different Gundam arcs and series. It also runs through certain terminology and features to introduce you to the game if you’re new to it or if you need a re-cap (even though Official mode does this through little pop-ups). Since Ultimate mode is based off its own story there are no CGI animations or snapshots from a particular anime, but it does contain 2D stills of characters with a dialogue box to follow like Official mode. With all the crossovers occurring this can only be fully enjoyed and appreciated by a knowledgeable Gundam fan.

In terms of combat, Gundam Reborn stays relatively the same whichever mode or mission you choose except for the victory conditions and their battle areas. Victory conditions exist in every battle and can be as simple as wiping out a certain amount of enemies or eliminating an enemy field commander. If you’re wondering what an enemy field commander is, it’s pretty much the head honcho of the swarms of mechs attacking you; and when I say swarms, I’m referring to massive swarms, an ocean of mechs. Areas or locations where your epic battles occur can be on land and even in space. Yes, space. The areas are quite basic and roughly all the same size and structure, but the actual environment and scenery amongst each one differs. Combat is the same as you mash buttons, land combos, and do the occasional strong move to wipe out more enemies in one go. Like previous instalments, couch co-op and online co-op can be played by sending an SOS signal that is available so that you and a friend can take on endless wave of mechs.

Unlike other Dynasty Warriors game, the combat is lacking in entertainment and uniqueness. With the strange surge of excitement and power seeing your character eliminate hundreds of enemies with flashy knockbacks and ground breaking smashes, it’s unfortunate that as the action happens it plays down the fact that this is a Dynasty Warriors game. It’s much too simple compared to the way everything else is presented through the cutscenes and dialogue. The AI is extremely dull with almost absolutely no challenge. They are pretty much punching bags until you wipe out all their health. Even with the various mobile suits and their specific moves, it feels very limited and constricting. 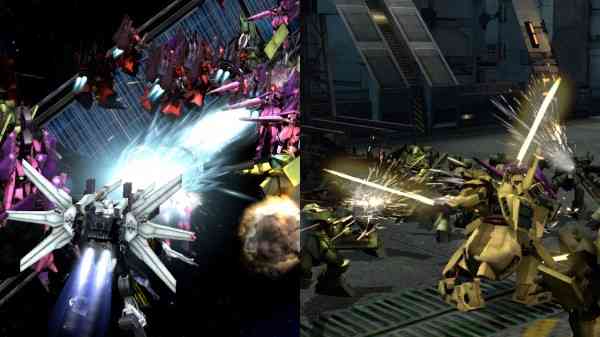 During battle you can earn cards as various requirements are met. You can also find special materials and collect upgrade plans. Cards earned through battles display a pilot and their mobile suit with a bonus reward tied to it. This can be a new character or an upgrade plan for an existing mobile suit. The cards are also a sort of progress indicator as the more you have the more things you have achieved, overcome, and unlocked. To view the cards, and even certain CGI scenes, they can be accessed through the Database mode. Materials on the other hand are used to improve specific parts on a mobile suit through upgrade plans. As an upgrade plan contains certain equipment already upgraded, these materials are used to enhance current existing upgrades or upgrade other parts that are untouched. Upgrade plans are then equipped onto mobile suits and can increase attack damage, defense, etc. Aside from upgrading your mobile suit pilots can also level up, be upgraded with team points through battles, and equipped as partners to your main pilot to aid them in battle.

The way all the Gundam pilots, mobile suits, and upgrades are utilized is extremely entertaining. Not only does it make me want to return to the areas to battle, but it also makes me want to actually learn about even more about the Gundam universe. Seeing all the pilots on virtual collectable cards with their mobile suits is so intriguing and it had me geeking out more than I thought it would. 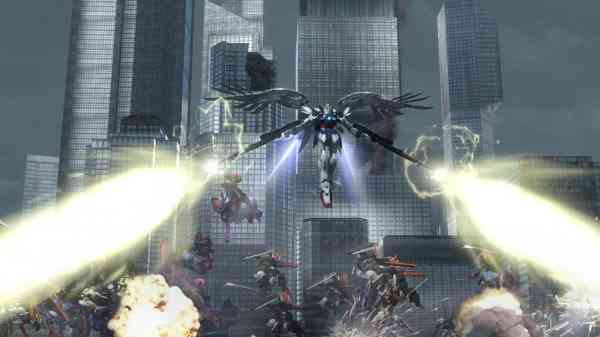 Visually, I was pleased with the details on all the playable mobile suits. With over 120 of them I absolutely can’t complain. The CGI cutscenes are also great with exaggerated effects and action. On the other hand, environments are mediocre with basic, blocky and flat level designs. While each one has its own theme, the layout is the same – unexciting and lacklustre. Nothing is over the top or special about the game’s enviroments, but I can understand that it’s just a field for all the mechs to run around and hack at each other on.  As a whole, the visuals are good, but some touch-ups and more detail in the battle areas would be appreciated.

In regards to the audio, the sound effects are pretty generic and stay relatively the same amongst the different mobile suits. Meanwhile, the soundtrack is quite enjoyable and I recognized some it from the anime. It added more emotion to the presentation of characters and events which is great. The voice acting is only in Japanese and contains no English dub like previous instalments, so reading is required if you want to understand the dialogue and instructions. With that said, it’s really on personal preference whether you love it or hate it. Personally, I enjoyed it as it contains the voice actors from the anime series.  All in all, the sound effects, soundtrack, and voice acting are admirable and enjoyable.

While Dynasty Warrior: Gundam Reborn is somewhat fun, the combat is a little lackluster with extremely basic and repetitive moves and constant hovering from one side of the map to the other to complete objectives and missions. The dialogue and CGI cut scenes within the battles do keep the battle interesting though, but the combat just isn’t on par to the presentation. The use of various upgrade plans, available pilots, and over 120 mobile suits is a plus and definitely makes me want to invest my time in learning more about the Gundam series. In the end, this is a game that would be most enjoyed by fans of the Gundam series with the immense amount of content from it, but not so much for combat as a Dynasty Warriors game.