Capcom’s latest entry into the RPG genre is a title called Dragon’s Dogma.  I’ve been keeping an eye on this game for a couple of years now, and each snippet of information released about it seemed more and more intriguing, especially given that I have always been a huge fan of Capcom’s successful Monster Hunter series.  In spite of my high hopes for the game’s success I found Dragon’s Dogma to be a bit rough around the edges.  That being said, it offers a very exciting experience and it strikes me as a game that fans of Dark Souls’ may enjoy.

Unfortunately, Dragon’s Dogma is not great at providing a strong first impression.  Flaws become visible within the first hour—the dated character modeling, minor clipping, and the lip-synching issues are quite noticeable.  Combat is quite challenging too while the music can seem too ambient and the story too vacant.  The reasons for prematurely ejecting the disc are numerous, but if you’re able to spend a few hours with Dragon’s Dogma you’ll find that it has much to offer, including epic fights against towering beasts and deep gameplay. 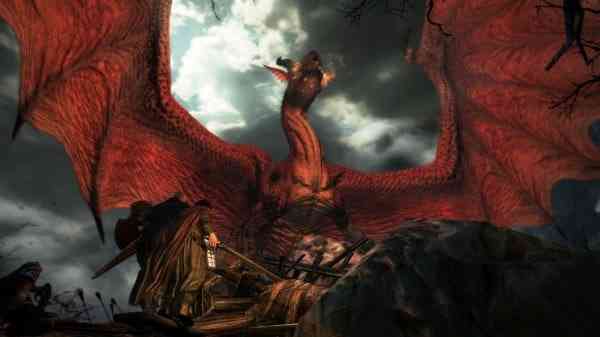 The game’s opening tutorial features a medieval style knight pursuing a large and intimidating dragon. Hinting that both the dragon and the knight are merely part of a never-ending cycle, the game’s proper beginning occurs years later as the dragon reappears and plucks the beating heart out of your character. The fact that you manage to survive this encounter with nothing but a nasty scar has everyone referring to you as Arisen – a chosen one who not only stands up to dragons but also one who can command strange otherworldly warriors called ‘pawns’.  The story is basically tossed aside for the next 30-40 hours as you take your custom-created hero and dive into the world known as ‘Gransys.’  The story only returns in vague pieces spread out by lengthy quests and side missions.  The locals you come across in the many establishments of ‘Gransys’ normally don’t have more than one line of dialogue.  It’s a shame too because the dialogue itself isn’t bad, but at times it seems like the developers were trying too hard, as most of the characters’ speeches are phrased in faux-Shakespearean turns.  It would seem that the story was purposely pushed out of the way so that the game could focus on its combat and exploration.

The controls in Dragons Dogma are well implemented, given that they have a fairly natural feel to them.  The setup includes light and heavy attacks, and a handful of unique skills depending on what vocation you have chosen.  Your vocation is the class that you choose to play.  The initial class selection in the starting village consists of fighter, rogue, and mage.  Once you have ventured far enough to reach the capital city ‘Gran Soren,’ the selection expands with the ability to choose from an additional three advanced classes and three hybrid classes.  On top of that, you can switch between these vocations at any inn, and any augments or compatible general techniques acquired from leveling up carry over.

The pawn party system for Dragon’s Dogma seems inspired by Demon’s Souls as other players who play the game have the ability to impact your single-player adventure, though in a much more direct way.  Given that you are The Arisen, and have the ability to control a human-like race referred to as pawns, you can form a party of three pawns.  The first is your main pawn, whom you create from scratch just like your own character, whereas the other two are main pawns created by other players and found by entering a foggy realm accessed by touching a Rift Stone.

This may seem like a lackluster method of implementing multiplayer, but its implementation is exceptionally good.  Whenever another player hires your main pawn, he or she returns with extra goodies, experience, and rift crystals that are used to hire other pawns that are higher than your level.   At the same time, since these hirelings don’t earn experience like your main pawn, you need to search for new hirelings often.  It’s a mutually beneficial system that involves you without becoming too big of a hassle.

As I ventured out further from the capital city, Gran Soren, I really did begin to feel like I was on the frontier, exploring lands that human feet had barely touched.  When nighttime rolled around, I immediately began forming a tighter formation with my party and would search around for shelter. Nighttime is a dangerous time in the world of Dragon’s Dogma, and if you don’t hole up somewhere safe you’ll come across some very dangerous opponents.

Borrowing from Shadow of the Colossus, many of the game’s enemies are considerably larger than you and so you often have to leap onto them during combat.  You will find yourself climbing up a hydra’s neck to chop off its head or hacking at a flying creature’s wings to cause it crash land.  The pawns will do this too if you don’t manage to get around to it yourself.  Alternately, if the pawn is a wizard they’ll hang back to enchant your sword, or if they are a fighter they might clang their shield to get an enemy’s attention.  Not only will pawns fight for you but they will also heal you when necessary, and during exploration they will search for ingredients and hidden objects as well as memorize locations to pass on to other players.  All of these details made it so that I never missed the company of other human players.  Generally when playing games of this genre, the AI companions fail to compare to a human ally.  Capcom definitely put a lot of work into making sure the pawns would behave appropriately in this game and I really appreciated it. 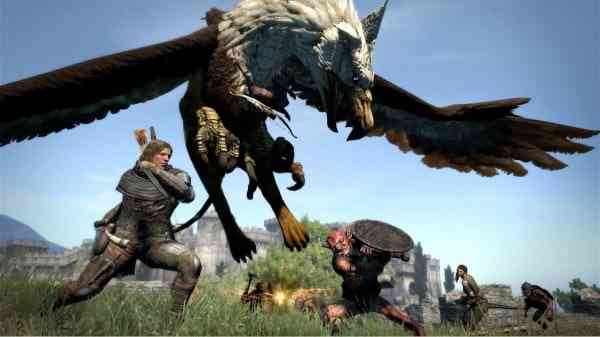 Visually Dragon’s Dogma is a mixed bag with lots of very distracting screen tearing, but some impressively large and detailed monsters.  The creatures that populate the fantasy world of ‘Gransys’ are well modeled and animated.  At times the player characters look great, while other times not so much.  It’s clear that all the effort that’s gone into the combat and character development has left other elements of the game feeling unfinished.  Graphical glitches and technical problems plague the game from the start and stick around for the majority your adventure.  There are times when you’ll run up to a quest marker on your map to find that the person you’re supposed to talk to simply isn’t there, and you have to wait five or ten seconds for them to stream in.  I found that the game benefitted from being installed on my Xbox 360’s hard drive and that this helped to improve some of the unpleasant streaming issues.  Additionally it seemed to help alleviate the frame rate drops too.

The audio holds no major surprises or disappointments in Dragon’s Dogma.  The main menu and intro song consist of an epic rock ballad that shortly gives way to the game’s more fitting orchestral background tracks.  The clang of swords and shields is satisfying, and the spells provide appropriate magical sounds during hectic battles.

Dragon’s Dogma is not a perfect game by any means. It has some pretty obvious flaws, and some mechanics may be a turn off to certain gamers. That being said, with its creative ideas, and in spite of its problems, Dragon’s Dogma manages to serve up a great fantasy RPG gaming experience that most fans of the genre should enjoy. 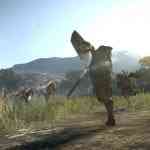 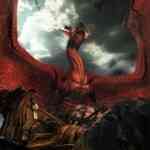 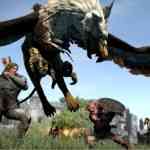 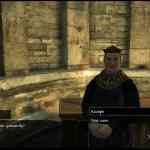 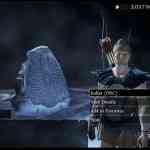 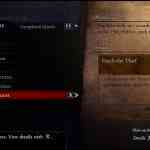 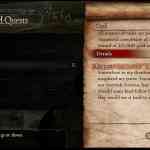 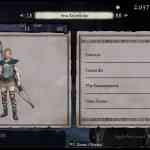