I love a good fantasy RPG, but I somehow missed Dragon’s Dogma the first time around…and the second time, too. But you know what they say: third time’s the charm. I’m glad I was able to finally experience Dragon’s Dogma: Dark Arisen on one of my favorite platforms: the Nintendo Switch. This release comes with all the content from the Dark Arisen version that came out on PC in 2016, and it makes its way to the Switch nicely. Though it doesn’t feel particularly suited to a handheld display, Dragon’s Dogma: Dark Arisen is the same cult classic it has always been, and the gameplay still holds up seven years after its initial release.

For those who aren’t familiar with Dragon’s Dogma, it’s set in Gransys, a fantastical land where humans and creatures coexist, but don’t usually get along. There, you begin as a villager in a small seaside town when a ferocious dragon attacks. Being the dumb, courageous individual you are, you attempt to kill the dragon alone using a rusty sword. Unsurprisingly, this doesn’t work out so well, and the dragon rips out your heart and eats it.

You somehow survive this and become what is known as “the Arisen” because…dragon magic, and you set off on a quest to kill the dragon and reclaim your heart. The story and characters are a bit bland, but not egregiously so. It’s not nearly as gripping a narrative as other top-tier RPGs such as the Witcher 3, but it does enough to keep you contently chugging along on your journey.

As the Arisen, you gain the ability to command human-like servants called Pawns. These Pawns come from their own dimension and exist almost solely to aid the Arisen and help kill the dragon. The Pawns act as one of the core gameplay elements in Dragon’s Dogma, allowing you to recruit various Pawns with unique characteristics and battle skills. You are also given a primary Pawn and can customize their look, skills, and even how they act in battle.

Having a crew of Pawns accompany you makes exploring the world of Gransys much livelier, and picking specific Pawns that synergize well in battle adds another layer of depth and strategy to the combat. The Pawns also never seem to shut up, which is annoying at times but can serve as a source of unintentional humor. The Switch allows players to share their Pawns online without the need for a Nintendo Online subscription, which is a nice addition for people who want to experience everything the game has to offer but don’t already have a subscription. 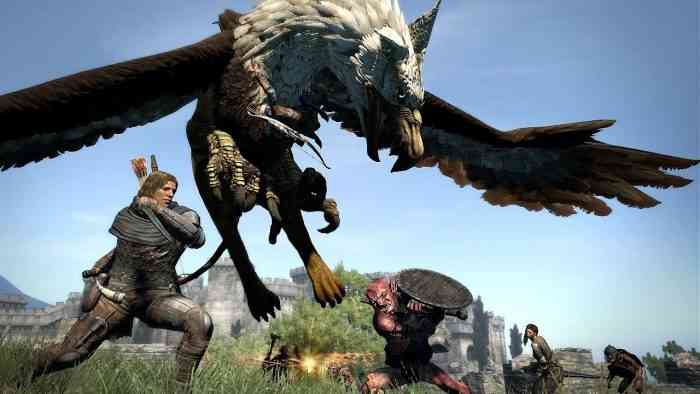 The combat is really where Dragon’s Dogma shines. There are tons of intermingling systems at play, and they somehow all work together without a hitch. At the start, you get to choose a vocation (Dogma’s word for class) but once you progress a bit you can change your vocation to something completely separate or to a hybrid variation. I began as a mage and could cast spells but was effectively useless at close range, though, eventually, I swapped to a mystic knight, which is a combination of mage and fighter.

This vocation allowed me to wield a sword or a staff, with the option to switch between using magic and melee abilities whenever I saw fit. There are also a myriad of skills and abilities to learn for each class, making the possibilities nearly endless. This versatility combined with the Pawns results in a combat system unlike anything else I’ve played. It really is a crime there hasn’t been a sequel to Dragon’s Dogma yet, because I’d love to see how far the developers could take these systems using current generation technology.

Dogma On The Go

Though I never played it myself, I know the original release of Dragon’s Dogma was plagued by a fair share of glitches and performance issues. Thankfully, the Switch handles the game rather well, maintaining a consistent 30fps framerate in both handheld and docked mode. That being said, I greatly preferred playing in docked mode, simply because much of menus and text are quite small on the Switch’s screen and there is no option to adjust the text size as far as I can tell.

Graphically, Dragon’s Dogma also falls somewhat short. The lighting and shadows are impressive, and the game is pleasing to look at as a whole, but a flat color palette and some ugly textures reminded me that it’s still a beefed up last-gen title running on a limited piece of hardware. If you want the best running, graphically superior version the PC release is the way to go, but the Switch does a pretty damn good job.

I wouldn’t call the Switch port of Dragon’s Dogma: Dark Arisen the most definitive version, but it’s definitely a very good one. The story, voice acting, and characters are pretty underwhelming, but if you’ve played the game before that won’t be anything new. What is new, though, is the ability to play Dragon’s Dogma wherever and whenever you want thanks to the Switch’s portability. That’s a big plus, but it does come with the caveat of not being fully optimized for a small screen. Still, Dragon’s Dogma: Dark Arisen is a highly competent RPG and, who knows, maybe this release is a sign a sequel is finally on the horizon.

Fortnite May Be Having a Halloween-Themed Boss
Next Cuphead (Switch) Review – A Couple of Tough Mugs
Previous Days Gone Review – Wild, Untamed and Absolutely Gorgeous