From Devolver Digital, the makers of a hundred indie games you’re probably familiar with, comes yet another tiny treat in Downwell. The action platformer puts all its focus on controls as the player is to try to make it down a well without losing all of their precious life points. Downwell doesn’t complicate things and instead offers the same satisfying gameplay loop over and over again.

Downwell centers on a young man sitting on a park bench, the time in which players assume control, who decides to leap into a well and explore its monster-filled innards. Our young man is thankfully equipped with gun boots that are tied to a limited meter designed to clear out debris and take out an assortment of enemies ranging from a static Mario-inspired turtle to a roaming ghost – which come to think of it could also be Mario-inspired – that tries to get around the game’s geometry to attack the player. The essence of Downwell involves trying to get to the bottom, and therefore the next level, while navigating through destructible platforms and the monsters that lurk around them.

“There is no better feeling than leaping off a platform and, for what seems like several seconds, not getting stopped by the level’s geometry and managing to dodge the oncoming wave of bats, ghosts, and wall crawlers.”

Environments and enemy locations are procedurally generated which fits the games ‘1 more round’ approach. Each restart and death acts as a challenge to solve the next puzzle on how to get through the new environment you’re put in. My strategy was to get to the semi-circle freeze points that allowed you to take a breather and plan out your next attack or find out the quickest path to flee like a coward and avoid enemies. Make sure to keep an eye out for freeze points as some may be hiding a secret path to a gem location that you can use in shops. There is no better feeling than leaping off a platform and, for what seems like several seconds, not getting stopped by the level’s geometry and managing to dodge the oncoming wave of bats, ghosts, and wall crawlers.

After each level you are able to choose one of three upgrades that don’t really benefit you all that much. It’s cool that your bullet casings can do damage, but not when you’re already past a section of enemies with a well-timed hop. The games combo system, that rewards players with chaining together kills without touching a platform with extra ammunition, was a greater source of compensation that actually had meaningful uses. Alternatively, another type of ‘reward’ I found to be useful, if not cheap, was the invulnerability period after taking a hit that helps you out when an entire column of platforms stops your progress and vicious hordes of creatures bear down on your location. 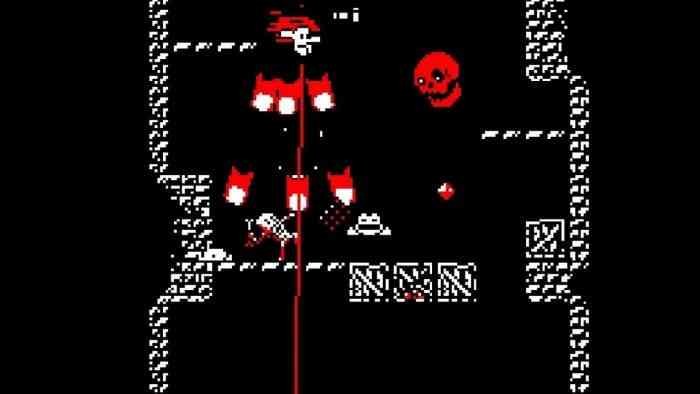 With all the frolicking and anxious leaps to get away from airborne attacks, Downwell surrounds the player with a colorful tune that sounds straight from a Spider-Man game I played on the SNES, in a good way. The art is comparable to games like Spelunky and you can even choose your background overlay on the outskirts of the rectangle sized play area, with my favorite being a repeating image of a frightened frog which is somewhat distracting but very humorous. The soundtrack does its job in that it keeps the player focused and on rhythm with every leap and shot on their descent to the finish line.

Downwell personifies the ‘gameplay is king’ mantra and it backs up its approach with a perfect suite of controls that are predictable and consistent. I never felt cheated and the games brutality showcases its depth and how one can get better with a little more practice. It has a charming score and wonderful visual effects that are appropriate for its genre. Its upgrade system could be filled with more meaningful additions, but the combo system present keeps the fun alive and present some epic moments. Downwell makes sure it delivers on the gameplay front while still impressing in its other aspects. 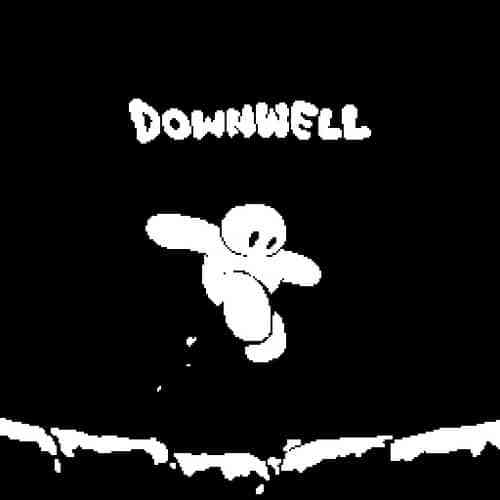