Six months ago Arkane released their stealth action adventure Dishonored on the world. It enjoyed strong sales and critical acclaim, receiving a score of 85 from our own MRBIGCAT along with multiple “Best Action Game” awards. What better way to follow up that success than by unleashing some story expanding DLC? The Knife of Dunwall tells a tale parallel to that of the original game, but does it match its quality?

In The Knife of Dunwall, players take on the role of Daud, the assassin responsible for the death of Empress Jessamine; you know, the bad guy. After murdering the empress Daud becomes overpowered with guilt. After being drawn into the Void, he is visited by the Outsider, who cryptically informs Daud that his “story will end soon”. He is given ‘one last gift’: the name “Delilah”. The cryptic mystery intrigues Daud, and he embarks on a search for Delilah. The hunt leads to a whaling vessel christened Delilah with the aid of Billie Lurk, his second in command. The pair investigates a union dispute embroiled slaughterhouse filled with butchers wielding deadly circular saws, and the mansion of a corrupt lawyer seizing the assets of innocents on their quest. Honestly, I didn’t think the story was all that well explained. I found myself a bit confused at times: not about what I was supposed to be doing, but why. Daud’s sudden motivation to pursue Delilah didn’t feel realistic, and despite several dark soliloquies his character isn’t revealed much. But the gameplay itself is good. Really good.

Much of what MRBIGCAT said about the main game applies here. I give huge kudos to Arkane Studios for building a game that gives you so many options during missions. Lots of games try to give options but generally boil down to a black and white choice. Good vs. evil, light vs. dark. In Knife of Dunwall (and Dishonored in general), there’s a huge grey area. For example, in the first mission you might interrogate, murder, or pack multiple people into shipping crates, and it’s not entirely clear which choice is ‘best’. I love that uncertainty and it gives huge incentive to replay scenarios, especially when your actions directly determine how the content ends (which by the way, is a pretty effective cliffhanger).

If you played through Dishonored, you know exactly how the game plays. You’re given an objective, a big open space to play in, and left to your own devices. They’ve really nailed the feeling of discovery in the DLC, and I felt hugely motivated to check out every nook and cranny. There are myriad options for how you achieve your objectives; you might charge headlong into the fray, or you might play shadow games. Deactivate the force field, or find a way around? The choice is yours. I enjoyed playing stealthily more – Daud’s abilities more suited that approach. The biggest revelation gameplay wise is Blink. Of course, this ability was present in the original game, but there is one game changing difference: when you pull the trigger to activate Blink, time stops. Yes, the moment you stop moving, time stops allowing you to plan things out smoothly. Many times I jumped from a rooftop, stopped time at the peak of my jump, and precisely targeted an adjacent rooftop resulting in a smooth and stylish transition. Escaping from detection and queuing up stealth kills using Blink is a breeze too, but it’s far from the only option Daud has.

Void Gaze shows runes and bone charms nearby and Shadow Kill turns defeated enemies into ash, while the Wrist Crossbow can fire deadly or tranquilizing darts, and Arc Mines electrocute passersby. The options are plentiful for attacking any situation, and scouring the levels for hidden loot gives ample opportunity to practice your craft. Between searching for hidden items and notes, completing side missions, and playing around with Daud’s powers, I spent around 5 hours on The Knife of Dunwall. 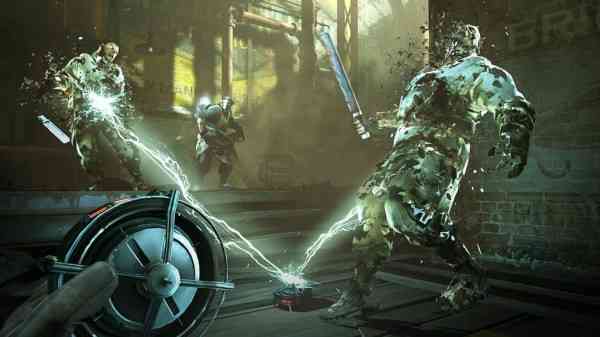 Visually, the game looks good, but is a notch or two below standouts like Far Cry 3. What it lacks technically, it makes up for with very unique cartoon style artistry: it employs an earthy color palate but high contrast, which makes things look almost cel-shaded at times. From an audio standpoint there isn’t really anything to write home about, but the effects and music fill their roles adequately.

The Knife of Dunwall takes an already great game and pushes it in an unexpected direction – playing as the bad guy. Although the story is a little spotty, the sense of openness and discovery are refreshing, especially in what is largely a linear experience. The new and modified abilities keep things feeling fresh, and fans of the main game would be remiss to pass the Knife of Dunwall up. I’m definitely looking forward to continuing Daud’s story.