Desolate Review – Ambitious But a Little Too Desolate

The timing for Desolate’s release is a bit unfortunate, given that it’s on the heels of Fallout 76, so it’s very difficult to play through a game like this without comparing it to any Fallout release. Many current reviews have compared it to S.T.A.L.K.E.R., which is more than fair given the setting and gameplay style. Both S.T.A.L.K.E.R. and Fallout have been compared to one another for years, so it seems only fair to have a franchise looking to step into this genre be compared to the two. Desolate is a release by publisher Nearga, who are nearly impossible to find on the internet, but are backed by indie game publisher HypeTrain Digital. Given the other games in the publisher’s catalog, this one seems to be fairly ambitious.

Desolate takes place in an alternate-universe Soviet Union, on an island called Granichny. In the Prologue, we learn of experiments done on people of the island, and play as a volunteer attempting to break out of the facility to get outside. The Prologue is short and good to run through to get a feel of the gameplay and story, but I found myself frustrated even in the earliest parts of the game because I couldn’t find a damn rock to throw, only to learn that you constantly have rocks equipped as throwing weapons 2 hours later. Once you’re out in the open, though, the quest continues on the story to some extent, though it feels a bit flimsy, which makes it difficult to stay interested in what’s happening.

Desolate’s storytelling, overall, is reminiscent of older Fallout games where you get an up-close of the quest giver’s face as they offer up a little bit of dialogue to set you up for the next objective. The horror, though, is really derivative and predictable. Enemies jump exactly when you expect them to and behavior that is intended to be frightening just comes off as typical.

Each game in Desolate has the option to either go solo or multi-player. Both of the stories are identical with the same loot and, seemingly, same difficulty. You start off in your luxury piano bunker before you’re sent off through a glowing door to the wilderness carrying only a plank with a nail pounded through it. Once out in the wilderness, your first quest comes over the comm. Out in the wilderness, there are wild “Dorgs” (mutant animals), and people who have been affected by the experiments known as “Madmen.” Whether alone or in Multiplayer, everything is the same. You chase down the quest, you kill the things in the path, and collect what you can. It’s all intuitive … until you die. You land back in your bunker or your room off at the Oasis with nothing you carried out with you except a rock, and if you’re lucky, a board with a nail through it. 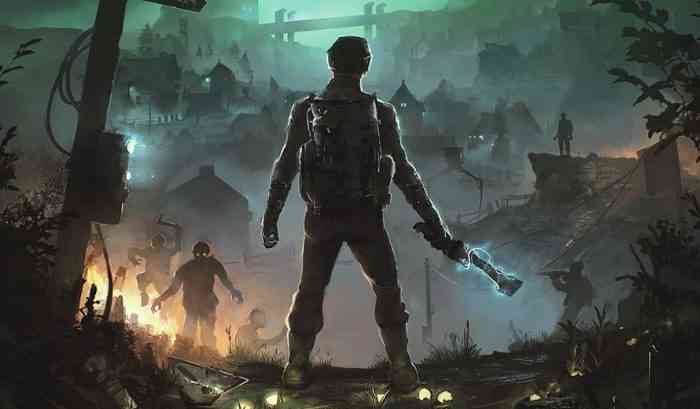 Overall, Desolate is far easier to play in multiplayer, which allowed us to actually progress story. Initially, playing alone, I felt like I was beating my head against a wall that wasn’t moving, but when my friends joined me suddenly the world opened, the map got bigger, and goals were met. The loot, though, seems a bit sparse and I’m not sure if I like that or not. On one hand, it’s a desolate wasteland, but on the other even Fallout has a ton of junk all about the wasteland that is grabbable. It was a bit off-putting to find all sorts of things that could be snagged only to be met with crosshairs telling me I could pick up that ashtray or that bottle.

The controls are intuitive, like slipping into an old shoe. Exactly like Fallout, S.T.A.L.K.E.R. and other games of the genre, Desolate utilizes a standard WASD with mouse-look, aiming, and blocking. Everything runs super smoothly and the nice thing about the UI is it’s even easier to navigate than a standard Pip Boy. Categories are marked with icons and it’s easy to flip pages without too much difficulty.

The crafting is weird. It’s both intuitive and not. Your first intro to the crafting is at the Campfire, where you get the option to cook up some of the stuff you’ve rustled up for dinner, and like everything else, it’s very clean. However, once we got to our home base in Oasis and had access to crafting benches, we found it impossible to figure out how to utilize them. We managed to get the cooking bench to work so we could work with our meat scraps, but at no point would the weapons and armor crafting stations activate for us. Is there any armor in this game? The jury is still out. I’m still wearing the same weird marching band jacket.

The enemies are a bit more reactive than expected. They have a more realistic aggro distance than standard. It is harder to get something chasing you to let up. The NPC experience is really lacking in this realm. NPCs who seemed to be intended to be shopkeepers (for example, a man with meathooks and hanging dead animals) turned out to be nothing. I found myself missing the idle NPC dialogue. When you walk up to them, they offer to trade you or sell you, but there’s no flavor speech, just insta-UI. The only time there was any dialogue was when it was relevant to moving the story along. 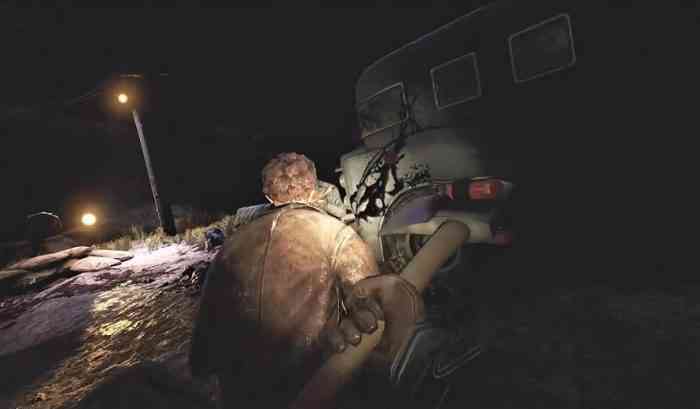 The voice acting that did exist was solid and natural. They clearly put some time into making it flow. Nothing in the audio at any point felt out of place, but given that this game is in the horror genre, they do rely a lot on the use of sound cues for jump scares. It threw me off, felt a bit cheap, and ended up not doing the job because I expected it. For example, there was this abandoned van we ran by and it honked at us suddenly. It felt contrived.

Graphically, the game delivers as far as the environment is concerned. The models of buildings and vehicles are all nice and everything loads easily and smoothly. The UI is clean — pristine even — but where it really could be better is in character design. There is no customization and all players have the same body, face, and clothing throughout. It’d be nice if there was some difference between models, maybe some hired mercenaries or other volunteers out trying to survive.

Desolate definitely has some mega aspirations for such a short game. The developers are clearly acting under the influence of some major titles that have dominated the genre and for a game at a $19.99 price point, it delivers … for now. While we were playing, we talked it over as a group and we think the game is definitely worth the sticker price — we all agreed that there was a really good foundation, but there’s a long way to go. More story, more quests, more character customization, and more rewards appear to be on the horizon. The framework for Desolate is super solid, but it’s time to flesh this out before folks lose interest. Top 5 Games of 2019 That Can Totally Get F**ked
Next My Memory of Us Review – A Heartwarming Story of War and Friendship
Previous Senran Kagura Burst Re:Newal Review – Seams Will Burst