Bleu Cheese has always eluded me. I want to like it, I see the appeal, and people everywhere tell me it’s amazing. I have even tried it a hundred different ways, but every time I go back to it I always ask myself “Why am I eating this, it tastes like a sweaty feet?” Some games are kind of like that too…minus the sweaty foot part.  I was assigned review duties for Deception IV: Blood Ties and the absolute truth of it is that I tried my hardest to like this game, perhaps the hardest I’ve ever tried to like a game. Over the course of several days and several play sessions I would approach it again with fresh eyes, a fresh mind, and a renewed sense of purpose, but in the end, I had to admit defeat. I simply could not like it as much as I hoped. My tenacity wouldn’t allow for it and it’s a damned shame, because the idea for the game is bloody cool.

Deception IV is a tough cookie to classify. It’s sort of an action/strategy/RPG with puzzle-like elements. The concept alone is really where this game shines. You are a demon and you have demon helpers. Waves of soldiers come after you in an effort to bring your evil to an end. Throughout the course of the game you are given various battlefields to “play around” in, and by “play” I mean you place horribly twisted and gruesome traps for unsuspecting soldiers to happen upon and meet their ultimate demise. Use of these traps makes up Deception IV’s entire combat system. 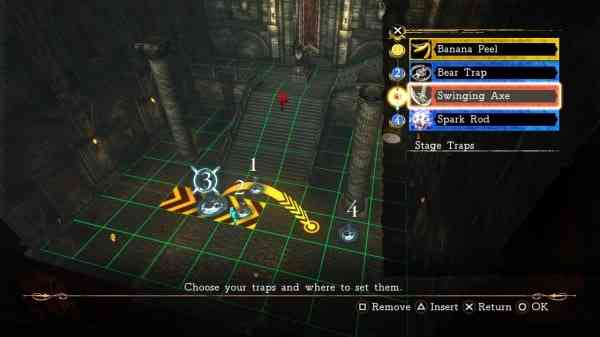 Not unlike any other strategy or tactical RPG, Deception IV relies entirely on a grid. While this isn’t apparent at a first glance, you have to open a sort of grid “mode” which will change your vantage point from third-person view to an overhead view. It’s in this grid mode where all the fun happens. As previously mentioned, the combat in Deception IV is entirely based on traps, as there is no physical combat in the traditional sense. Traps are broken up into three categories; Elaborate, Sadistic, and Humiliating, and each of these categories earns experience individually according to use and effectiveness in each mission. Traps can be used to string together combos for killing enemies faster. For example, you can use a springboard to knock somebody into a swinging blade which will in turn knock them under a falling boulder. It’s encouraged that you put together as many combos as possible as this will earn you more experience quickly and help you clear missions faster. While initially quite interesting and fun, it can become stale and draining very fast; the very same things that were fun in the beginning become the things that bother you later on. Simply put, the game never evolves; instead it devolves into repetition and monotony.

Trap placement is only half of the literal battle in Deception IV, the other half is execution (pun totally intended.). Once all of your traps are placed they must be activated. When your target walks over the intended trap a simple press of a button will launch them into impending doom. When it works it’s quite entertaining to watch and coordinate, but if you miss you’ll find yourself running in circles waiting for a perfect opportunity again. Traps employ a cool down system. Once you use a trap it cannot be used again as time has to reset. This is a tried and true system that is used for balance in most anything, but in this particular case it merely feels like a punishment for bad timing; something you’ll experience in spades when you first start out. A lot of the traps feel a tad sluggish and require a good deal of practice to use effectively. I quickly found myself falling back to a small handful of traps that I knew would be effective, rather than experiment with others where the timing was different. Drop traps particularly seemed plagued by this. Most enemies run much faster than a trap falls, causing them to easily run right under your trap without a scratch. Moreover, many soldiers have unexplained trap immunities, which leads a frustrating trial and error style of gameplay.

The AI in general felt a bit off. Some AI would move in seemingly unpredictable ways, making trap placement difficult while others would be constantly sprinting towards you, making trap timing absurdly difficult. The biggest offenders of this were boss characters. Most of them had magic “trap vision”, which allowed for them to gracefully dance around placed traps. And in all cases when you were up against one they had some way to heal themselves if you didn’t kill them fast enough. This resulted in me once again falling back on safe trap combos that did the most damage in the least amount of time, which in turn lent itself to dry repetition. 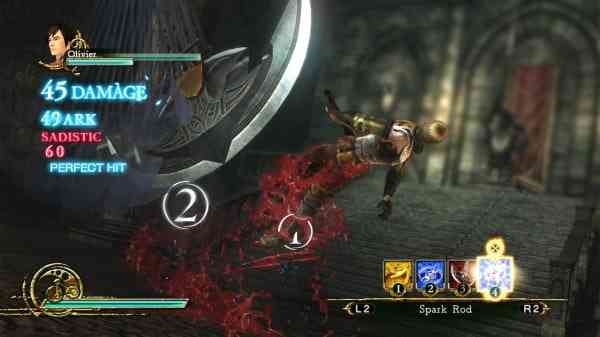 Gameplay aside, your first waltz into Deception IV places you in a dusty old castle with various dusty old castle themed rooms that you can run to at any point. Unfortunately, it isn’t a good first impression. While the scope and sense of freedom is excellent, the visuals themselves are dated. In my many long years of gaming rarely am I the one that cries about graphics, but Deception IV broke me. While a higher degree of polish and care was taken with the character models I essentially felt like I was playing an up-rezzed PS2 game. Most of the environments felt dark and blocky and the particle effects on things such a lava and lightning were very two-dimensional and flat. Textures on the other hand did have some redeeming qualities; more specifically the floors come to mind.  Maybe the fact that this game is available on the PS Vita as well, but I have seen PS Vita games that look better.

The most impressive part about the character design for Deception IV isn’t actually the protagonists, but the villains. Altogether the set of four female leads felt like fan service. While some of them had a better design than others, and more clothes to boot, none of them really felt like a likeable character. The baddies however seemed to have a lot more love put into them. There were times where I actually felt bad killing them. Each and every soldier has a unique design, dialogue, and back story. While playing it sometimes becomes apparent that certain soldiers are connected to one another through family, friendship or marriage. It was a little heart breaking when you’d kill somebody and they’d cry out for somebody who you’d probably already killed too. Turns out I’m not very good at being a demon.

While Deception IV: Blood Ties may be a little rough around the edges, and maybe a little rough in the middle, it is far from an abomination. There’s actually a lot of fun to be had with this game, assuming you can be patient and enjoy experimentation. With that in mind, don’t play it for the story, don’t play it for visuals, play it for the potential. Deception IV is a game that will give you back exactly what you put into it. If you show it some love, it will most likely show you some love back. 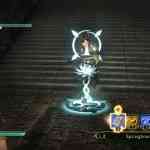 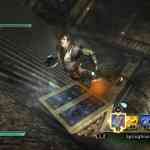 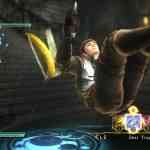 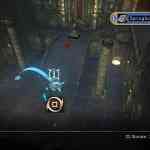 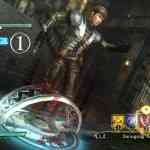 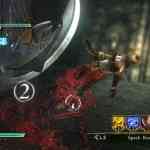 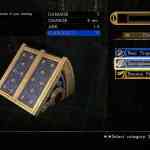 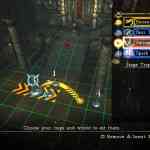 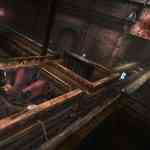 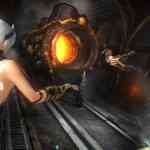 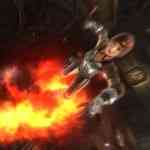 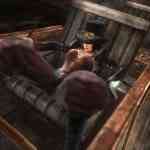 Next GAEMS Vanguard Black Review – Taking Your Videogame Console Anywhere is a Reality.
Previous Ragnarok Odyssey ACE (PS3) Review – An Improvement, but Still Just Too Much of the Same