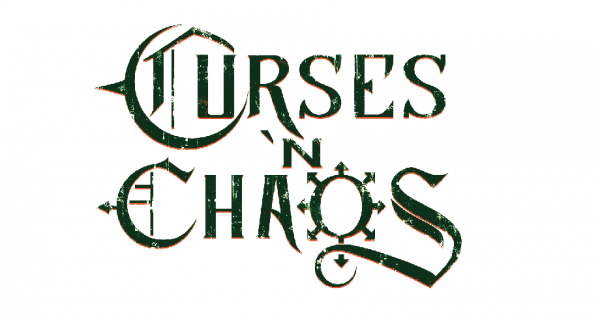 In Curses ‘n Chaos, you must fight through the hordes who seek to extinguish your life, thanks to a curse that was placed on the protagonists, Lea and Leo. Fortunately, they aren’t alone. In Tribute Games’ latest endeavour, they opted for a different take on the couch co-op/beat-em-up titles many of us hold in such high regard. You’ll battle plenty of enemies across a variety of locations, but you’re confined to one screen. Thankfully, you have the aid of a plucky Alchemist known as Allison and her companion, Owliver, who will happily pick up a spare item for you to store for later. These items range from simple weapons and healing items, but you can craft them into much more potent tools, even using the forces of nature to your advantage. As you battle across various stages and slay giant bosses, you near your goal of finding the components needed for making the Elixir of Life, which can break any curse, especially the one laid upon our hero and heroine.  Well-crafted chiptunes, responsive gameplay, and some interesting mechanics are slightly marred by a cluttered HUD and a bit too much chaos, however. There are a few gripes I have with the game that prevent it from being that truly addictive title that Tribute set out to achieve.

The game is legitimately difficult, but there are a few enemies who err on the side of unfair, thanks to their behaviors. Luckily, a number of the items help to even the odds to an extent. Owliver serves as a sort of pocket, where you can stash one item for later use, be it a healing item, a point boosting/multiplier boosting consumable, or even an offensive weapon. It would have been nice if there was a way for Owliver to take said item and add it to a stash. With how important crafting appears to be in the game, it would be a lot more ideal to have Owliver serve as a way to scoop up and store items for later use in later levels. 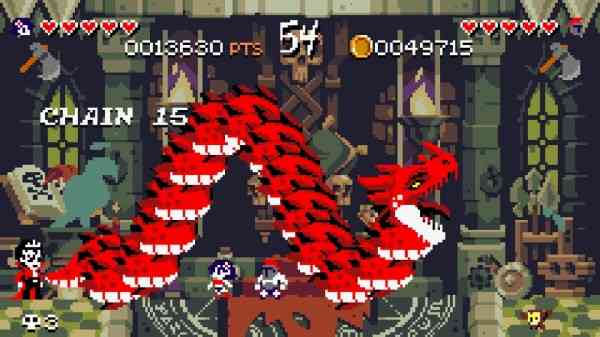 The game’s name certainly is accurate, as there is plenty going on within your screen. As you build higher and higher chains, you start to get better drops from enemies. The measly coins that only add a little to your savings eventually turn into money bags, and even gems, should you remain unscathed, and it encourages a level of focus that one would typically hold for more mechanically “busy” titles, such as one of the Souls’ series entries. Once you get hit, your chain is broken, and you must begin gathering it again from square one, unless you happened upon one of the multiplier boosting clover items. If you want to start from the beginning though, as common with games focused on high scores, you’ll need to quit, launch the game again, then start over. It’s an incredibly tedious process that kills the urge to replay levels right away, especially with some achievements requiring a very high chain, or beating a level without getting hit. I found myself plowing through some of the later levels, simply for the sake of completion, rather than replay value.

“The game’s name certainly is accurate, as there is plenty going on within your screen.”

This was my primary issue with the title. The game itself plays quite well, and the enemies are varied enough that the game keeps you on your toes. The backdrops are all visually pleasing, and vary in nature. The bosses are all unique, and have their own patterns to recognize, and they are well-designed overall. Tough, yet not impossible. They feel like boss battles. There are so many quality pieces in place, yet it still feels like it could be something more. The tedious means of going to start a level over (why is there not a restart option in the pause menu?) certainly killed the incentive of going back to try and top scores, or grind out items needed for crafting. A few AI behaviours had me a little annoyed as well, as the basic frog enemies liked to jump in from beyond the screen, and there were a few times where a high chain was killed thanks to not seeing them coming. Thankfully, one item, the clover, serves as permanent boost to your multiplier (although I was unsure if this was affected by death or not.) A clearer indication of the current multiplier could serve useful though, as the HUD is a bit messy as a whole. A simple number multiplier akin to Hotline Miami could serve just as well, and possible take up less space too!

All in all, my real issue with this game is that it feels like there was enough put in place to really make something fun. Despite the quality of each piece, and the unique take on the beat-em up genre, I almost feel like the game could have functioned much better as a side-scrolling title. Tribute Games has proven they handle this formula, as Mercenary Kings was quite enjoyable to play. Naturally, it’s not my place to try and claim this would be easy to implement, but having a couch co-op title where you battle through various levels to tackle the big boss at the end is a proven formula. It’s something we’ve enjoyed doing ever since we popped in titles like Streets of Rage. Even recent titles like Double Dragon Neon show that this genre still holds up, and while I hadn’t experienced any of the online functionality, I’m hoping that having a second pair of hands to fight could make some of the game a little less frustrating to deal with.

Next Kyn Review for PC – All The Issues Almost Had Us Notifying The Next of Kin
Previous Zombi Review – Without The Wii U Gamepad, This Zombie Game Stands As Unremarkable