Wow, there’s nothing quite like CreatorCrate. I mean sure, I could use familiar words to describe it, words like, “procedurally generated sci-fi roguelite platformer with crafting elements,” but that doesn’t really convey what the game is like. In a crowded indie PC gaming world, that’s no small feat. If you are looking for something fresh, something not quite like anything you’ve tried before, maybe you’ll be willing to forgive some messiness. Because CreatorCrate will stimulate a whole new part of your brain.

To be clear, CreatorCrate is all those things. You’ll jump, and try multiple runs through a deadly maze. You will break stuff down and build new tools for your journey. But I feel weird putting it into a “Metroidvania” box or something like that. Part of it is because of how well the gameplay and story are integrated. In CreatorCrate, you play as um, well, CreatorCrate. That’s a new type of robotic 3D printer that’s meant to be a home appliance, but you’ve got other plans. 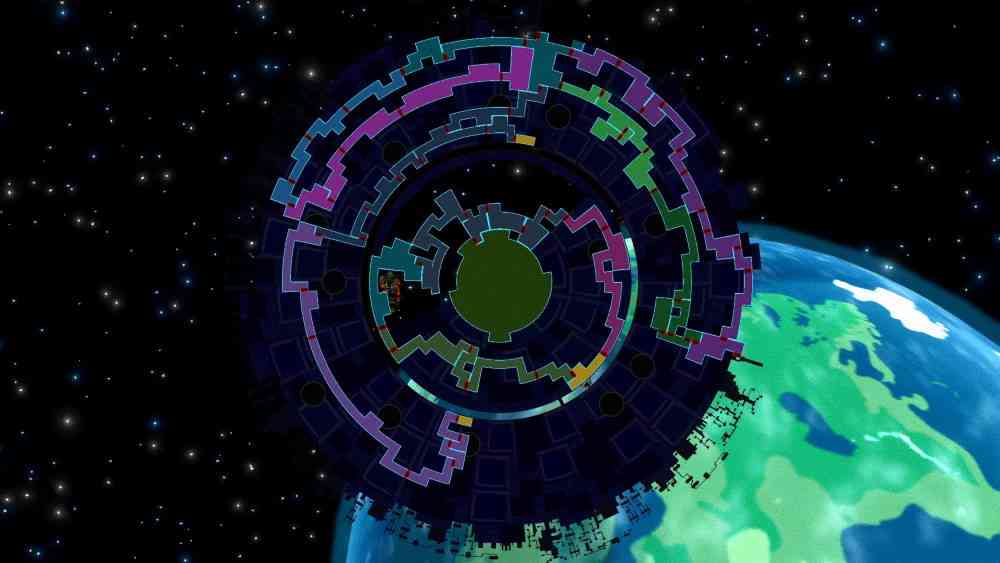 Those plans revolve around escape. You are trying to get off of a big wheel-shaped space station. The station itself is probably my favorite thing in the game, it’s an evocative setting that belongs right up there with the most beloved Castlevania castles. That’s mostly due to the map; when you hit the map button the game zooms out and the graphics get simpler and simpler until you are looking at a stripped down version of the game itself. The effect really stabs at something specific in your brain. If you’re the kind of nerd who lives for the maps in fantasy books, I think you know what I am talking about.

The moving and jumping controls feel pretty slick. It’s a bit floatier than I would like, but once I got into the rhythm of things I learned to appreciate that, especially once the game starts playing with gravity. There are lots of mechanics around grabbing things, throwing them, swinging on poles… I sucked at all of this, but it’s a good system. There’s just the right amount of chaos and control. You can swing around wildly, or you can get really good and nail the timing. Either way the game is fun, though you’re only going to get to the end with some mad skills.

So, What Does the Crate Create?

Of course, none of that really gets into the crafting mechanics. These are much-ballyhooed features that are prominently mentioned in the marketing and in the game itself. And they are… fine. They are cool! Creative. But I found myself more interested in the grabbing and throwing than I was in the building. At the start you have three slots to memorize recipes and you can break stuff down into its core matter to build something out of your recipes. So you can melt down a couch and make a new couch. Or you can turn that couch’s matter into a gun. Or a mannequin. Or a ladder. 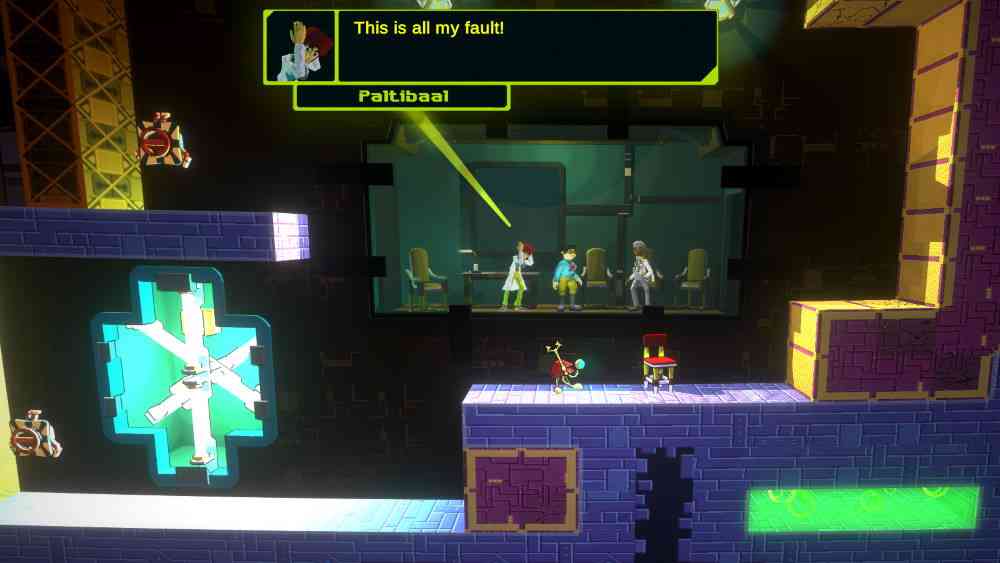 The thing is, a lot of the different objects are functionally the same. You will need stuff to climb on top of, or to use as a shield. In another game, one with meticulously designed puzzles, I could see the crafting system being very exciting. In its current state, it’s a cool idea, and one that ties into the story of the game in a pretty pleasing way. Ultimately, it feels more similar to The Last of Us than Zelda. The tension comes from the high levels of danger- will you be able to craft what you need on the fly, while ducking danger?

CreatorCrate didn’t hook me as much as I wanted it to. I think the combination of the challenging gameplay, the wry sense of humor, and the uneven mechanics held me back from getting really good. Or maybe I’m just a talentless hack? Whatever the case, I played CreatorCrate for a good amount of time, but I don’t think I got anywhere close to the end. I had fun with it. I mostly caused a lot of chaos and tried to jump around as fast as I could. I got chased, I got shot down. I never really improved. But you know what? I also have never gotten good at Rocket League and that game is a blast. Sometimes there’s joy to be found in meaningless chaos.

I don’t think that CreatorCrate is striving for meaningless chaos though. I feel like it set out to be a smart, tricky game. And it is, to a point. But maybe it’s not as smart as it thinks it is? Is that a bad thing? I’m not sure. I can’t claim that the game accomplishes all its goals. But I had fun with it. And you, the person reading this review, might even have the skills you need to get good at it. I can’t imagine how much fun you’d have with it then; my guess would be oodles.