I’m wandering across the desert with a shoddy pickaxe in hand, searching desperately for any sign of coal — a resource I have yet to discover in the world thus far. For as far as my eye can see, the land is devoid of any human life or civilization. In every direction, there are chiseled, orange canyons and fantastic rock formations in the distance that tower over the landscape. I continue running across the plateau, and then, I see it: a massive pit in the middle of the desert, where intricate stone pillars line the sides of the hole, reaching down hundreds and hundreds of feet. I peer over the edge to look inside; curious because I’ve never come across anything like this up until this point. I glitch out and suddenly find myself plummeting to the bottom, where, out of some miracle of God, I manage to survive the falling damage. Just as I am about to celebrate this victory, I am struck by a high-level skeleton who inevitably kills me, and I am spawned back to my home base with absolutely none of my belongings and not a penny to my name. All I wanted was some goddamn coal. Conan Exiles…

Welcome to Conan Exiles: an unforgiving, challenging and brutal experience that deservedly carves its name high on the totem pole of the survival/crafting genre. The official game finally launched last week for PC, PS4 and Xbox One (sorry, Switch users) after Funcom’s early access release over a year ago, and while significant improvements have been made to the game, it still has no shortage of bugs and flaws. Set in a dynamic and spectacular Conan the Barbarian universe with boundless building capabilities, the seemingly endless crafting list and multiplayer aspects are enough to keep you distracted from the prevalent kinks that, if ironed out, could certainly allow this game to grow into one of the most fantastic survival games on the market. Conan Exiles stays true to both the original pulp fiction and the survival genre in its hostile, merciless delivery that pits nearly everything and everyone against the player. From the start, you are left to die on a cross in the middle of the desert for crimes unbeknownst to the player, and you must subsist by using the environment around you to clothe, feed and protect yourself.

Your character’s appearance is fairly customizable, with a good amount of race, religion and facial options that give a satisfying amount of choices without being overwhelming. Most of the sliders are applied to the facial features, with body parts and limb customization being cast aside entirely — that is, of course, except for the adjustable breast and “endowment” sliders. Don’t expect to see players who look wildly unique from one another: due to the limits on customization, mostly everyone will look the same in age and physique, with some mild variation in hair and skin color. If you’re running around the map on a server that allows for full or partial nudity, be prepared to see lots of busty ladies and dudes letting it all hang out — and be ready to gawk over how realistic they move and appear.

Conan Exiles is meant to be a savage and unyielding experience. Unless you are playing on a boosted server that adds large multipliers to your XP and resource gathering, don’t expect this game to give you any breaks: aside from a few references in the corner of the screen that explain the basic controls and some suggestions for actions your character should try, it will not tell you where to go, what to do, or even what direction you are moving in. If you are trying to make it to a certain location on the map, you will have no waypoint or compass to reference, and will have to continuously stop and open up the map to see if you are headed the right way. If you want to craft anything other than the base recipes, you will have to level up and spend knowledge points to unlock new formulas, and then grind your ass off to construct it.

Not only will you have to figure out what to do amidst a questless and unhampered land, but you will have to protect yourself from thirst, hunger, weather and enemies. Even while you are offline you have the ability to starve to death or be killed by other players if you are out in the open, and may log back in to find yourself in a starting area or at your last spawn point; naked and unarmed once again. With options for PVP, PVE and single-player mode, the amount of threat you receive from other players is up to you, but trust me that you will have just as much of a challenge facing the environment and NPCs as you do facing other players — the only trade-off is that you are less likely to have your items looted when killed. 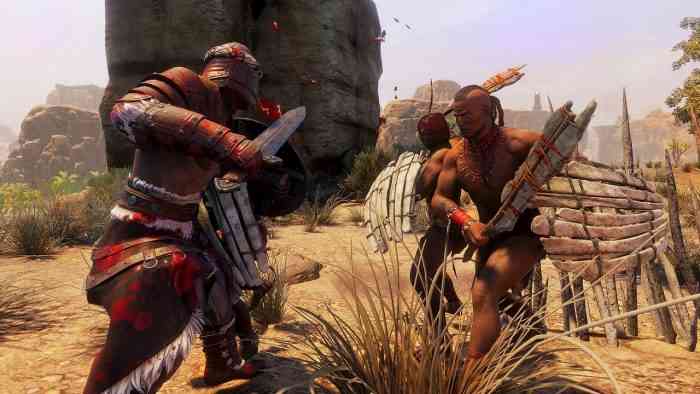 By far, the most impressive and distinguishing feature of Conan Exiles is the amazing world that looks stunning even when running at lower resolutions. The map is vast and diverse, with rich biomes offering everything from blistering, frozen tundras to ashen lava lands and lush jungles. Each region has unique climates and enemies that pose a different level of difficulty that you will need to prepare for before entering. Sandstorms and blizzards are all too common, and without your own base and sufficient gear you will not survive. Don’t expect to run through the map and explore the entire thing within your first handful of hours: if the abundance of pugnacious enemies don’t get you first, the severe weather will.

The beauty of the game is that almost anything in the environment except for the major features can be altered and interacted with. If you want to build an elaborate medieval fortress on an island where you torture NPCs and force them to serve you, you can. If you want to climb up the tallest tree in sight and set up a functional treehouse village, you can. The freedom to discover and build whatever you want is an exciting and challenging exercise of creativity that gives the game the capacity to entertain and keep you busy for hundreds of hours to come.

While the successes of the game in achieving a gorgeous, immersive and overall well-executed new survival title cannot be diminished, it is impossible to ignore the pervasive flaws and frustrations. The game is buggy, with undeniably poor AI in addition to frequent glitches and freezes. Flighty animals often get stuck against rocks and other obstructions and will run in place forever, while other creatures and enemies are unintelligent and slow to register fast dodges and movements. The combat is simple yet fussy with its targeting system: locking on to enemies limits the periphery and makes it difficult to see any other assailants, but letting the camera move freely means that half the time you will swing and miss due to the sensitive focal point.

In certain respects, there are odd inconsistencies with the priorities of the developers. For example, the hair of the players throughout the game is stiff and unrealistic, while the breasts and genitalia seem to breathe and sway with unprecedented detail. Sensual dancers throughout the game have perfect, realistic fluidity in their motions, yet the basic endeavor of having NPCs move their mouths or perform any animations as you speak with them has been completely blown over.

Not only is there an extensive amount of bugs and disappointing animations with NPCs, but there are other frustrations and areas where the game falls short. When choosing a server to play on, there is no way to see which server you’ve used before, meaning with every new server you play you must create a brand new character and start from square one. This can be frustrating if the server crashes or bugs out (an event I witnessed much more than once) or if you simply forgot to mark your server before selecting it for the first time. Another basic feature that was oddly forgotten is the simple ability to exit or backpedal out of character creation once you have selected a server without having to quit the application entirely. 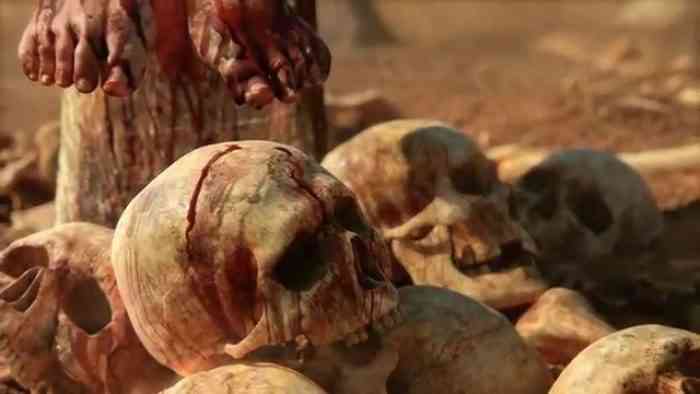 While certain elements have been successfully mapped to fit console play such as the convenient radial menus used for equipping and placing items, other mechanics are strange and confusing. Something as simple as cooking meat over a fire is made over-complicated by first failing to provide any tutorial whatsoever and then by having an inconspicuous button in the corner that says “Toggle On/Off” instead of just “Craft” or “Cook”. Player inventories and crafting menus are also somewhat cumbersome to flip through, and the more recipes you unlock the more tiring it is to constantly open up and cycle through the menu to make one thing. These elements are not dealbreakers in any way, but rather aspects that could have been created differently to keep the player from spending the majority of their time inside of a menu or dicking around just to figure out basic mechanics.

Much of the landscape in Conan Exiles feels empty, as raw nature is much more ubiquitous than cities or encampments. The cities, ruins, and dungeons that do exist are impressive and grandiose and are made to be raided by groups of people. That being said, most of the gameplay is infinitely more fun when played alongside friends, and much of the appeal of Conan is the multiplayer RPG aspects of it. This, however, brings up another important flaw: the most disappointing shortcoming of the game is that it is incredibly hard to meet allies online. There is no global text or mic chat on Xbox One or PS4; an element that many players want and are vexed by. Given that there are only 40 players to a server and the map is so large, it is easy to go hours and hours without seeing another person.

This means that not only does the experience feel lonely at times, but that you will have to work extra hard as a solo adventurer to protect your belongings from the unsympathetic player clans that roam the world looking for little guys to pick on. Certain boss battles and dungeons can only be explored once you have insanely powerful gear if you are going at it alone, and you’d better not expect these crafting echelons to come easily.

Conan Exiles offers hundreds of hours worth of addicting gameplay for those who love the grind and tediousness of crafting combined with the challenge of survival. The play modes are so flexible that anyone, regardless of experience with the genre, can jump in and get a fair start. It is not discouraging in its difficulty, but rather it requires the persistent work and time that make it worth playing in the first place. Despite the forgivable weaknesses of its current state, Conan Exiles has incredible potential to grow and improve with the application of a few patches and refinements. Judging by their social media and blog presence, it seems the developers are dedicated to listening to the community and adding improvements to the game.

For those who are inexperienced with open world survival and crafting but are attracted to the gorgeous look of Conan Exiles, I would just advise that you know what you are getting into. Do not expect an evident or strong storyline in the first number of hours, or to be spoon-fed how to play the game through tutorials or directions. Prepare to die in the beginning, a lot. And most of all, prepare to explore a beautiful and diverse landscape with limitless things to discover and create, and to have a lot of fun doing it. 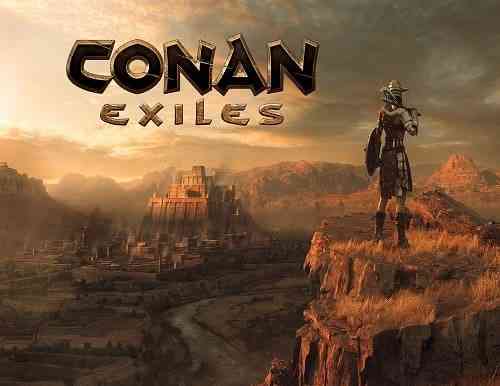 The Callisto Protocol Heads To PC and Consoles In Early December