ChromaGun Review – A Portal of a Different Color

ChromaGun is a first-person puzzle game that takes the simple act of color mixing and turns it into a punishing series of trials. The tone and aesthetic approach Portal levels, while the puzzles themselves are easily a match for Valve’s infamous genre progenitor. Even if you’ve forgotten your primary school lessons on colors and their origins, this game is more than happy to refresh your memory.

You play… yourself, I think. Responding to a series of advertisements seeking test subjects, you wander into the Chromatec office and get started. It’s actually more fleshed-out than most puzzle game stories, in that there is a story at all. The trailer embedded above does an excellent job of encapsulating the narrative tone of the game. The actual dialogue and/or flavor text is more thinly spread once you fire it up, but this supports the minimalist vibe given off by the aesthetic. Again, the Portal comparisons are inevitable, but I quickly cast these aside as I got down to business.

“My eventual success never came with any euphoric glee, just a feverish need to press ahead.”

Like those childhood lessons about colors, the first batch of levels are pretty basic. I spent several stages getting familiar with the gun and what it does, namely shooting paint blobs. As with any good puzzle game, your abilities are extremely limited. There’s even an achievement (on the PS4 version at least) for trying the laughably ineffective jump button. The real innovative variety is baked into the stages themselves. You work to manipulate worker droids into positions over switches, thus allowing you to exit the stage. The droids will automatically float towards walls that are the same color as them. Simple, right? 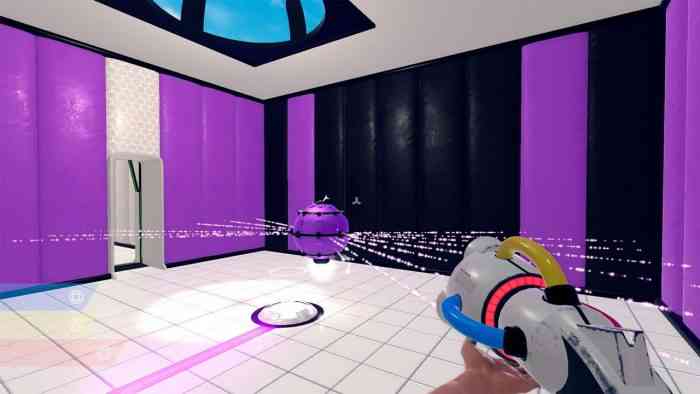 Over time, new obstacles are introduced. You’ve got your scarier droids, the kind all lined with spikes and ready to bludgeon you to death. Then there’s the shields, the floor traps and the esoteric mazes of locked doors. Things quickly go from childish and simple to brain-melting. At least, it feels quick. Several hours blew by while I smashed my head against these puzzles. My eventual success never came with any euphoric glee, just a feverish need to press ahead. Because these are first-person puzzles, you’re never sure the stage is done until you see the stairs behind that last door. In the beginning, your progress through the stages feels fairly relaxed. Once you’re introduced to the spiky seeker droids, the stakes are raised significantly.

Thankfully, the mechanics involved in completing each stage feel pretty intuitive. I was never lost as to what my job was, or whether or not something I tried was going to work. The rules of the world are established quickly and easily. One of the ways the game does this is with the graphics. The bare walls and floors make swathes of color stick out like beacons. Your color mixing produces clean, gorgeous results that feel like they should be on the set of some ultra-modern music video. I wish there was just a space wherein you could mess with the gun, producing dazzling palettes that shine crazy bright on those industrial surfaces. Everything makes enough sense that I didn’t get really stuck until halfway through the game. Even then, it was more the result of my own mental degradation after hours of playing, rather than an issue with the game.

“Your color mixing produces clean, gorgeous results that feel like they should be on the set of some ultra-modern music video.”

I wish the first chapter moved a bit faster. If tutorials feel long, it’s because you’ve grasped the lessons faster than the developers anticipated. In this case, it felt like the teaching section could have been cut in half. I’d love to chalk this up to my superior intellect, but my eventual (constant) stumbling doesn’t support this theory. I also wanted more out of the narrative elements sprinkled throughout the game. While that trailer was pretty snappy, the same intercom overlord loses a lot of his panache once he’s introduced to the actual game. His lines feel stretched out and exhausted like he’s spoken them countless times already. ChromaGun isn’t shy about comparisons to the Portal series, but this confidence doesn’t extend to the spoken dialogue. The other areas of the game better capture that feeling, but it’s still distracting to see this one shortcoming in action.

That comparison between ChromaGun and Portal has come up a lot, but the game doesn’t suffer for it. In fact, this brazen admission of influence written all over the game works to its benefit. Rather than sneak these things and hope you don’t notice, it’s all refreshingly forthcoming. And why not? Portal re-wrote the book on first-person puzzle games, it’s only fair that the torch be passed on in a transparent fashion. Pacing for these games is such a delicate line to lay down. If it’s too slow, they feel easy and dull. Too fast and the game feels brutally unfair. ChromaGun slips from one side to the other somewhere between chapters two and three. But it looks great and feels natural to control, so it didn’t bug me as much. I’d love an HP bar so I know how many more mistakes I can make before I bite the dust. That and an empty room to bring in this gun and go crazy, a sort of coloring book you can walk around in. If you’ve got an appetite for puzzle games and fond memories of Portal, you’d do well to give ChromaGun a good look.