Catan for Switch is Catan for Switch. You likely are familiar with the endlessly popular Euro-game, which in recent years is probably played almost as often as family mainstays like Monopoly. Catan is complex, but not overly so. There are random elements, but much more of the game is a matter of skill and experience. With enough analysis, it can be strategized for and optimized as much as chess or poker. And it looks great on Switch.

The board game Catan was designed by Klaus Teuber and released in Germany in 1995. Within a few years, it became the gold standard for this sort of point scoring tabletop game. Then came the expansions, and the remixes, and the whole Catan brand. Sheep were traded for wood, and nerdy teens everywhere snickered. The Big Bang Theory joked about it. Catan became omnipresent.

If I had to pick the ideal way to play Catan, it would probably be as a teenager with a bunch of other teenagers at 2:00 AM after a lame party has fizzled out. My point being, Catan is a social game, a great opportunity to goof around with some friends. But that doesn’t mean the solo Catan experience is invalid. Chess may be ideally played with an old man in a city park, but that doesn’t mean I haven’t had a good time playing chess on my phone. This makes the Switch a uniquely excellent system for a Catan game. Because I don’t ever see myself loading Catan up on my TV.

Great Adaptation of the Classic Board Game

It looks good, as good as a board game has ever looked when adapted into a video game. The art style is pleasantly cartoony and captures the nebulous location of the Catan island, which could be anywhere in the world. The music is pleasant but unobtrusively drifts into the background. The haptic feedback of the controller vibration is a nice touch and prevents you from zoning out and missing a crucial piece of information. 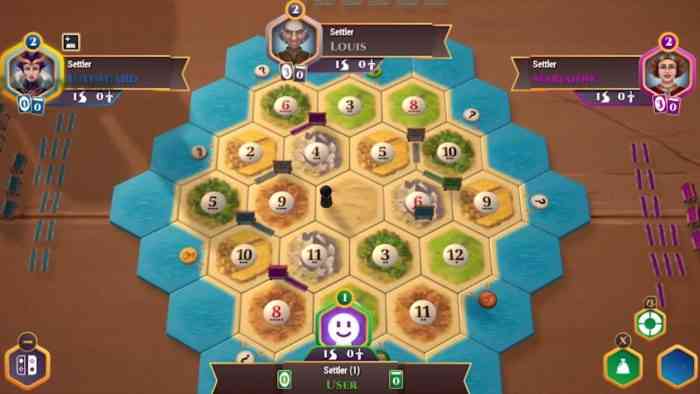 This game though is meant to be played in the handheld mode. It’s great while curling up in a comfy chair with a beloved pet, or playing with the lights low and the rain tapping against the windows. I’m going to play it on a long bus ride across the country, and I’ll probably bust it out when my family is watching some sports game I don’t care about. Some people enjoy unwinding with hundreds of games of Candy Crush but for my money, Catan is better.

The adaptation of the game itself is fortunately very good. The controls take a little bit of getting used to, but they are intelligently designed. Once you figure out which buttons you need to hold, which you need to tap, and that trading with the bank requires two button pushes (first to get the regular trade screen, then another to get to the bank screen) you’ll be in business. The computer plays intelligently, but not mechanically. Sometimes, you’ll catch them making a bad trade, or building a settlement somewhere less than ideal, but that’s great. I don’t want to play Catan against a mechanically perfect computer. I like how much personality your digital opponents are given.

There’s also a multiplayer mode, though even hot seat can’t compete with sitting around a table with pieces of cardboard. The best part of the game is, for my money, the campaign mode. Yes, a campaign mode. The story is barely there, but really it’s an excuse for different novelty boards. Here’s one where the ore is poorly situated, and here’s one where resources are clustered together, making the center of the map a hotspot of conflict. Each match plays like a Catan puzzle, while still feeling like a legitimate regular game, albeit one with a very unlikely configuration. 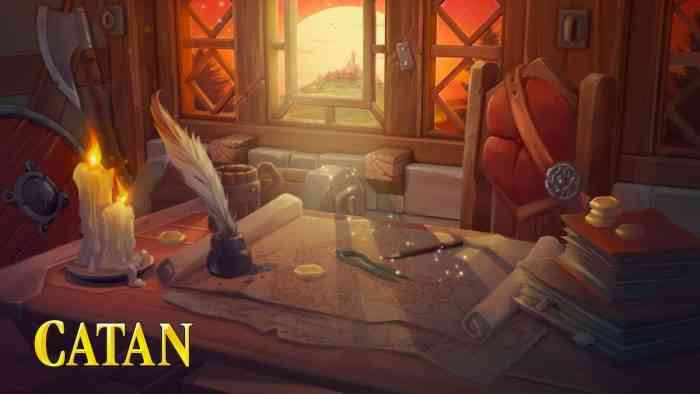 Once you clear the first campaign island, you’ll realize that there’s more to the world. You get to play the expansions with all the alternate rules. First comes Seafarers, and eventually, Cities and Knights. This slowly ratchets up the complexity while staying true to the authentic Catan experience. It’s not a ton of content, but it’s enough that I’ll be eager to clear 100% of the levels, and I’ll happily purchase Traders & Barbarians, Explorers & Pirates, and any other expansion that makes it into the game campaign as an island.

Catan on Switch is serene but never boring. It’s not a pulse-pounding action thriller, but it asks for a lot of thought. You will strategize, you will win, and sometimes you will lose. But the music will continue to gently encourage you, the cartoon opponents are just begging to be defeated, and there are still so many islands to clear. I don’t know how glossy you can make a game like this, but I’m happy to report that you don’t have to. An attractive package and a clear interface are the only reminders we need- Catan is a classic and being able to play it on the go is a gift. 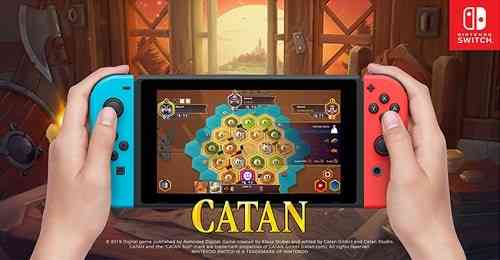 Tony Hawk’s Pro Skater 1 and 2 Officially Brings Fun to the Switch
Next Lovely Planet 2: April Skies Review – As Lovely As Ever Before
Previous Citizens of Space Review – One Small Step…