I’ve fallen asleep during very few games in my day. I’ve deemed even fewer games unplayable entirely. Brothers: A Tale of Two Sons merited both of these responses from me, and given the enormous hype and acclaim this game has received over the past few years since its original release back in 2013, I was completely blindsided by its disappointing co-op adaptation for the Nintendo Switch and its underwhelming single player campaign.

The simple story of Brothers: A Tale of Two Sons is set up in less than two minutes at the very start of the game, then effectively ignored for the remainder. The game begins with the younger of the two brothers standing next to a gravestone, flashing back to the day his mother drowned off the side of a boat in the middle of the ocean. The flashback is interrupted by the collapse of his father, who is being supported by his older brother and must now be transported to safety. The two brothers carry their father away in a wagon to seek help from a healer, and are presented with a scroll that we can only assume from context is a list of items they must fetch or a place they must go and visit for help. The premise is conveyed through gestures and grunts in an imaginary language at the beginning of the game, and once you jump into the hands-on gameplay you don’t see much of this story ever again.

Brothers was initially released as a single player experience but has just been ported to the Nintendo Switch with a brand new co-op mode. In single player, the idea behind the gameplay is that each of your hands controls a different brother and you must use serious coordination to make them move and work together. There are only two real controls; an action button mapped to either ZR or ZL and the joysticks on both sides that control each brothers’ individual movements.

Though the concept of controlling two brothers and having them perform in harmony seems cool at first, it grows old quickly, as the game tends to rely on the challenges caused by coordinating two different brothers as the only thing it needs to maintain your interest. Often, the “puzzles” the game presents are little more than holding down two triggers at the same time and moving the brothers at a snail’s pace as they drag an object around, with no overthinking required to get through the levels. The most challenging puzzle in the game involved each player picking up one side of a log and moving it around like a piece of furniture, which should be a tell for how ridiculously easy the rest of the puzzles were. Brothers wants you to have to work through the difficulty of coordinating the two characters, but it doesn’t want to provide any exterior complications or true obstacles. It simply wants to be tedious and hopes that’s enough to keep you entertained.

Originally, the game director told Game Informer that he would rather cut his hands than make Brothers a co-op game because it was very important to him that one player control both brothers, and after seeing the game through in co-op mode, it’s easy to echo this sentiment. I was genuinely looking forward to trying out this title with a buddy since the days of couch co-op have more or less been laid to rest, but having each player control their own brother completely took away the only challenge the game once offered. 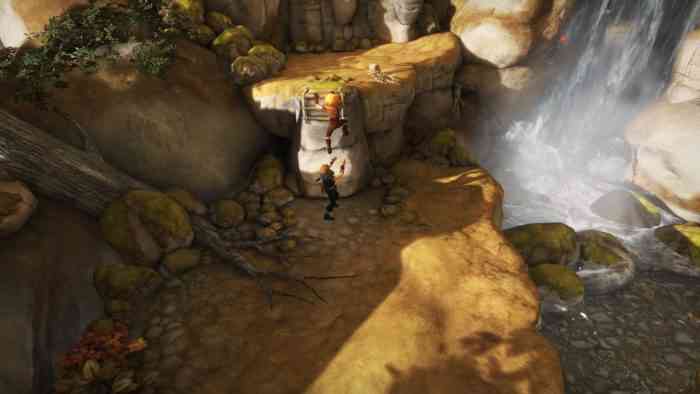 The co-op gameplay in Brothers is overly simplistic and so devoid of stimulation that I actually fell asleep mid-session one night. You still utilize only two controls, and every single stage and puzzle is even more anticlimactic.  Without the challenge of coordinating the two brothers by yourself, it becomes simply a game of walking around and pressing the action button when you’re near certain objects and absolutely nothing more. As my co-op partner put it, the game is “equal parts clunky and equal parts not challenging at all.”  It seems at worst like a failed platformer, and at best like an easy-going game suited for kids to play together.

While Brothers is charming and cute in its artistic style and presentation, the integrity of the game just truly takes a hit when co-op is involved. Hell, a warning even pops up on the main menu when you select the two-player mode informing you that the real experience lay in the single-player campaign. Not only was co-op so boring that my partner and I dreaded picking it up again each day, but it was glitchy and frustrating at many points as well. Both players have the ability to spin the camera using the L and R buttons, but at one point the game took it upon itself to spin in uncontrollable circles for a few minutes, making us dizzy and unable to continue. At other points, we would stand perfectly next to an object we were meant to pick up and bang on the “interact” buttons a thousand times before it finally decided to perform the action. These kinds of glitches were the most common, and by far the most frustrating. 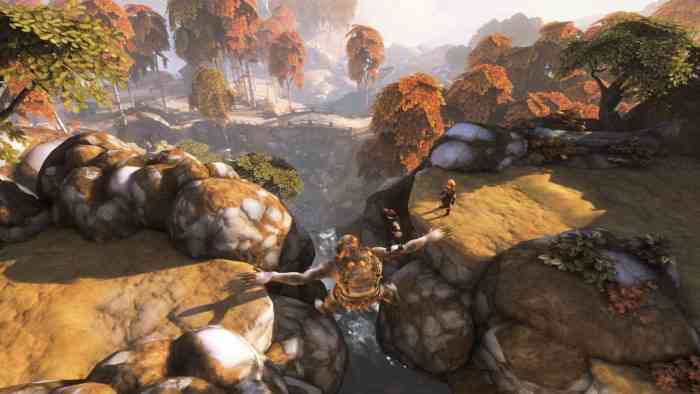 Brothers: A Tale of Two Sons looks like it would be a fun, artsy game to play with a buddy, but most of what you do feels like pointless busy work with almost no trace of the story past the two-minute mark. You’ll run around, climb things, pull levers and move objects, but in a way that requires virtually no thought or strategy. I’d definitely recommend this game to young siblings or children in general, as it is aesthetically pretty and very low pressure. For any other audience, I think the game would be too mindless in its objectives and too frustrating in its clunky-ness to merit even its $14.99 price tag.

Camped Out Setting Up It’s Tents Today on Switch and Steam
Next Little Friends: Dogs & Cats Review – A Bit of a Dog’s Breakfast
Previous Void Bastards Review – Fills a Glorious Void You Never Knew You Had