BROFORCE Review – We’ve Got a Bromance with this Amazing Platformer

Over the top. Bombastic. Jingoistic. And excessive explosions.

Are these descriptions of 1980s action movies or the videogame Broforce?

If you answered both, go to the head of the class.

Broforce is a love letter to those 1980 action movies of yore when Sylvester Stallone, Bruce Willis, Arnold Schwarzenegger, Chuck Norris, Kurt Russell et al were headliners and played their action hero roles more or less straight. Thirty years later you find them all congregating in a single Expendables movie largely poking fun at themselves.

Broforce kind of does the same thing in the guise of a platformer. The characters are based on 1980 iterations of the actors but the tone of the game is one where tongues are firmly planted in cheek. The graphics are done in 16 bit style bit style and its roots are so definitely console that it felt weird playing it on my PC. The controls are tight and responsive and while you can play the game with a keyboard, it cries for a joypad to play it properly given the frantic pace of the game.

Belying its 80 roots are the games options. They are as current as can be. You can play this game many ways – single or multi-player, be it offline or on. There are also several ways to play in each mode. Choices range from an Arcade one where level after level is thrown at you and the order of the levels is game controlled. In the World Campaign you get to pick the order of the levels. There’s a catch though. In World mode levels you have already finished can’t be restarted from where you left off, you have to restart the campaign.

“The controls are tight and responsive and while you can play the game with a keyboard, it cries for a joypad to play it properly given the frantic pace of the game.”

Each level or zone is finished by a Boss (Terrorkopter, General, Mammoth Kopter, Expendabros boss etc…). There are two Countries to play in, Vietnam and Kahzakstan. A third location is also on this map. The third location hints at a further expansion of the game’s scope for it is an island and the levels in this location are user generated. Yes, the game aggressively, and fittingly so, supports user designed levels which feed the third game playing option, the Campaign Mode.

The game comes with fifty levels to start. An additional game playing mode becomes available after thirty levels have been completed. At that point you can play multiple characters or “Bros,” as they are called in the game, at the same time. Beyond the game playing modes, Broforce offers a plethora of options for the video, audio, online settings, and game play that offer up a tweaker’s delight of setting up their own unique game playing experience. 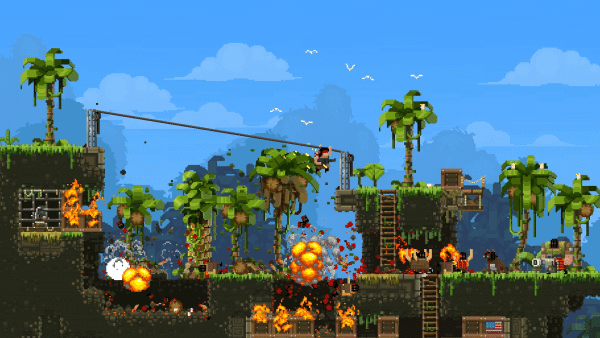 Speaking of “Bros” each of these characters ape an action movie hero with names like Rambro, Brobocop, Brommando, B.A. Broracus, BroHard, BroDredd Brominator, Bro In Black, and MacBrover to name just a few. Each character has a signature primary attack that mirrors their cinematic counterpart with some form of ranged weapon. Secondary attacks are some explosive or stunning type of attack. Switching between characters brings different strategies to the game.

Even the environments mimic the action movies of yore. Explosions come a plenty and in varied forms be it from weapons fire or bombs or exploding barrels or even air strikes! Total destruction abounds. Levels can be laid to ruin and allow you to choose to run amuck laying waste to everything or working with the existing layout to navigate a level. Things can get pretty hairy at times making it hard to take it everything that happens. You are as likely to suffer death via collateral damage as being killed from enemy fire.

“From the opening game logo with a screeching American Eagle with bulging biceps that barks out Broforce to the Army chopper that transports you to the start of a level and returns to pick you at the end, the game practically reeks of testosterone.”

From the opening game logo with a screeching American Eagle with bulging biceps that barks out Broforce to the Army chopper that transports you to the start of a level and returns to pick you at the end, the game practically reeks of testosterone. Because of these excesses, dying seems trivial; a mere mechanic that switches you to one of the other Bros. To counteract this, there is an online scoreboard that challenges you to finish the level as fast and as damaging as possible.

Developer Free Lives has an obvious love affair with the Rambos et al which shows up in spades in this game. They also go out of their way to engage their fans and make the game as open and democratic a platform as possible. With more characters and levels on the way, Broforce is positioned to kick ass and take no prisoners for a long time to come. 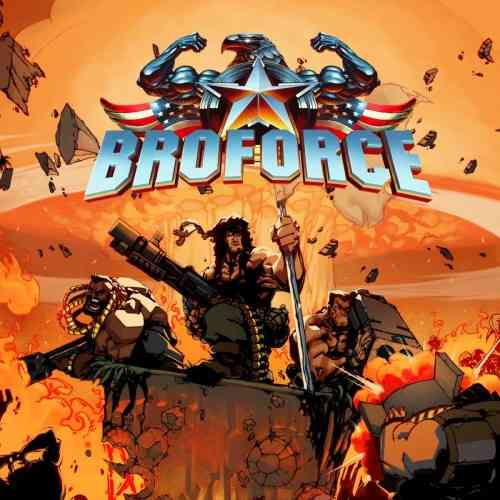