Bladed Fury, now out on Steam, is a feast for the eyes. Stunningly detailed, hand-crafted artwork carries the player through a tale of a princess framed by demons. You play as Ji, Princess to a kingdom where everything seems fine. You and your sister hang out most days and things seem chill.

One fateful night the tricky demons arrive. One possesses your father during an all-out attack. Being the badass fighting princess you are, you take out your demon dad, but not before others see you and declare you an assassin against the kingdom. As Ji you take your leave quickly, hoping to expose the truth and slay those who framed you and enslaved your kingdom.

While the setup is compelling, and the presentation packs heavy panache, the story itself isn’t much to write home about. And, unfortunately, the gameplay of this 2D action-scroller compounds that shallow feeling.

As Ji, you wield a few different kinds of weapons to dispatch your foes, from a giant blade to dual daggers. You have a dodge button, a shield to block, a double jump and… well, that’s kind of it. Yes, there are combos. Yeah, you can do bonus damage by lifting enemies into the air, but it all feels rather lifeless. Hits don’t land in a satisfying manner, most enemies and especially bosses are health bar sponges, and while you can do some Jedi-like parrying, it feels unnecessary. 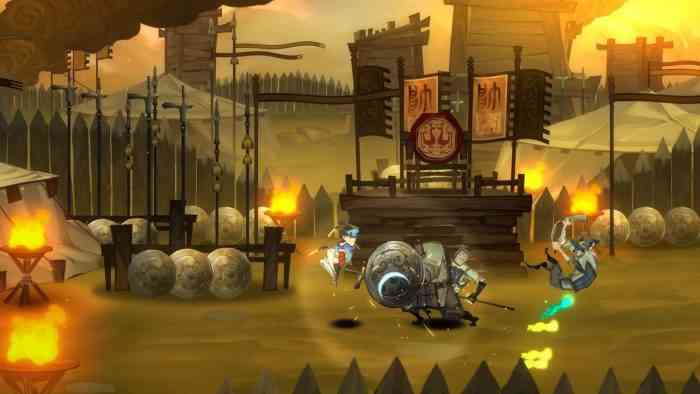 Enemies fall to your button mashing relatively quickly, and I never felt like taking damage was a big deal considering I had three healing potions on hand at all times. Later on, the game introduces Slivers, which are essentially one-button special attacks with limited uses but, again, I found it more effective to simply smash through the enemies with the default combos.

Other action games reward style and variety. They also design combos and weapons to encourage exploration and experimentation. Bladed Fury’s weapons don’t flow together, and once you’ve tried out the handful of combos that are available for each (a list you’ll run through pretty fast) you’re left with not much else to do. Even the upgrade system provides only enhancements to existing combos and moves, rarely adding anything new to the mix.

When you’re not fighting, you’re talking to NPCs or doing light platforming. And I do mean light. The game requires very little beyond a jump or two, hitting a switch, or finding a McGuffin. Rinse and repeat. Some of the later levels even try their hand at some interesting puzzly metroidvania and yet again it’s over pretty quickly and it was fairly easy to resolve in a linear fashion.

The characters you meet in your travels look very interesting and unique, but a lot of the dialogue they provide adds little to nothing to the story. I found myself often skipping through long talking sessions to get back to the action as NPCs continuously meander about their boring predicaments or unrelated backstories.

So what we have is a game with a strong look and little substance. And while the visuals present a striking world, nothing behind it holds it up. While I can’t help but praise the art direction, even that is not beyond the occasional fanservice, with certain female characters posing specifically to display their chests, or odd shots of your main character where her underwear is visible for no apparent reason.

Bladed Fury looks like an action game you’d want to play, but I’d recommend action fans do something else with their money, as there are other 2D games in this vein that do satisfy on the gameplay. If you’re really in a pinch, you won’t hate it. Bladed Fury is short, affordable, and a very cool art show with questionable fan service.

As for me, I’ll be polishing my fighting skills elsewhere.

Gestalt: Steam and Cinder is Easily The Most Fun I’ve Had During PAX Online 2020
Next Travis Strikes Again: No More Heroes Review – Edgy, Stylish and in Your Face
Previous Onimusha: Warlords Review – A Demon Slaying Classic