There is no question the original BioShock game was a spectacular achievement in visual design, story-telling and gameplay.  In many ways it was unlike anything I had played before and when I reflect on the game it is clear it has inspired many other games over the years including Bethesda’s recent smash hit Dishonored.  While BioShock 2 didn’t quite leave the same lasting impression for me as the first one did, it was nevertheless a solid sequel and sent us to even greater depths in the underwater city of Rapture.  This time, Ken Levine and company take us high into the sky to the floating city of Columbia.  Easily one of the most anticipated games of the year, BioShock Infinite arrives with a truck load of hype.  After all the hoopla is said and done, does BioShock Infinite take the franchise to new heights?  The answer to that question is easy and there is no question fans of the franchise will be able to pick this up with confidence.  That being said, there are some notable gameplay elements and occasional technical glitches that cast a shadow over the experience for me.

As far as the story is concerned, BioShock Infinite is complex and times hard to follow; however, it is one of the most compelling storylines I have seen in a game in quite some time.  To say that the story is deep featuring many layers is an understatement.  When you first jump into the game, the story appears relatively straightforward.  You play as agent Booker DeWitt who has fallen into some kind of serious debt.  The only way he can repay this debt is to launch up into the sky, find a young woman named Elizabeth who has been held captive for most of her life, and bring her back to New York.  If DeWitt succeeds, his debt is cleared – pretty simple stuff right.  In a nutshell that is the games starting point, but do not kid yourself as it gets a heck of lot of more complicated than that.  The floating City of Columbia features rebel and elitist groups who remain in conflict with one another.  Elizabeth is central to the conflict as she holds powers that manipulate the time-space continuum.  I would love to dive deeper into the games storyline but I have a feeling I would be spoiling the story for many if I divulge any more. 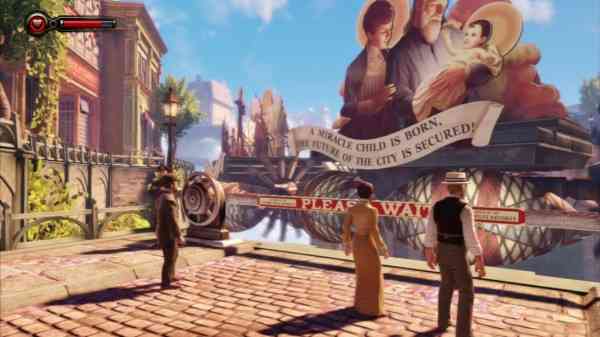 The story takes many twists and turns along the way, but in order to really understand what is going on I highly recommend you take the time to not only play the game uninterrupted but also seek out and listen to all the Voxophones located in the game.  They are personal recording devices that are scattered throughout the city of Columbia.  These audio diaries give additional insight into the events that help shape Columbia’s history and help you solve many mysteries along the way.  There are certainly times the story takes a backseat to the action, and like many shooters you don’t need to closely follow the story in order to complete the game.  Additionally, BioShock Infinite does not have different outcomes either, so it really doesn’t mater in terms of the choices you make or how you choose to dispose the enemies.  Nevertheless, in order to fully appreciate the BioShock Infinite experience one does indeed need to take the time and explore all in the ins and outs of the city.

At its core BioShock Infinite remains a shooter and the action is frantic at times.  You and Elizabeth are on the run from all sorts of characters and supernatural forces throughout the game.  Yet unlike other shooters where you are racing from one set piece to another, BioShock Infinite rewards you for slowing down and taking it all in.  As with the previous BioSearch, errrrr BioShock games, you spend a great deal of time searching.  By in large, I find having to search every nook and cranny of a game annoying but I did not find this to be the case here as the game rewards you for your efforts and I found the upgrades that I discovered really did make a difference.  Whether it be strengthening DeWitt’s health, picking up a lock pick or merely picking up some coins to spend on the vending machines, BioShock Infinite does a wonderful job keeping things interesting and forcing you in a non-subtle way to explore the game.

While I did enjoy the exploration, the action sequences and combat in BioShock Infinite is top notch.  I found the controls smooth and the guns felt great.  Granted, I did have to become accustomed to aiming down sights with the right stick.  It felt a tad unnatural, and given I’ve spent a lot of time with the Call of Duty franchise over the years I would often use up some of my Vigor juice (referred to as Salts) by accidently pressing the left trigger.  Regardless, everything from the machine guns to the sniper rifles feel great and certainly pack a punch.  Your special powers (Vigors) also give you an edge in combat and become critical towards the latter half of the game.  Previous BioShock games referred to these powers as Plasmids.  Vigors are essentially the same thing and work in the same way.  They can be upgraded and do such things as launch fireballs towards an enemy, pull enemies into traps, shoot electrical currents, send a flock of crows to stun your enemies, or launch enemies into the air.  I found I tended to lean more towards a few selected Vigors but really none of the Vigors stood out to be any better than the others. 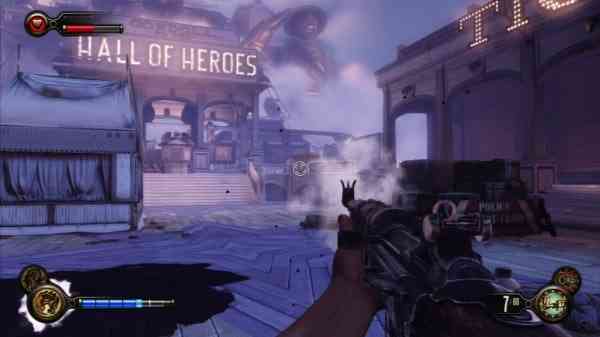 You will face hordes of enemies at times and you do encounter a few boss fights along the way.  There was a sense of familiarity with the combat but this is not a bad thing as I already indicated the combat is highly enjoyable.  I did encounter some framerate issues when the action became a little too chaotic for my Xbox 360 to handle, but otherwise most battle sequences played out as they should.  I also encountered a nasty little glitch when I ran into my first fireman boss.  After I killed him he did not drop the Vigor he was supposed to, and I searched all over for it and could not find it, so I was unable to proceed.  I ended up having to go back to a previous checkpoint and the second time I beat the enemy, the Vigor squirted out as he fell to his burning death.  I never encountered this situation again.   Not a deal breaker by any means but certainly an annoyance early on.

It took me about three sittings to get through the single player campaign so I figure it took around 10-hours or so to complete it.  This is an approximate number as I wasn’t closely watching the clock as I played.  Considering this is a ‘single player only’ game I found the campaign to be a little on the shorter side.  It would have been interesting if the development team could have included a co-op component, but sadly none exists.  Regardless, I found the single player campaign to be nicely paced featuring some extended cutscenes that are simply captivating.  Some of the backtracking however was a bit of let down.  I just find it a tad annoying having to make my way through a labyrinth of doors, make it to the end, and find out I have to go back the same way I entered.  Again, this was not a deal breaker but just more of those things that grated me when it came to the BioShock Infinite experience.

Other aspects of BioShock Infinite which really hit the mark were the relationship between Elizabeth and DeWitt.  The interaction between the two is fascinating and she frequently lends you a helping hand in combat by throwing you more Salts for your Vigors, more ammo, and even more health when you desperately need it.  It would have been nice if she would shoot down a baddie or two for you but that may have taken away from the combat.  Another interesting element is the Skyline railway system that winds its way all over Columbia like a Roller Coaster at Six Flags.  One press of the ‘A’ button and you latch onto a rail.  You can reverse directions or speed up and you can perform aerial attacks or use of the Skyline as a means to escape an intense battle.  It is certainly enjoyable to ride but a part of me feels it was tad underused and not fully realized. 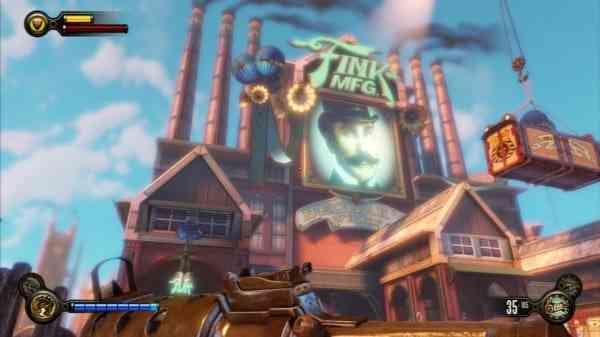 Visually, BioShock Infinite is a stunner.   The level of detail is simply stunning and the way Columbia transforms as you progress along in the campaign is brilliant.  Columbia is much brighter and more vibrant than Rapture.  Instead of tight spaces and dark dreary indoor environments, Columbia features many outdoor landscapes to go along with many indoor environments that reminded me of original BioShock.  It is a city in the sky and almost has an old amusement park feel to it.  The range of the colour palette is impressive to say the least.  At times the backdrop can appear murky but the detail right in front of you in undoubtedly ‘Triple A’ quality.  The texture work is rock solid, lighting is impressively dynamic, and the special effects easily top the two previous BioShock games.  Overall BioShock Infinite features an abundance of eye candy and those of you who can appreciate fantastic looking visuals will not be disappointed.

Complementing BioShock Infinite’s terrific look is sound that excels in all categories.  I am not sure what music sounded like back in 1912 but I bet it sounded very close to the tunes you hear in this game.  The musical score sets the perfect tone and matches the atmosphere to perfection.  The same goes for the games voice acting.  Elizabeth steals the show as her voice acting is highly believable and has you caring from the moment you lay you eyes on her.  I found everyone convincing and even those Voxophone audio logs contained voice acting that is not only memorable but highly believable as well.  The games sound effects are equally stunning as the attention to detail is quite remarkable.  From the horns that sound in the distance to the loud shrieks from the Songbird, not one detail is overlooked in the audio department.  There is indeed a level of polish here that frankly many other games could take a page from.

There is no question BioShock Infinite is a no-brainer purchase for fans of the franchise.  It undeniably lives up to the hype and delivers about the best 10-hours of a single player campaign I have experienced so far this year.  The story, albeit rather complex, is riveting and the gameplay is highly enjoyable.  BioShock Infinite also hits home runs in the visual and audio departments.  Some of the framerate issues, backtracking, and that nasty glitch I encountered when I ran into the first fireman, cast somewhat of a shadow over the entire experience though.  I also wish the game could have also been experienced in the form of a co-op mode.  Nevertheless, at the end of the day BioShock Infinite is an excellent game and one where you should get your money’s worth.