With the advent of PlayStation VR, I’ve come to find out that not all experiences are for everyone. As highly praised as games like EVE Valkyrie are, they didn’t do much for me outside of that initial rush of being in a new virtual reality world. Battlezone, for its stupendous UI, world-class presentation, and perfect movement controls, just isn’t the kind of VR game that gets me excited. There’s an inexplicable difference between sliding around its Tron-like environments on treads and hitting the pavement with rubber in DriveClub VR, a similar sort of cockpit experience. Battlezone plays it safe and it quickly lost my interest.

The biggest surprise while playing Battlezone is the importance of tactics as I initially expected to just zoom around the large arenas and zero-in on targets with my arsenal of weapons. However, jumping into the online mode, where you can pair up with other players and take on waves of enemies, emphasized the deep, tactical meta-game to successfully destroy targets without using up all your lives. Battlezone seems more suited to this type of co-operation as opposed to its single-player missions that have you fight wave after wave of enemy tanks all alone. The missions are chosen on a grid that has you move across it with each successful mission. To keep things from getting stale, as the actual missions aren’t all that creative,

“Battlezone seems more suited to this type of co-operation as opposed to its single-player missions that have you fight wave after wave of enemy tanks all alone.”

Battlezone throws increasingly overwhelming odds at the player that can be dealt with by following the grid to take down towers and eventually decrease the enemies output. The campaign stands as the games only mode and although it’s pretty straight forward, all the maps are procedurally generated and starting new games to test out the array of upgrades and tanks is encouraged.

Said upgrades are presented inside of your tank with a head motion to the right. Players can attain new wheels and also edit their loadouts although I stuck with my mid-range tank and standard missiles for the most part as they got the job done. Locking onto targets with the homing missiles and both seeing and feeling the impact never gets old, but some of the other weapons like the machine gun lack any oomph and are no fun to use. The other classes do indeed feel different and my advice would be to ease up on the boost when switching tanks as I tempted fate and almost got sick going all out. But that’s really it. 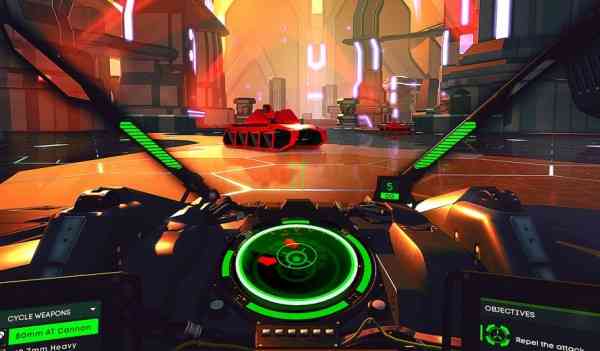 Battlezone isn’t much more than standard fare and I didn’t feel compelled by the decent set of gameplay mechanics to ever go back for more. Playing online with a co-ordinated squad with mics elevates the game and promotes the tactical nature of its battles, but that’s as good as it gets.

Battlezone’s biggest issue is its health system and the fits of rage that follow after losing a life without much explanation and eternally hitting the boost while your heart pounds with 1 HP remaining. The game’s resolution isn’t all that impressive, and I found myself confused and overwhelmed at times tracking the enemy tanks and flying saucers, and keeping check on my life status. All the while playing through Battlezone in VR, I couldn’t help but think how much it would suit the game to play on a 2D television at a higher resolution to solve some of these issues. While it’s fun to look around in VR and see what’s going on in your blind spot, it’s not so fun cranking your neck upwards to shoot aerial targets for the tenth time in a 5-minute match. 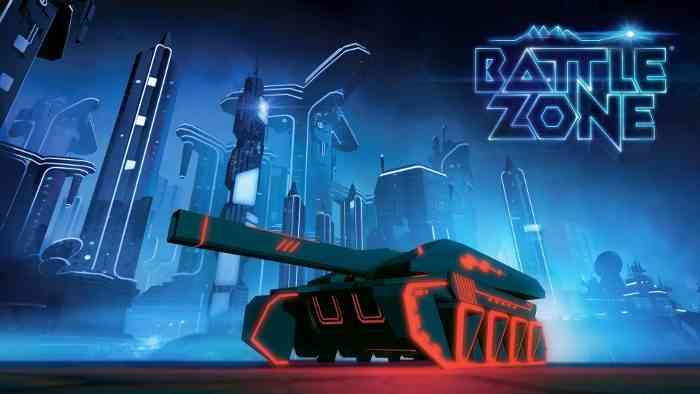 Battlezone is well-made in terms of its brilliant UI design and solid set of shooting and movement mechanics. However, the single player missions do not showcase the tactical brilliance of playing with real human players and the lack of any PvP online modes is almost a crime. Battlezone is a sound VR experience with an impressive loadout, upgrade system and a wide variety of environments to play in. It isn’t so fun though, when the resolution of those environments is distractingly low and compounds the games health system problem. Battlezone is a passable VR experience that might do well to transition itself to 2D televisions in order to appreciate the glowing neon environments of the game’s tank-filled future.