RPGs used to mean a slow, savage grind paced out over thirty or forty hours, punctuated by thrilling boss fights and bizarre interludes. You were subjecting yourself to an exercise in patience and perseverance. Those kinds of games still pop up from time to time, but they no longer represent the standard RPG experience. Battle Chasers: Nightwar is part of a brave new world. Now, every fight can be intense. Now, success is less about perseverance and more about skill. We’ve left the grind behind and embraced a more complete, moment-to-moment RPG experience.

Battle Chasers is adapted from a comic series of the same name. It’s nine issues long and I can’t recommend it highly enough if you haven’t read it. You control a band of adventurers from disparate backgrounds who share a penchant for trouble. The game’s narrative skips the origin story and drops you right in the middle of their latest quest. Maybe quest is the wrong word. You literally crash-land in the middle of someone else’s problem and decide it’s your business as well. What follows feels like just the right amount of story. I learned enough to stay curious, yet I was never bogged down with wave after wave of story. Instead, every development is interspersed with a heaping helping of glorious battle.

Enemy encounters all come with a certain amount of tension. You never feel like this is going to be another routine battle unless you’ve wandered back to a previous zone. As long as you’re pressing forward, things can go south in a hurry. Your stats grow slowly, the enemies are ever-stronger and proper strategy is persistently essential. I had a difficult time getting through this game. As soon as I got comfortable fighting a certain subset of enemies, the next tier would quickly annihilate me. A moment’s distraction was all they needed to sneak through my defenses and eliminate my party. You can’t mindlessly power through these battles. I was taught this lesson over and over until I started directing all my focus towards the task at hand.

“Thankfully, these difficult fights are made ceaselessly compelling by the combat mechanics.”

Thankfully, these difficult fights are made ceaselessly compelling by the combat mechanics. Even in the hazy hours of the evening, barely able to keep my head upright, I could still find the focus required for just a few more encounters. In fact, it’s a real shame I have to stop playing in order to write this review. Damage dealt is divided into Actions, Abilities, and Bursts. These options go from free to crazy expensive, in that order. You could spend the whole time unleashing Abilities, but you’d be bereft of mana almost immediately. Instead, you want to use Actions to build up Overcharge, which is basically free mana stacked on top of your actual supply. This turns regular battles into this dance, where Actions and Abilities and Bursts follow one another in a careful rhythm. Then, when a savage boss battle has you pinned to the wall, you can discard this safety net and start draining your stores of magic in order to secure your victory. 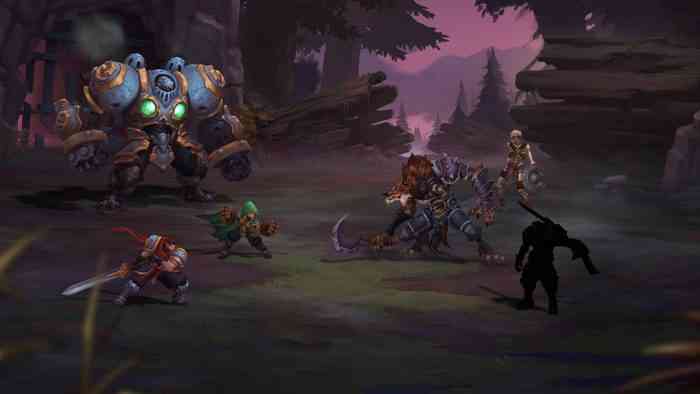 Another factor that influences combat? Time. Your Actions are instant, while Abilities take time to unleash. So, not only do you need time to build up Overcharge, but you need more time to actually pull off your best moves. This means more on-the-spot planning, especially in a dungeon where all the enemies are four levels higher than you. If you can quickly get shields or taunts up, that means more room to charge up a huge attack. Casting time equals vulnerability after all. It’s not like you can do anything else while you’re powering up a spell. Bursts are instant, but they take a lot of time to recharge. Successful battles come down to balancing all three flavors of attack, while simultaneously managing defense, healing, and debuffs. Don’t forget about debuffs! Things like poison, paralysis, and curses work on everyone. There were a number of battles I won while basically dead on my feet, simply due to a huge stack of debuffs all kicking in at once. 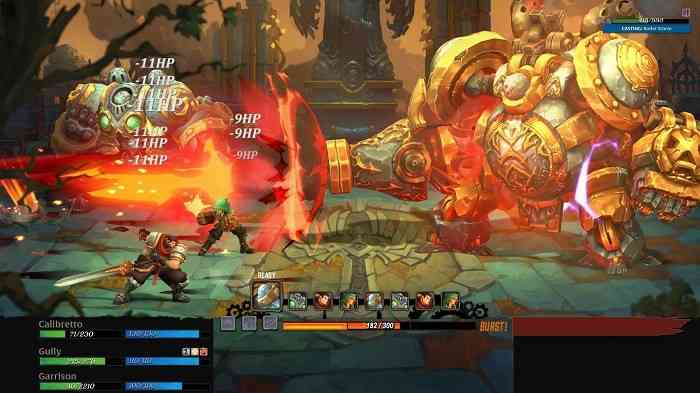 Let’s spare a moment for the music. While I appreciate the graphics on display here, they function more as a vehicle that gets me to the mechanical meat of this game. The music is a different story, however. The battle theme is stuck in my head right now, with the quick little victory fanfare running on repeat no matter what I do. The boss battle track is foreboding and insistent. Every new environment comes with a change in tune, one that immediately buries itself in my brain for the rest of the day. Earlier, it might have seemed like I was downplaying Battle Chasers’ visual fidelity. That would be a foolish move to make. Nightwar is the comic series brought to life. Each of the playable characters is an exceptional representation of their comic counterparts. The battle animations are fluid and graceful. The stages themselves are loaded with tiny details that encourage you to stop and take everything in. Though the enemy designs aren’t as varied as I’d like, each region of the island does have a tailored selection of opponents. Battle Chasers’ presentation carves a space in your head with plans to establish a permanent residence.

“Battle Chasers’ presentation carves a space in your head with plans to establish a permanent residence.”

While most of the mechanics are rock solid, there are a couple of elements that slow things down. You can swap out perks, party members, and equipment seamlessly enough. If one character’s bonuses aren’t doing you any favors you can swap them out immediately. The problem arises when switching party members themselves. Yes, you can bring someone in from the benches, but they haven’t been gaining experience while they’ve been cooling their heels. So, if you’ve got two fighters at level 18 and one at level 9, you’re more or less dragging a practice dummy with you to every battle. Most of the gear you find is locked to a certain level, as well. On top of that, gaining levels is a somewhat slow process in the first place. You don’t notice how long it takes when you’re moving through the game normally. As soon as you need to bring someone up to speed though, it gets a little daunting. I’m technically not locked into my current party, but it can feel that way. Finally, putting the various crafting tables ass-deep in each of the dungeons is a great way to ensure that I don’t craft things, ever.

Everyone’s experience with RPGs is a little different. Perhaps your first RPG involved actual role-playing. Maybe you wandered an enormous open world for a couple hundred hours. Or, like me, you got your start grinding levels like a lunatic, struggling to surmount one more wall before the sun came up. No matter your origins, the landscape of the genre is always evolving. Role-playing and adventure games are constantly stepping forward and back, merging aesthetics with ideas once separated by whole decades. Battle Chasers: Nightwar represents a fascinating blend of comforting tropes and freshly-broken ground. Blistering, brainy combat is tucked into a gorgeous package rife with excitement and fun. Regardless of your spot on the RPG spectrum, Battle Chasers: Nightwar is one game you won’t want to miss. 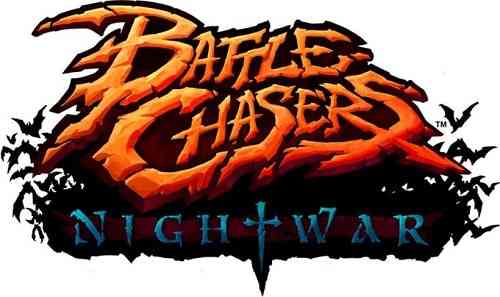