Ary and the Secret of Seasons Review – An Imperfect Storm

Ary and the Secret of Seasons Review

Ary and the Secret of Seasons is the tale of a defiant young girl who takes the fate of the world into her own hands when evil strikes. The daughter of a Guardian responsible for the security and status quo of the winter region of Valdi, Aryelle must harness the magical powers of the seasons and use them to save the world from peril. It’s an upbeat indie adventure that’s perfect for kids and undeniably full of charm, but unfortunately, it feels incomplete and unpolished in ways that wear away this charm all too fast.

Ary and the Secret of Seasons begins in the wintery mountain town of Yule, where Ary lives with her family. Devastated by the recent disappearance of her brother, her grieving father cannot complete his duties as a Guardian: one of four seasonal protectors who each maintain their own regions of Valdi. When a dark force spreads throughout Valdi and disrupts the seasons, Ary takes her father’s place as the Guardian of Winter to try to find her brother and save the world from destruction.

Ary herself is amicable and innocent, with an untiring will to do the right thing and a disposition to never take ‘no’ for an answer. Her childish quips never lose their optimism, even when facing battle or betrayal. Ary’s innocence is reflected in the overall tone of the game, with cheesy voice acting and silly characters filling the cutscenes and whimsical music lulling in the background.

Beneath its surface, certain plotlines in Ary are actually quite dark. The royal family secretly abducts children and forces them to labor in mines, where their cries can be heard echoing through the cave walls. The Summer Golem, a significant character that appears to be a whale made of stone, wallows in a lonely existence at the bottom of a pit, wistfully remembering the distant calls of a pod that’s since forgotten about him. The game paints over these sad themes with a cheery coat of optimism, which is all part of the feel-good experience. Everything is light and happy, even when it isn’t. 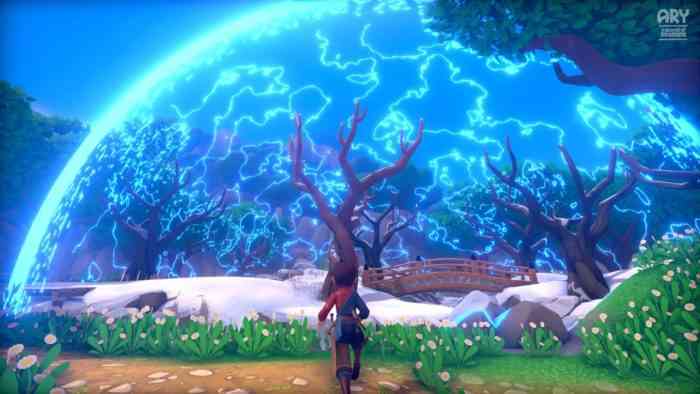 Throughout the game, Ary gains the crystals of each Guardian, granting her the power to control different seasons. Using the crystals, she can cast spheres that encompass small regions in front of her and change her environment to reveal secrets and manipulate puzzles. Depending on the puzzle, these seasons can perform many different functions. For example, the winter sphere can be used to reveal ice platforms that can be used to jump to hard-to-reach places, while the autumn sphere can create pools of water in wide expanses that Ary can swim across. In certain temples, the spring sphere can create pockets of air underwater that allow Ary to walk and function normally when swimming is not ideal. In other areas, the spring sphere can reveal climbable vines or also add pools of water. The variety of applications for each of the different seasons are impressive in their creativity, and are truly a unique spin on Zelda-esque traversal puzzles.

In addition to modifying the environment, the spheres can also affect different enemies that Ary comes across. Certain enemies can be frozen and transformed into ice blocks with the winter sphere, and can then be pushed around and used as platforms. Others will have shields that can be melted with the summer sphere, rendering them vulnerable. Later on in the game, Ary will also acquire a slingshot that can utilize different seasons to hit objects such as switches and panels. While most of the game is simple and straightforward, the temples and puzzles are actually quite challenging at times, and there’s a definite art to figuring out which seasons to apply and how they will affect different objects or climates in the world. It’s a true joy to uncover different secrets both on the map and in the temples, from banishing obstructive passageways to reveal hidden chests or creating platforms to climb on.

Ary’s gameplay premise is undeniably interesting, but too much of its execution is mediocre at best. One glaring issue is the inexcusably dreadful performance that’s apparent right from the opening cutscene. Enormous screen tears scrape across the display at every cutscene or in-game camera rotation, and rear up anytime Ary jumps or runs up a staircase. When I played the demo earlier this month, I assumed the terrible screen tearing was an unintentional circumstance of the game’s pre-release build that would be fixed before the official launch, and thus omitted this criticism from my published preview. I played the demo on a PC running Windows 10 with a GeForce GTX 1660 Ti graphics card and a G-sync monitor, and have now played the full game on two separate TVs on a PS4 that has recently run games like Ghost of Tsushima and The Last of Us Part II to near perfection — and still, the abhorrent screen tears persist. Either Ary is graphically defective, or my gaming rigs are just not up to snuff to run a game as confoundingly demanding as this. I am strongly inclined to lean towards the former. 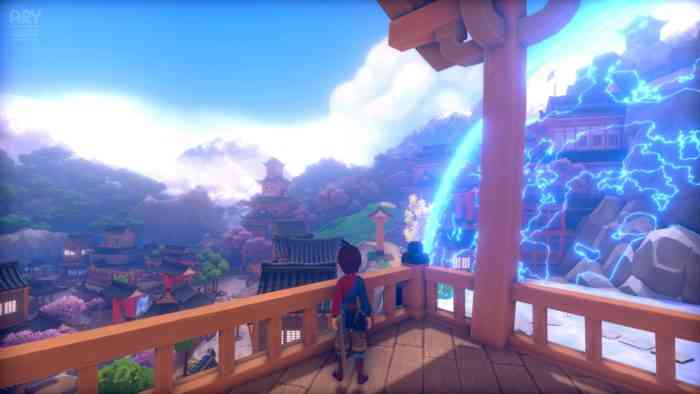 Screen tearing is not the only graphical issue with Ary. Each time you complete a quest, there’s an animation that features a close-up of Ary and a banner on the bottom saying “Quest Completed.” 10 out of 10 times, this animation will be choppy and glitch out at the end, and it’s far from being the only example. Many of the animations and cutscenes are choppy, and there are tons of discrepancies on the map and in the world where characters will display speech prompts but will not actually have any dialogue or interaction available. Had this game received more attention during testing, it could have been much more immersive and compelling than it is.

Certain design choices in Ary also work to tarnish the experience. The camera angles are often problematic, with combat sometimes prompting the camera to zoom out so far that it makes viewing the action nearly impossible. Occasionally, the exact opposite occurs, causing the camera to zoom in so close during a boss battle that the health bar above the enemy’s head cuts out of view — a hindrance when you’re not sure if you’re effectively using the right strategy to inflict damage.

The map is also very frustrating to navigate: Icons go completely unexplained on the map menu, and the mini-map is littered with markers that don’t differentiate between side quests you’re currently working on, NCPs you’ve already spoken to or that can be interacted with, or quests you’ve already picked up. It can be infuriating at times to simply get back to a quest-giver if you don’t remember exactly how to retrace your steps, and in turn you will end up revisiting every question mark on the map repeatedly until you find the right character. 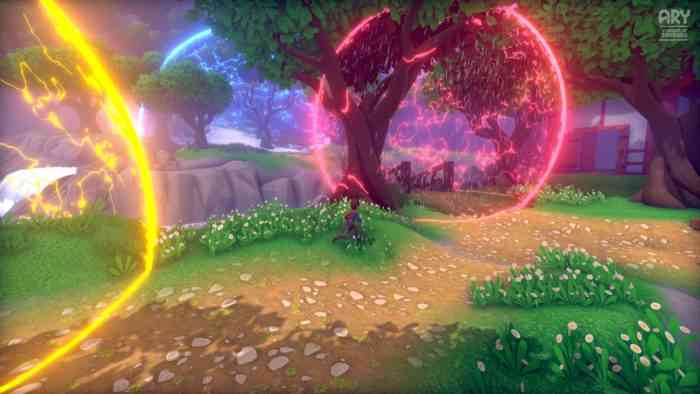 Combat is one of the game’s most flagrant weak spots, with nothing more than a basic quick attack and a parrying move to operate with. You’ll spend a lot of time dodge rolling, since combat can be hard to see and enemies can shave down Ary’s health deceptively fast. Unless there’s a chest or a lever nearby, it’s almost never necessary to fight, and it’s easy enough to run past enemies. There’s no XP gain or rewards to be collected from fallen enemies, and the only upgrades you can unlock for combat can be purchased from merchants around the world. These upgrades can only be applied to increase stats such as combat agility and damage rather than providing any new abilities or attacks, making them fairly unexciting and questionable in their necessity considering how easy the enemies are to defeat or ignore entirely.

The world of Valdi is charming in theory, but poorly designed and spiritless in practice. Each of the regions you visit are vastly different from one another in culture, but they all feature maps that are far too big and empty to feel justified. Too much of your time will be spent running across wide expanses of land that feel as though they were only stretched out to add time to the game. There are also a ton of pointless facades that try to add complexity to the map without actually doing so. Lammastide, the game’s summer region, is chock full of archways that lead to empty dummy rooms, passageways to nowhere and dead ends that make the city look as if it has more alleyways and buildings than it actually does. The town feels oddly incomplete, and it’s a strange — and almost archaic — choice to have decorated doorways everywhere that merely lead to vacant shells.

The fact that there are so many incomplete rooms and dead ends everywhere isn’t a huge loss, though, considering exploration is fruitless enough to merit blowing past entirely. Side quests are seldom worth your time and consist only of fetching trinkets for petty rewards, should you receive one at all. The only worthwhile exploration happens in temples, where seeking out chests can reward you with special gear essential to progressing through the puzzles. 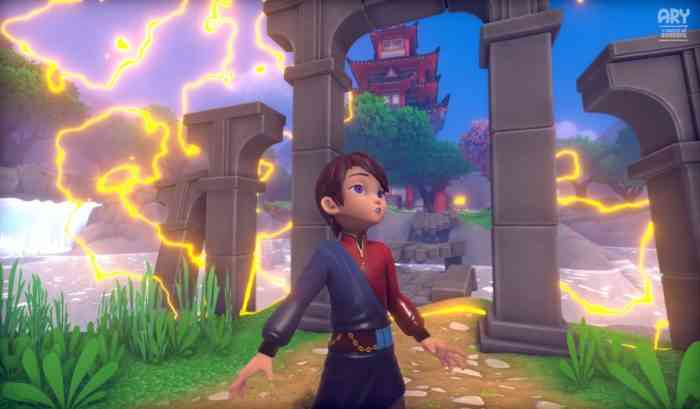 Ary and the Secret of Seasons reminds me greatly of an animated children’s film. It also reminds me of an early-2000s online computer game for kids, complete with choppy cutscenes and terrible graphical performance. There’s a ton of charm to be found in the soft animation and the silly characters, but there’s also a disappointing level of detail that’s missing from this unpolished adventure. It shines in its core gameplay, where the puzzles are challenging and fresh and the use of seasonal magic is truly unique and worthy of praise. The soundtrack is lovely, and there’s certainly enough enjoyment in the completion of the game’s temples to keep you coming back for more. It’s an absolutely excellent game for children that will no doubt become their new favorite adventure, but the awful performance will be difficult for adults to overlook, and there’s an unfortunate lack of depth in the game’s side content. Ultimately, this game would have benefited from more time both in testing and on the drawing board. A more sophisticated combat system, less cheesy storytelling, more embellishment on exploration, and animations that are far less glitchy would have done Ary and the Secret of Seasons the justice it sincerely deserves.