Anomaly 2 is the follow up to the successful 2011 game, Anomaly: Warzone Earth. You play as one of the last remaining convoys on a frozen Earth, looking for supplies to keep going while fighting your way through mechanical alien towers, hell bent on destroying you. Your main goal is to punch through the alien forces to the anomaly and finally defeat the aliens. In what is, in essence, a ramped up, reverse tower defense game, you play as a squad leader who has to lead your convoy of vehicles through the briar patch of alien towers and come out the other side intact. While this sounds simplistic, I can assure you that you will have tons of fun trying to navigate all the tricks and traps they throw at you!

Set in the same frozen, dystopic world where an alien anomaly (that’s the name of the game!) has engulfed a third of the planet and plunged the rest of the world into a new ice age, your goal is to fight your way through a multitude of alien towers and rescue a series of scientists who have been creating a new weapon to help wipe out the alien threat. Upon rescuing the scientists, you fight your way into said anomaly for a final showdown with the evil alien machines.

In order to do this, you are given a variety of vehicles as the game unfolds and you encounter new towers and especially difficult terrain. These units each has their own unique purpose to help you navigate through what otherwise would be a bloodbath. There are units with ranged cannons, heavy machine guns, heavy armoured units, and special units that can cloak you, shield you or spawn you abilities. Each unit also comes with an alternate mode that you can ‘morph’ them into. Yes, your vehicles are basically transformers, turning from tanks into mechs or choppers or what have you. Basically, each morph gives them a new set of weapons for different combat situations and you will definitely need them. As the Captain, you’re goal is to build a convoy of up to six vehicles that will best get your across the map. You also have to lay out the best route for your convoy as well as use your abilities, such as healing, EMP, decoy or special targeting, in order to ensure the safety of your men.

While the gameplay itself is slightly repetitive, aka blow up towers, they mix it up enough that it is always entertaining and challenging. Think you’ve got it all figured out? Oh, sorry, now there are exploding towers or towers that only target specific units or towers you can’t see on the map. With a diverse range of enemies as well as a full complement of your own vehicles that are constantly needing care or switching forms in order to deal with any manner of things on the constantly evolving battlefield, you never really get a chance to sit back and relax. You also have the ability to collect a mineral that allows you to buy new units on the fly, or upgrade your current units, upping all of their stats. This comes seriously in handy when wading into a tower dense region and you’ve just upgraded your heavy support vehicle who can now take all manner of bombardments. You also can replay each level at varying degrees of difficulty (trust me, nightmare isn’t exaggerating) and they also award trophies at the end of each level based on how many towers you’ve destroyed, the route taken and how quickly you finished the mission. If you’re a trophy hound, this will add endless replay as you try to get all three gold trophies for each level and difficulty (good luck!). 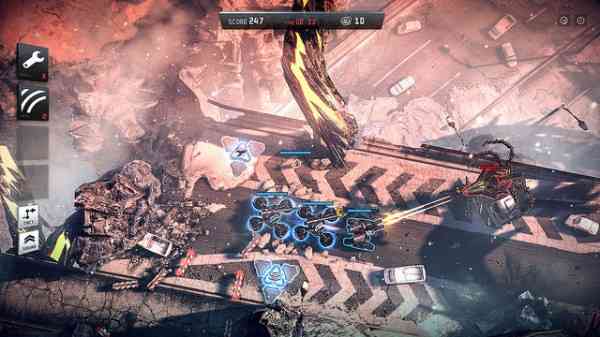 There’s also an online component where you take on an opponent as either the tanks or the towers and try to outlast them. Each side has a special unit which gives out extra points, so planning is crucial when taking on another savvy player. While being fun, it wasn’t enough fun to consistently pull me back in due to the lengthy matchmaking times. However, if you can find matches quickly, I could definitely see it becoming a regular mode of play.

The graphics are far from mind blowing, but it thankfully doesn’t suffer from being ported over from the PC. While maybe not utilizing the PS4 to its full potential, it has no real need to as the maps are rendered well and the gameplay doesn’t require cutting edge graphics to maximize the fun you’ll have. As for the music in the game, I actually had to turn the game back on to address this because I couldn’t even remember hearing any. So, it does a nice job of filling in the background, but the exploding towers and trash talking from your troops definitely drowns it out.

Overall, Anomaly 2 takes the tower defense model, flips it, adds some bells and whistles and makes one hell of a fun time out of it. While not having the most extensive story and somewhat repetitive gameplay, Anomaly 2 makes up for it by throwing in enough in game variations to keep you interested as well as having quite challenging difficulty curves to keep you coming back. As well, the online component suffers from long wait times, but when you get a match, there’s a certain satisfaction with being able to outwit another human player or the frustration of being outwitted. I genuinely had a fun time playing and if you’re a fan of the tower defense style, I recommend you pick up a copy. 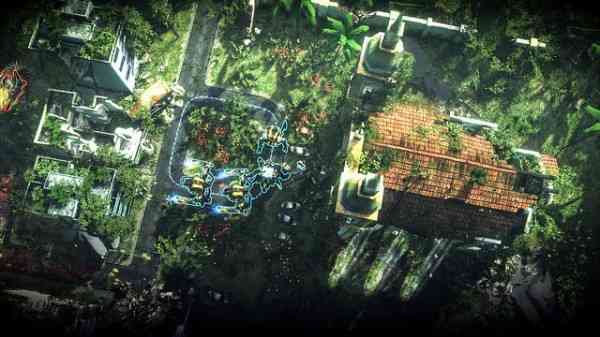